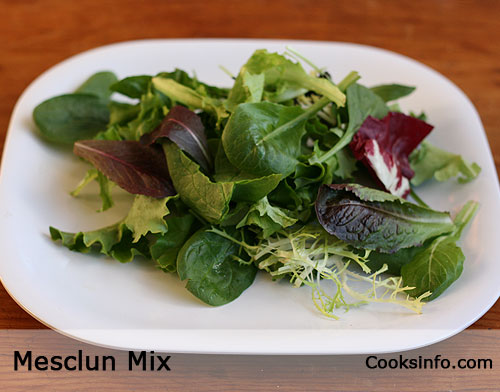 Mesclun Mix is not one single type of kind of salad green, but rather, as the name states, a mix.

The contents of the mix will vary. It often contains leaves such as baby spinach, curly endive, dandelion, lamb’s lettuce, mizuna, purslane, red chicory, red oak leaf lettuce, rocket, and romaine. Generally, it will be a balance of sweet and bitter greens.

You can buy also packages of Mesclun Mix seeds for your garden.

Mesclun Mix has been made for hundreds of years around Nice in Southern France. The mix traditionally was rocket, chervil, endive and lettuce. The mix first appeared in North America in the mid-1980s. By 1998, a New York Times food critic, Marian Burros, complained that supermarkets were already “dumbing down” the mixture.

This web site generates income from affiliated links and ads at no cost to you to fund continued research · Information on this site is Copyright © 2022· Feel free to cite correctly, but copying whole pages for your website is content theft and will be DCMA'd.
Tagged With: French Food, Leafy Vegetables, Salads