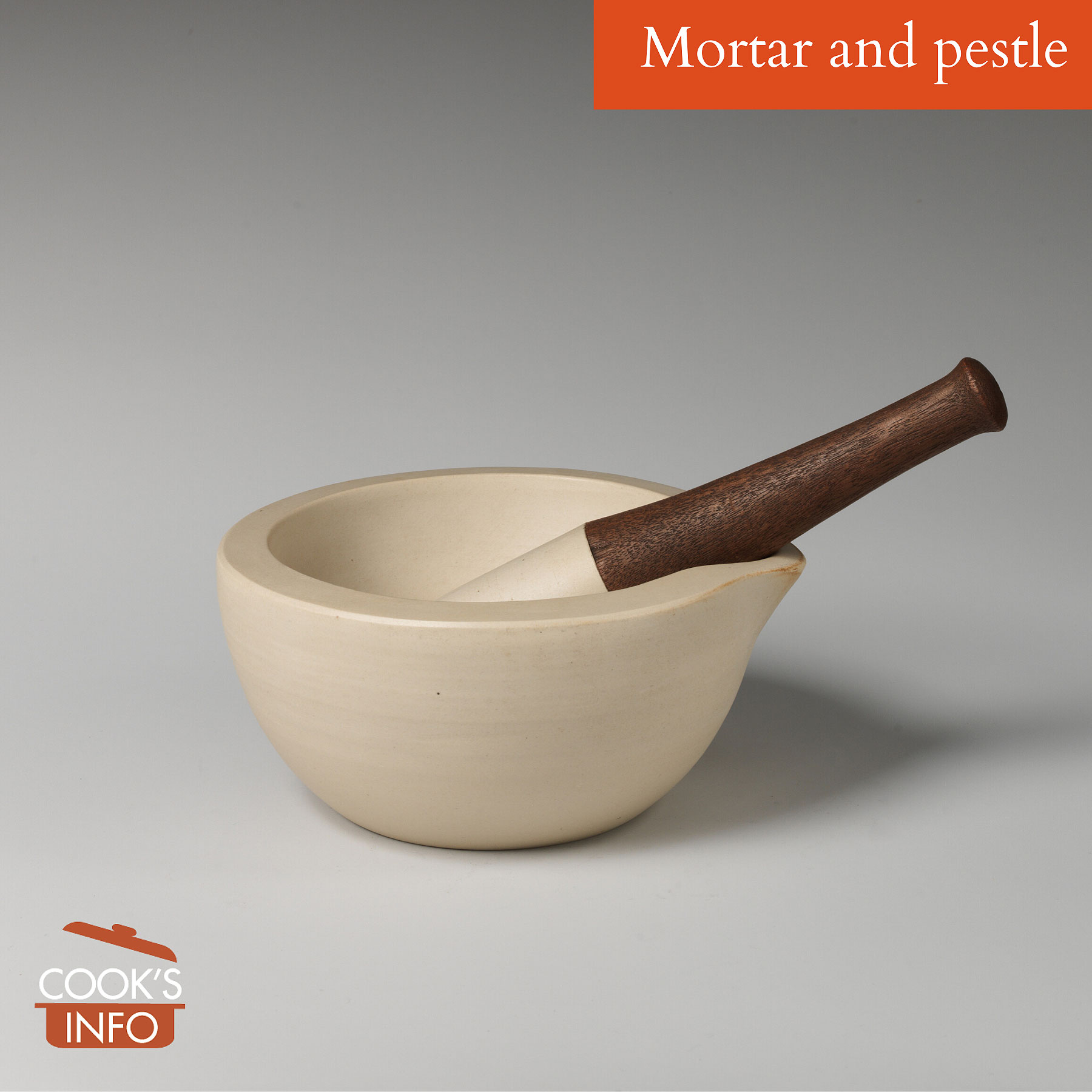 A mortar and pestle is a heavy bowl that comes with a short, blunt, thick stick that looks like a miniature baseball bat. It is made of heavy material that can stand up to pounding.

It is a multipurpose tool used for grinding, crushing and puréeing, and for making pastes and powders.

Types of mortars and pestles

The basics are that it has to have an abrasive surface, either on the surface of the bowl, or the tip of the pestle, or both. 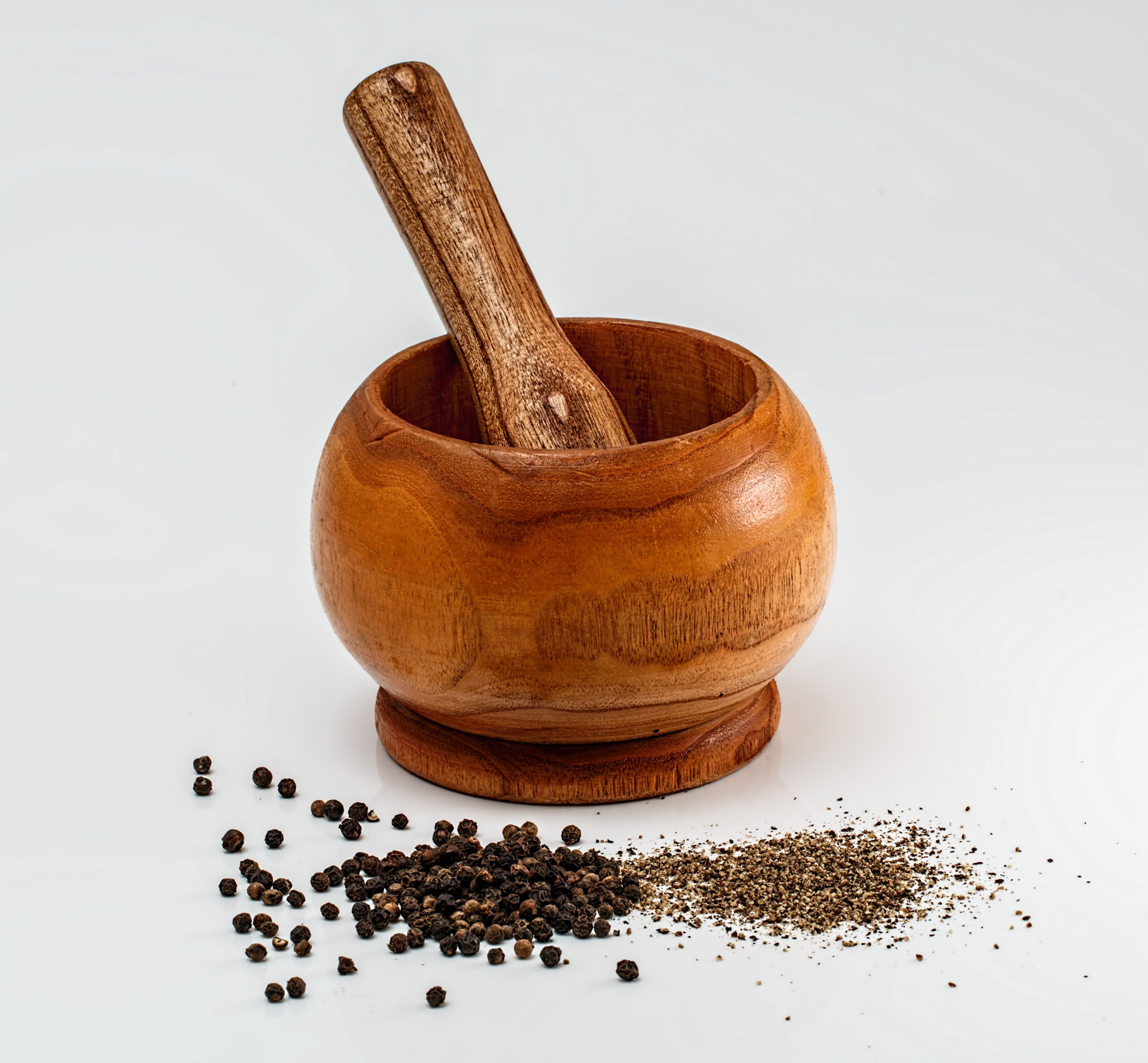 Wooden ones are best reserved for dry ingredients, because over time putting moist ingredients in them may cause them to deteriorate.

Earthenware ones have the advantage that they can be made with grooved inner surfaces, which augment the grinding being done.

Some stainless steel ones come with mesh inserts of varying fineness; as you grind, only particles that fit the fineness of the chosen mesh pass through it. 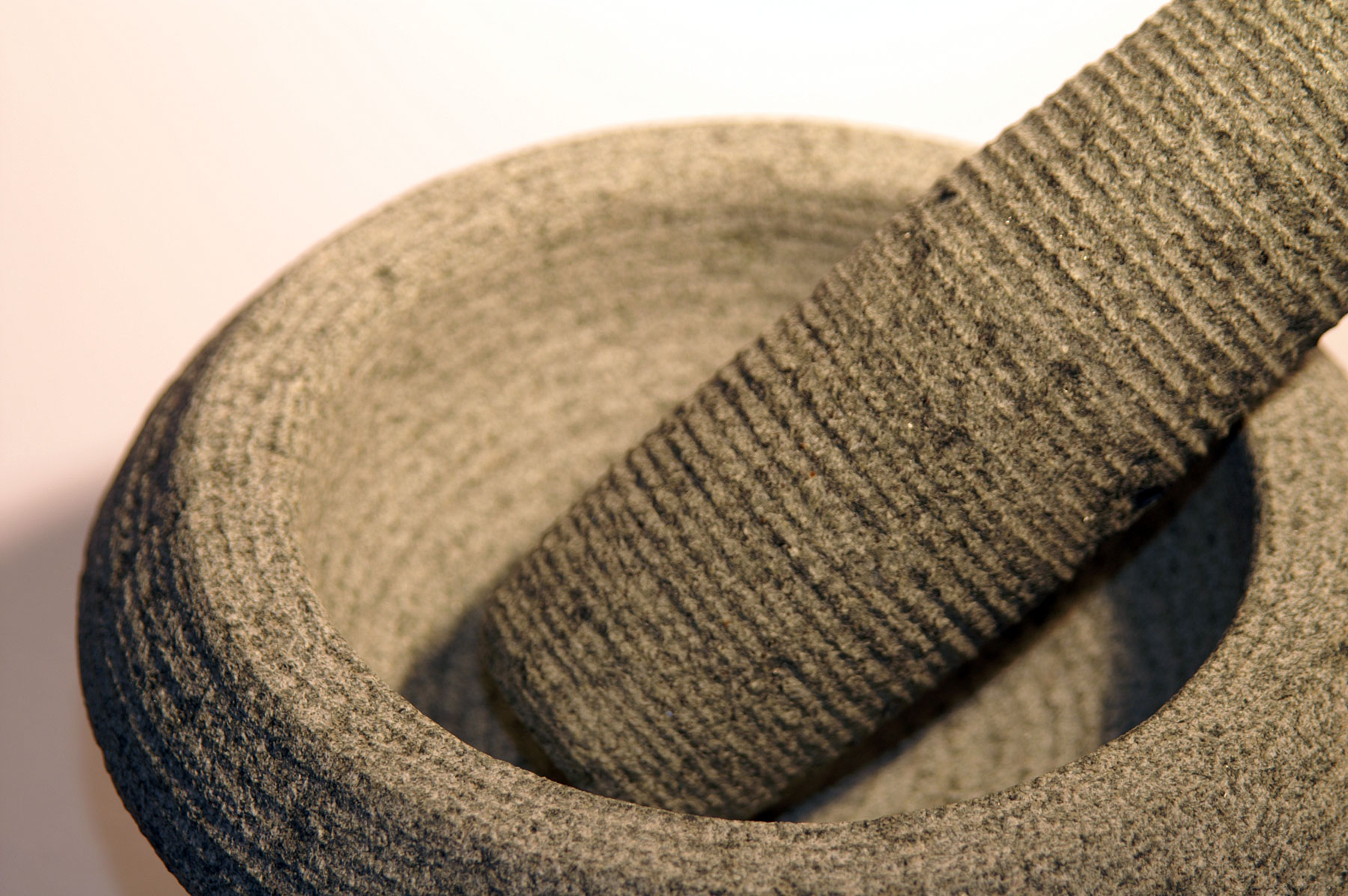 Using a mortar and pestle

The pounding is done in a bowl, rather than just on a flat surface, as a flat surface would allow things to fall off as you were pounding them. A bowl also keeps things continually falling back to the centre where you are concentrating the force of the pounding.

You put the items being ground in the bowl, and press down on them with the tip of the pestle and while pressing down, move them in a circle. The abrasive surface plus the pressure is what does the trick. 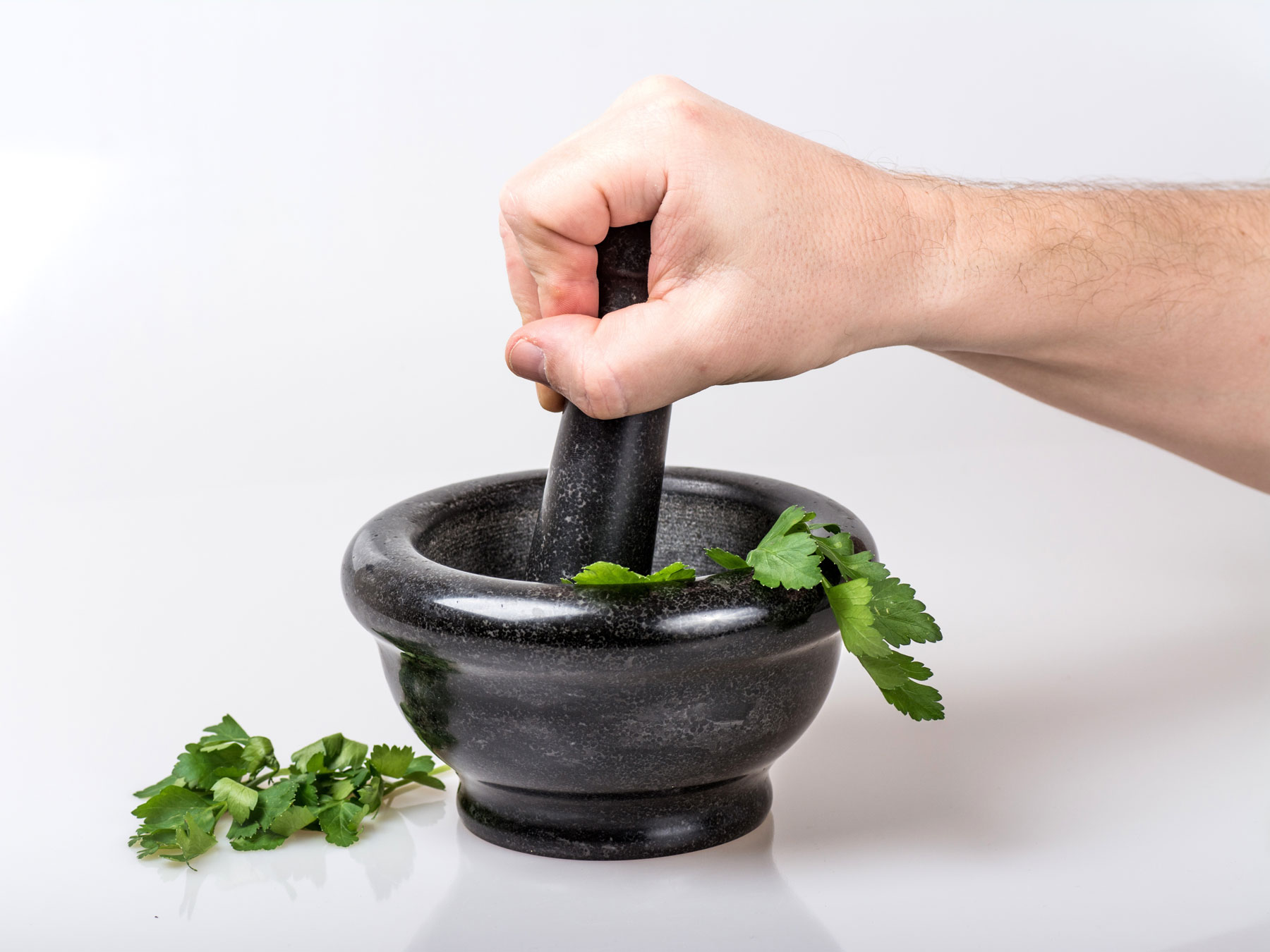 Buying a mortar and pestle

Don’t purchase a mortar and pestle based on looks alone, unless you plan only to display it as a decorative item.

Make sure the pestle feels comfortable in your hand, and that it feels like it is going to come right up against the surface of the mortar as you use it.

Deeper mortars are better because the ingredients won’t get pushed out, though if you’re just ever going to crush minute quantities of spices, a small one is fine. If you’re going to use it for large amounts of ingredients, hold out for a larger one.

Not all are dishwasher safe.

Mortar and pestles were and are used throughout the world. They even sprang up in the New World long before any contact with the Old World. They are the lone survivor of tools and methods going back to the Palaeolithic era that used to be used on a much broader scale for things even such as making your own flour.

Some enthusiasts say that items prepared in a mortar and pestle can have a better texture than those prepared by mechanical means. Some go so far as to say the taste is even better. Still, it is really only used now for small quantities of items — not even the most wild-eyed mortar and pestle enthusiast is going to be grinding up a week’s supply of bread flour in one.

Some variations of mortars and pestles rely on “impact grinding.” These variations include mochi pounders in Japan, the samps used by North American settlers, and the rice pounders used in the Philippines. In Japan, the large Japanese pestles are hammer-shaped; you fling them over your shoulder to bash rice in the large mortar.

You can also buy reproduction Roman mortars and pestles. They are about as large as medium-sized mixing bowls, either with sloping sides with the top wider than the bottom or almost completely flat with straight sides. Both kinds have a lip on them for pouring out the ingredients when finished. 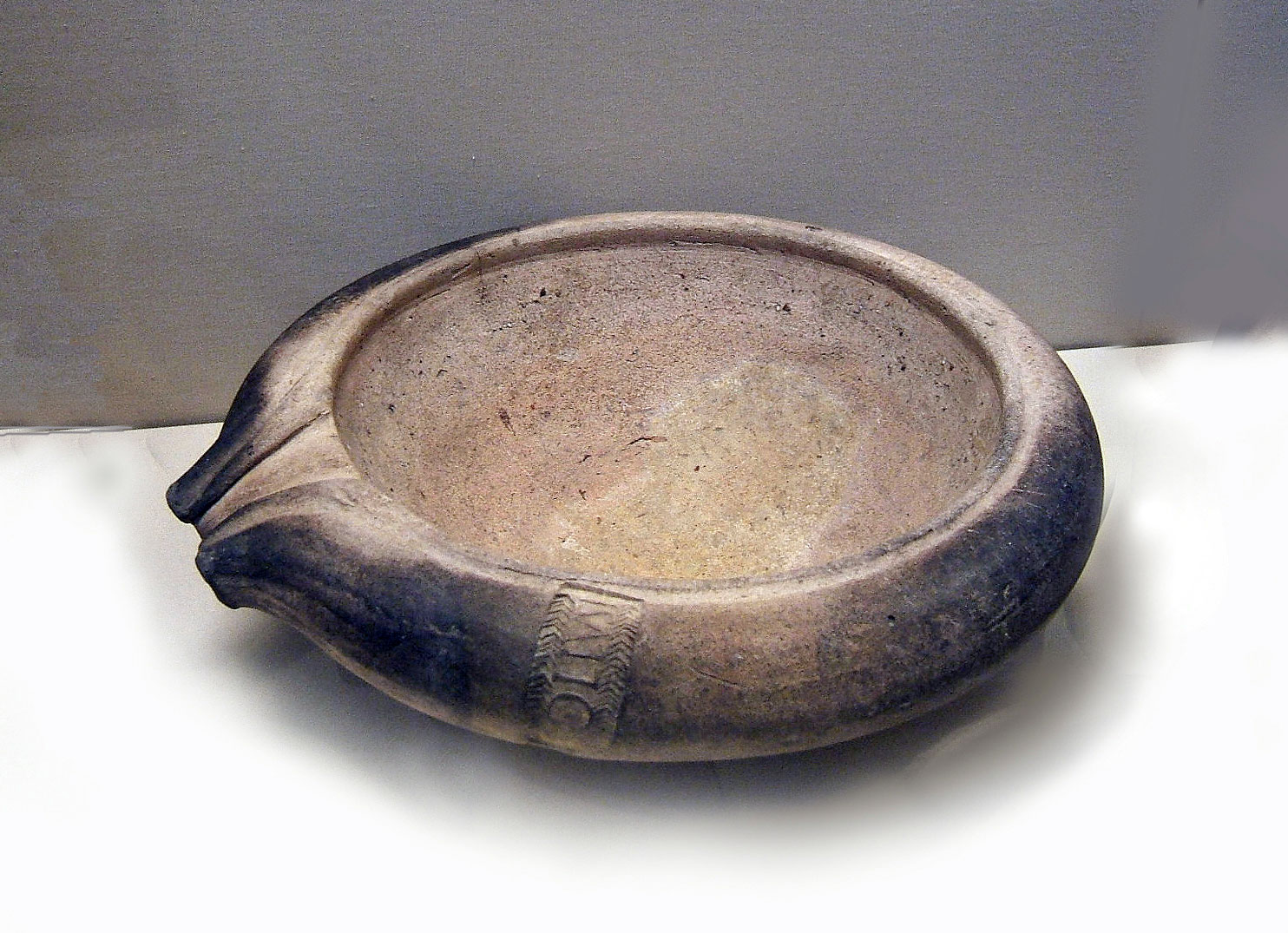 Roman pottery mortar, used for food preparation, found in London. It was made in Britain, and is stamped on the rim with the name of the manufacturer, Sollus. 1st century AD. Diameter 30 cm / 12 inches. AgTigress / wikimedia / 2010 / CC BY-SA 3.0

The mortar and pestle family 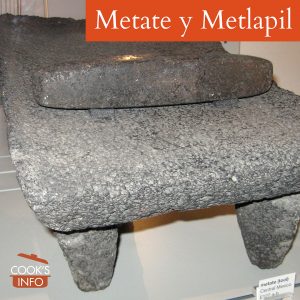 A "metate y metlapil" is a Mexican mortar and pestle for dry ingredients. The mortar is basically a grinding stone with three short legs, with a top that is relatively flat, rough, and slanted. There are two shorter feet in the front, and a higher foot... 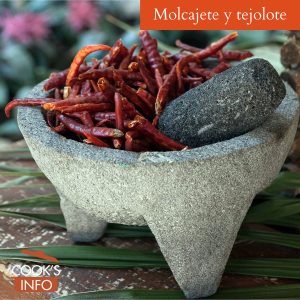 A molcajete is a bowl made of rough stone on three legs. It is actually quite large and will be able to hold about 1 litre (4 cups) capacity. It is accompanied by a tejolote, which is the pestle. 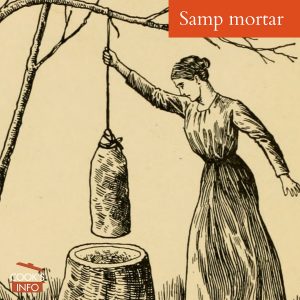 A samp mortar is a tool for grinding dried corn. The mortar was made from the stump of a tree burned hollow, scraped clean and polished. 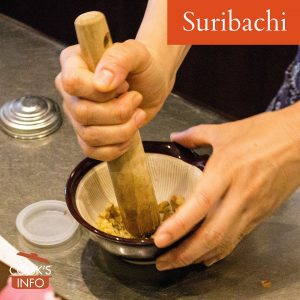 A suribachi is a Japanese mortar. Inside the bowl, it has ridges to help grind food item more easily and evenly. The pestles are made of wood, so as to not wear down the ridges over time. 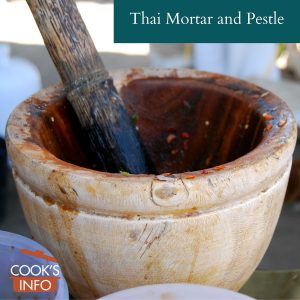 A Thai Mortar and Pestle is used to grind foods into a powder, and for making sauces. It will typically be made of either granite, or clay. Note though that Thais refer to it the other way round: as Pestle and Mortar! 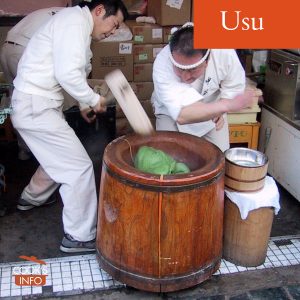 Usu are large Japanese mortars about the size of a medium barrel used to pound cooked sticky rice in preparation for making mochi.

This web site generates income from affiliated links and ads at no cost to you to fund continued research · Information on this site is Copyright © 2022· Feel free to cite correctly, but copying whole pages for your website is content theft and will be DCMA'd.
Tagged With: Mills, Mortar and Pestle