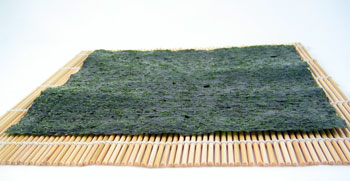 Nori is the generic Japanese word for seaweed used as a food item. There are actually several different kinds of seaweed that can be used, and the Japanese do indeed distinguish between them, as well as distinguishing based on any processing methods applied to the seaweed.

Nori was first harvested from the wild. By the 1600s, the Japanese were cultivating it. Success was sporadic, however, with some years producing a good crop, and some years practically none at all. Farmers didn’t understand what they needed to do to make their Nori crops consistent, until a researcher halfway across the world in Wales, a Dr Katherine Drew, discovered in the late 1940s how it reproduced.

Seaweed reproduces by releasing spores that make a shelter for themselves by burrowing into sea shells, and remain there until they have developed enough to release and attach themselves somewhere else and begin actually growing. It was the lack of shelter for the spores that was causing the seaweed “crop” failures. Now, in order to have abundant, reliable crops of Nori, nets of egg shells are provided in the water for the spores, which take to the egg shells as happily as they did sea shells.

The Japanese began applying this technique in the 1950s, and crop yields increased 10 times.

Most Nori is very dark green, and is dried and sold whole in folded sheets. To make the sheets, raw Nori is chopped and then pressed between bamboo mats. Good quality Nori should melt in your mouth with very little chewing required.

Nori is harvested during the winter.

Heat brings out the taste.

Store in a tightly sealed container.

This web site generates income from affiliated links and ads at no cost to you to fund continued research · Information on this site is Copyright © 2023· Feel free to cite correctly, but copying whole pages for your website is content theft and will be DCMA'd.
Tagged With: Japanese, Japanese Food, Nori, Seaweed