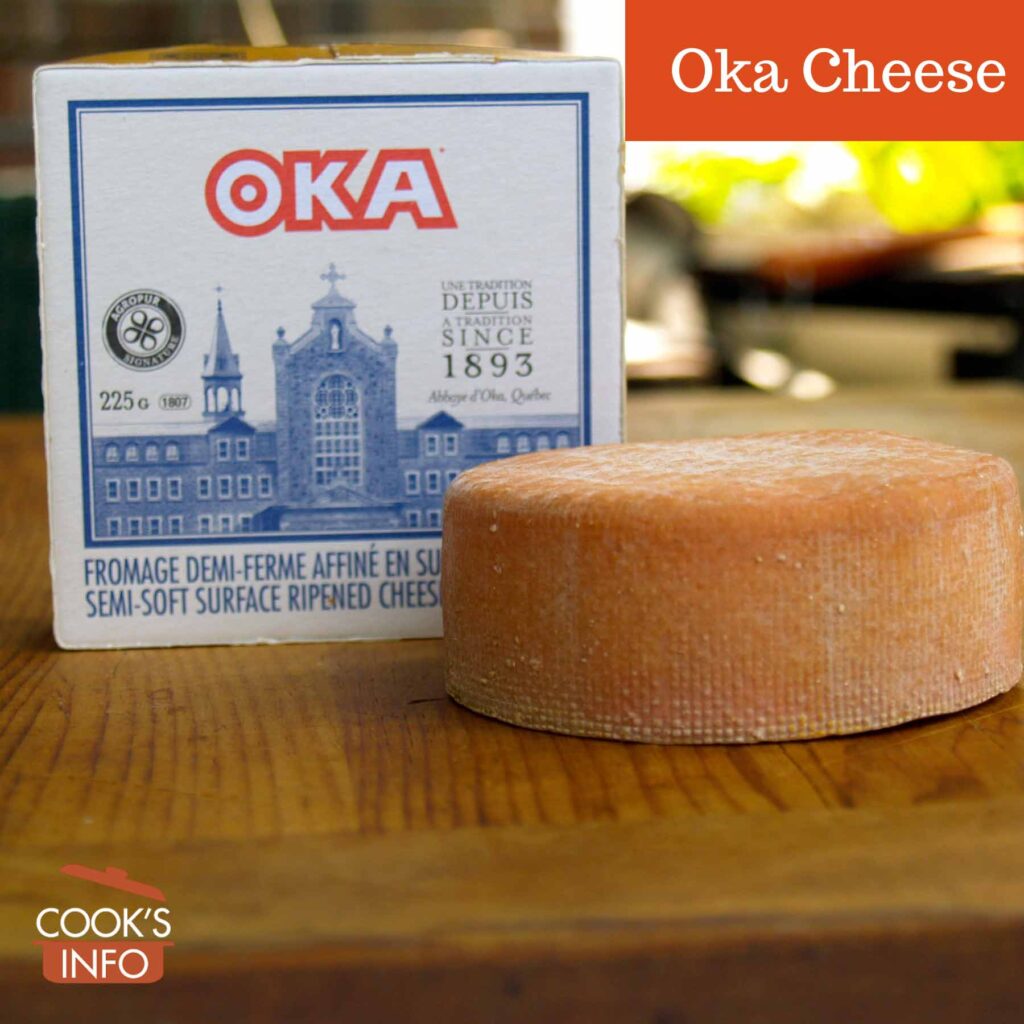 Oka, a Port-du-Salut style cheese, is a semi-firm cheese with a rind and a strong aroma. The rind can be anywhere from straw yellow to orangey-red. Inside, the cheese is a pale yellow. It comes in large rounds that weigh about 2.6 kg (5 pounds) or small ones of about 225g (8 oz).

It is named after a village south-west of Montreal, on the north shore of the Lake of Two Mountains in Québec, Canada.

It is made from either raw milk or pasteurized cow’s milk.

There are two versions: the regular is aged for 30 days, the classic is aged for 60 days. Both are ripened on slats of Cypress from the Carolinas in the United States. 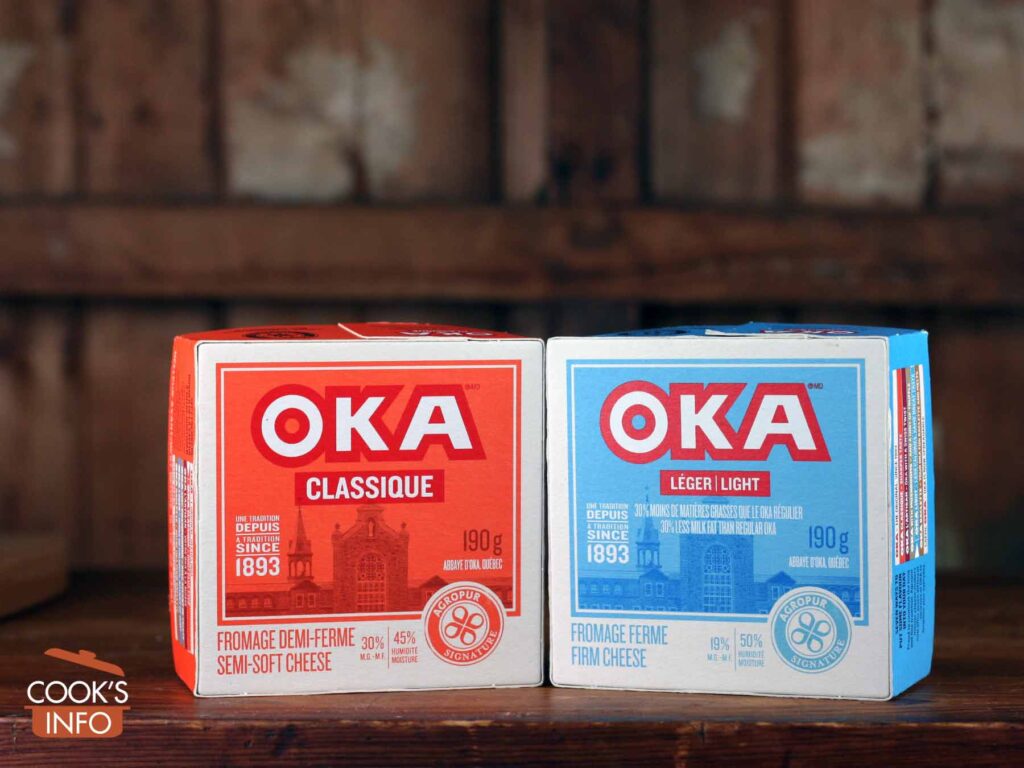 Wrap in tin foil, then in plastic in a sealable bag. Store in fridge for anywhere from 1 to 4 weeks.

Cut off any whitish mould that forms.

A monastery was established at Oka by Trappist monks in the summer of 1881.

The Trappists — five of them at first — were “refugees” from France. Their former monastery, Abbaye de Bellefontaine in Bégrolles-en-Mauges, Maine-et-Loire, France had been seized by the French state in 1880 and the monks ordered to leave France.

Every Trappist Abbey had to be able to support itself. They didn’t have to be hyper self-sufficient, as in eating only what they produced: they could buy stuff from outside sources, but they had to earn the money to do so with.

Though a monk named Alphonse Juin (1842 to 1910) is credited with the “invention” of Oka cheese, he didn’t really invent it: the Trappists sent the formula out to all their Abbeys to help them earn their living.

Juin was trained in making Port du Salut cheese; he had been making the cheese at the Port du Salut Abbey in France for 19 years. He was sent first to an Abbey in the United States, Our Lady of Gethsemani in Trappist, Kentucky, where he taught them how to make Trappist cheese, which they did for many years before discontinuing production in 2015. [1] “The monks of Gethsemani began making and selling a single hand-made cheese in the 1940s [Ed: Juin had actually trained them at the start of the 1900s]. After over sixty years of making cheese, Gethsemani Farms has opted discontinue its production. A number of factors led to this decision. We regret having to make this choice but feel it is in the best interests of our monastic life.” — Gethsemani Farms. Frequently Asked Questions. Accessed April 2022 at https://www.gethsemanifarms.org/FAQ.aspx   Juin arrived at Oka in February 1893 to teach the monks there as well.

During the Second World War, all of Oka’s cheese production was requisitioned by the Canadian army. [2]CBC News. Monks earning top ranking for their cheese. 23 July 2000. Retrieved August 2010 from http://www.cbc.ca/news/story/2000/07/23/bluechse000723.html (This left the door open for another cheese to enter the consumer market, which the Benedictine monks took advantage of: see Ermite Cheese.)

The monks made the cheese until about 1974. At that point, they licensed the name of the cheese and the rights to make it on their behalf to a dairy conglomerate that is now called Agropur.

Agropur’s “classic” version, aged for 60 days, is not aged as long as the monks had aged it. The factory, though, was established next to the monastery so that the monks could still check in on their cheese. Given that more than one other Trappist monastery has given up their cheese production as they were unable to keep up with the demand, the commercial licencing deal may have saved Oka cheese. 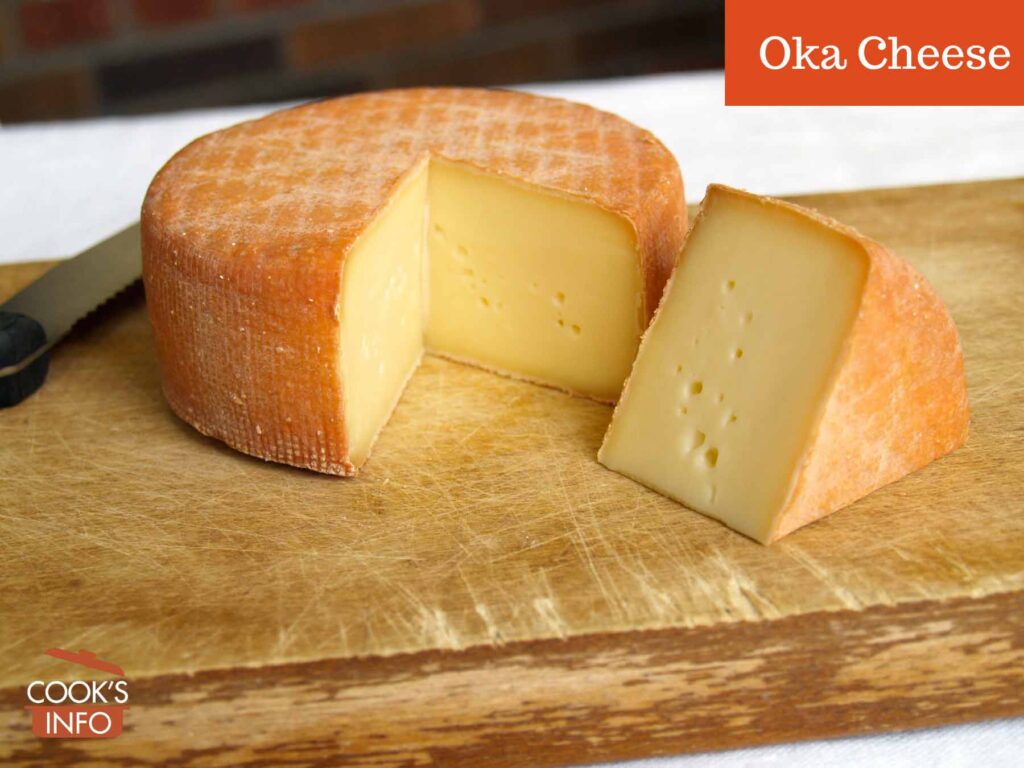 This web site generates income from affiliated links and ads at no cost to you to fund continued research · Information on this site is Copyright © 2022· Feel free to cite correctly, but copying whole pages for your website is content theft and will be DCMA'd.
Tagged With: Québécois Cheeses