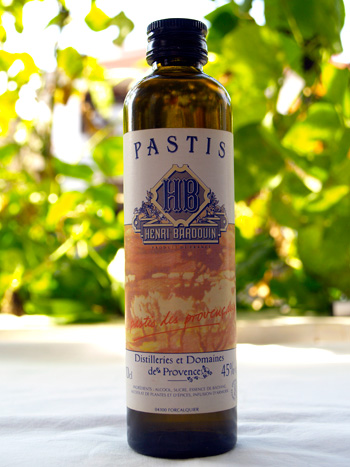 Pastis is a generic name for a type of anise-flavoured liqueur made in France. Though it is drunk throughout France, the strongest association is with area of Provence.

It is generally quite sweet, though a few brands are unsweetened so you can sweeten them yourself.

There are brands such as Boyer, Granier, Pastis 51 and Pernod-Ricard, which will be 40-45% alcohol by volume. There are also a few alcohol-free varieties such as Blancart and Pacifico.

The anise flavouring can come from star anise, anise, liquorice, etc. Other ingredients include alcohol, anethol, water, and herbs. Recipes vary by maker.

Pastis is usually diluted with water to drink, with or without ice cubes. Some feel that ice cubes can crystallize the anethol in the drink, so they add ice after the water. Some purists refuse any ice at all.

When water is added, most brands of Pastis turn a milky yellow. The anethol precipates in cold water, which causes the milkiness (anethol is barely soluble in water.) In French, you say that “l’anéthol paillette.” If you were to wait a few hours, the precipitation would disappear. The yellowish colour is owing to a colouring in it, often caramel. Note though that there are Pastis brands that stay white, and even others such as Janot that are blue.

Some typical styles of serving Pastis:

“Pastis au mètre” is a Pastis drinking game that evolved in the 1920s. It’s straight-up Pastis, in small glasses (called “mominettes”), lined up in a distance of 1 metre in total on the bar counter. You drink your way through them in succession. A bar in Toulouse, France, called “Chez TonTon” puts 17 glasses in its metre. (2009 prices: 27 €.)

“Le métre de pastis” is a play by Pascal Tourain named after this bar sport.

Pastis is also used in cocktails such as the cornichon, feuille morte, fréjus, mauresque, mazout, peroquet and the tomate. 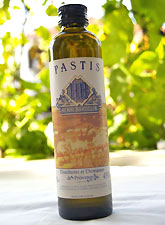 Anise-flavoured drinks are made all around the Mediterranean.

Pernod-Fils started making a Pastis in Tarragona, Spain in 1915, when Absinthe was banned in France (along with indeed all anise-flavoured liqueurs), though anise flavoured liquers continued to be sold under the counter. For theirs, they redid the absinthe recipe without the wormwood which was the basis of the ban on Absinthe.

Ricard started selling his Pastis in 1932 when he was 23 years old. His father was a wine merchant in the Sainte-Marthe area of Marseille. Ricard had been experimenting with Pastis before this. He based his on a mixture of star anise, green anise, and liquorice.

The two rival companies merged in 1975 to form Pernod-Ricard.

The production of Pastis was banned by the Germans when they occupied France.

This web site generates income from affiliated links and ads at no cost to you to fund continued research · Information on this site is Copyright © 2022· Feel free to cite correctly, but copying whole pages for your website is content theft and will be DCMA'd.
Tagged With: Anise Liqueurs, French Food