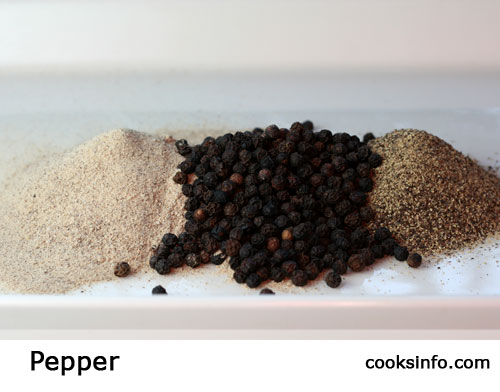 Pepper is a spice grows on a vine that grows anywhere from 12 to 20 feet (3.5 to 6 metres.) It has a woody stem, and produces white flowers which in turn produce peppercorns as fruit. Peppercorns start off green, and when ripe, turn red. Different colours of peppercorns and pepper result from harvesting these berries at different times and processing them in different ways. The most popular forms of pepper are black and white; red and green are also available.

Black pepper is the strongest-tasting form of processed peppercorns. To make black peppercorns, the peppercorn berries are gathered while still green, and allowed to dry and ferment. The fungus that causes the fermentation turns them black and gives them a strong taste.

When a recipe calls for pepper with no additional specification, black ground pepper is meant. Black pepper is currently the favourite, though white was the favourite up until the second half of the 1900s. Still, white pepper is used by more professional chefs than is black pepper.

Peppercorns often are in transit for 6 weeks before they even reach our stores: some people say that you can only truly enjoy fresh pepper on location in places such as India and Malabar, and that the aroma of those that reach us has lost a good deal of its complexity. Still, freshly-ground pepper is good as a “finishing pepper” for last-minute use at the table, as it also provides a coarseness of texture to the top of food.

Pepper is such a popular spice because it seems to enhance other flavours and not mask them.

Half the world’s pepper (2004) comes from India. As of 2007, pepper alone is one-quarter of the world’s spice consumption.

If you are looking for pepper the vegetable, as in chiles, or red peppers, see entry on peppers.

Pepper actually goes nicely with fruit. Freshly ground black pepper on strawberries really draws out their taste; and black peppercorns in stewed apples or pears cuts through all the sweetness, giving a real zing. This combination of pepper with sweet was used by the Romans and in Medieval cooking.

The pepper vine is native to India.

Pepper was used by both the Greek and Roman upper classes. It was such an expensive spice all through history, that in the 5th century the Romans managed to buy off the first round of barbarian hordes at their gates with 3,000 pounds of Pepper. The Romans liked to eat Pepper with fruit. They preferred, however, Long Pepper to Pepper: Pepper was 1/3 the price of Long Pepper in Rome. And, they preferred white pepper to black pepper.

The Guild of Pepperers was founded in 1179 in London. In 1429, they started efforts to restore the purity of Pepper: some unscrupulous merchants had been adulterating it with twigs.

We owe the confusion over the word Pepper to the Spanish. You’ll remember that at the time they discovered the New World, they were actually looking for a trade route to the East that would allow them to bypass all kinds of middlemen to get spices at a better price.

One of the most expensive and desirable spices was Pepper. They didn’t find any Pepper plants growing in Central America, but they found chiles, whose taste was hot and spicy like Pepper, so they called them Peppers — both because of the pungent taste, and because Pepper was a sexy name that would boost up the value of their discovery.

This web site generates income from affiliated links and ads at no cost to you to fund continued research · Information on this site is Copyright © 2021· Feel free to cite correctly, but copying whole pages for your website is content theft and will be DCMA'd.
Tagged With: Ancient Greece, Medieval Food, Roman Food