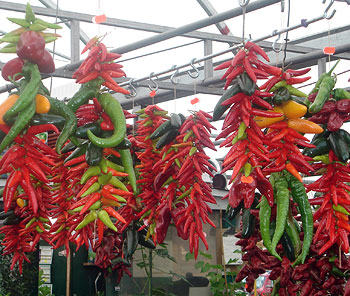 Peppers the vegetable are not related to pepper the spice in any way, shape or form. If you are looking for info on pepper the spice, meaning black pepper or ground pepper, see the entry on pepper.

Peppers are part of the deadly nightshade family that includes petunias, eggplants, potatoes, tomatoes and tobacco — and nightshade. Peppers are actually a fruit that we treat as a vegetable. Peppers will not ripen any further after they are picked; they must be left on the vines until ready.

Generally, peppers that don’t have any or much fire to them are called “sweet peppers“; while the hot ones are called “chile peppers” or “hot peppers.”

Don’t count on the colour of a pepper as a sign of how hot it will be. Red looks more exciting, but a green jalapeno is hotter than a red bell pepper. And small peppers are usually hotter than large ones, because the substance that makes them hot is more concentrated. Most peppers will also become hotter the more they ripen (sweet peppers are the exception: they become sweeter.)

If you are buying fresh peppers, pick out ones with no bruises, and that feel crisp and firm. Peppers in North America are often waxed before shipping to help them travel better.

If you’re buying dried peppers, avoid broken ones: they should still be a little supple. If they’re so brittle that they’re shattering, then maybe that label Aztec on the package isn’t just a brand name.

Peppers grow well in container gardening, but they require lots of day-long sun to come to fruition before fall sets in.

Wash fresh peppers before starting, then cut up as needed for what you are making. Discard stems, and seeds if desired.

If you are going to be stuffing a pepper, cut around the top at the stem end, then pull the stem out. Reach inside with a paring knife, and cut the seed core out and discard; you can rinse it out with water if you want to get rid of any loose seeds knocking about inside.

A quick way to loosen the skins on peppers is to blanch them in some boiling water. But only use this method if they are next going to be cooked in something. Otherwise, you need to roast them. See separate entry on Roasted Peppers.

Once you have cut into a pepper, wrap it in plastic wrap before putting the remainder back in the fridge.

You don’t have to blanch any peppers before freezing. Wash, cut, remove and discard the seeds (so they are ready to go when you need them), and toss into freezer bags or containers. Use for cooking (i.e. don’t try to serve them as fresh when you thaw them.)

“Peppers lose their crispness when frozen and thawed. Frozen peppers are useful in cooked dishes where texture is not important but the pepper’s flavor is desirable. Unlike most vegetables, they do not require blanching before freezing. Peppers can be sliced or diced, quick frozen on a cookie sheet, and packed into moisture- and vapor-proof containers.” [1]Harris, Linda J. Peppers: Safe Methods to store, Preserve and Enjoy. University of California. Division of Agriculture and Natural Resources. Publication 8004. 1998. Page 1.

It is estimated that peppers have been eaten since about 7,000 BC.

Columbus found chile peppers on his first trip in 1492. The natives were using them and introduced Columbus and his men to them. Because they were piquant, like black pepper, they got called peppers.

When you encounter just “peppers” in a recipe, you just have to use common sense as to whether a sweet pepper or a chile pepper is meant, unless you want to see those old folks hopping around the dining hall.

1) Capsicum annuum
Includes most common peppers such as jalapenos and bell peppers. The plants tend to mostly bear white blooms, though some can be violet; the fruit develops hanging down.

2) Capsicum baccatum
The plants produce white blooms with brown, orange or yellow marks on them, and from the blooms grow very small chiles about the size of berries. Its small chiles are common in South America, but not known yet outside of there. Varieties include ají angelo, ají cuencano, ají picante, criolla sella, lemon drop, and peri peri.

3) Capsicum chinense
Theese plants produce blooms that are white to pale green. They produce the very hottest grouping of peppers, including Scotch bonnet and habaneros. This group is badly misnamed. A Dutch botanist named Nikolaus von Jacquin had been in the West Indies for five years, 1754-59, gathering specimens, which he then took back to Europe to study. He seems to have gotten confused about what specimens came from where, because when naming it “chinense” in 1776, he wrote, “I have taken the plant’s name from its homeland.”

5) Capsicum pubescens
This is a mildly hot grouping, including caballo (horse), jutiapa, llata, manzano (apple), peron (pear), and rocoto peppers. Unlike other peppers, this group can’t cross-breed with peppers from the other groups, and its seeds are brown or black, instead of white. The blooms of the plant are violet. These are very hardy peppers; from their natural habitat in the Andes they have learned to stand temperatures down to -5 C (23 F.)

This web site generates income from affiliated links and ads at no cost to you to fund continued research · Information on this site is Copyright © 2022· Feel free to cite correctly, but copying whole pages for your website is content theft and will be DCMA'd.
Tagged With: Peppers, Vegetables