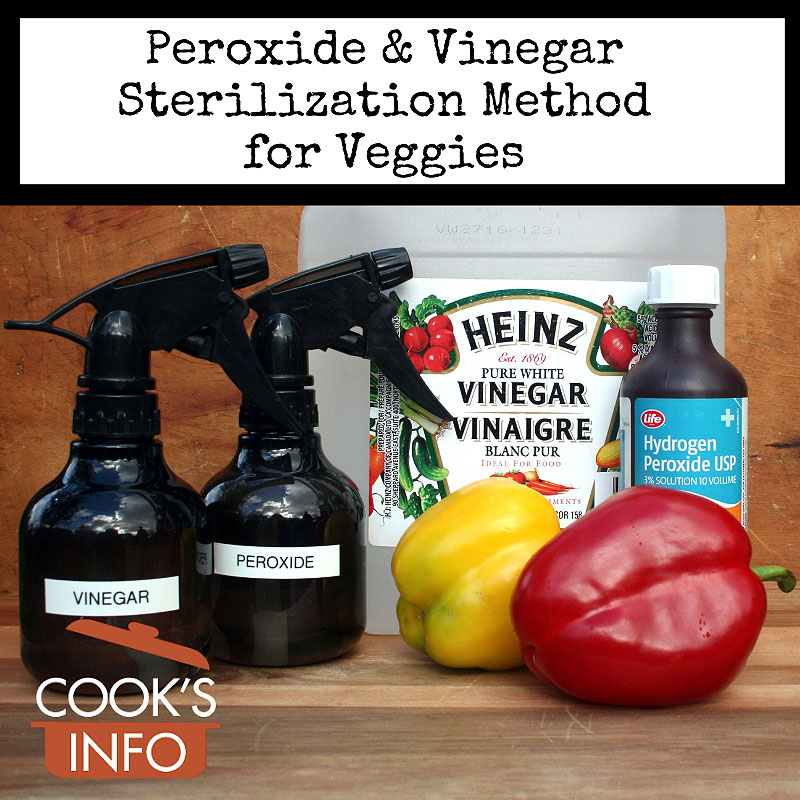 Peroxide & Vinegar Sterilization is proposed by an American university researcher, Dr Susan Sumner, as a simple, inexpensive but effective home method of sterilizing produce using everyday products in the home. It will kill almost all Salmonella, Shigella, and E. coli O157:H7 bacteria. You only need two spray bottles from a dollar store, white vinegar, and drug store hydrogen peroxide.

You work with two clean, opaque spray bottles [1]An opaque bottle is needed because hydrogen peroxide is sensitive to light, and therefore light can affect its strength. It’s fine to have the vinegar in a clear bottle.. In one, you put a solution of 3 % hydrogen peroxide, the same strength as you get from an ordinary drugstore for disinfecting wounds. In the other spray bottle, you put white vinegar (or apple cider vinegar.) Do not dilute either of them. It is recommended that you do not mix the two mixtures together in one bottle. It’s not as effective if you try to mix the two liquids in one sprayer and just do it all at once [2]If you mix the two together in one bottle, a weak form of peracetic acid is formed. Peracetic Acid ( aka peroxyacetic acid) is a mixture of acetic acid and hydrogen peroxide. Peracetic Acid is primarily used for deactivation of a large variety of pathogenic micro-organisms in the industrial food industry, medical supplies and to prevent biofilm formation in paper pulp industries. It is usually produced in concentrations of 5 – 15%. This industrial formulation is toxic by inhalation, ingestion or if absorbed through skin; caustic and corrosive at concentrations > 10%; irritant at concentrations below 2%. Retail vinegar is a mixture of acetic acid and water composed of 4 to 8% acetic acid. Hydrogen peroxide at 3 % and retail versions of vinegar are an extremely diluted form of peracetic acid. Mixing the diluted form of acetic acid (known as vinegar) with 3% hydrogen peroxide forms a weak form of peracetic acid that may cause some reaction to those who are very sensitive to it – another reason, besides effectiveness, that applying the two solutions separately is recommended..

First rinse the produce to remove any visible dirt. This method won’t sanitize dirt. Then, you spritz the item to be sterilized with one of the liquids, then with the other. Though it doesn’t matter whether you spray with the vinegar or the peroxide first, it is important that you apply the second mist right after the first one.

The peroxide taste is undetectable. A hint of the vinegar taste is still there, but that is fine for most food applications. But dealing with that taste even is easy, if you want: just rinse the produce after the spritzes.

The method can be used for uncooked vegetables destined to be used raw in salads, such as lettuce, tomatoes, peppers, etc, or being put out on dip or relish trays. It will also sanitize food preparation surfaces including wooden cutting boards and plastic, steel, and meat surfaces.

There is no need to sterilize produce which will be thoroughly cooked, as the heat temperatures will deal with any bacteria.

The method was developed by a Dr Susan Sumner in 1995 / 1996, while she was at the University of Nebraska Extension. She left for the Virginia Polytechnic Institute and State University in Blacksburg, Virginia in September 1996.

While at the University of Nebraska, she discovered that while vinegar and peroxide had abilities to sterilize, when used in conjunction with each other their strength was greatly magnified.

In later tests at the Virginia Polytechnic Institute and State University, she found the combination will kill almost all Salmonella, Shigella, and E. coli O157:H7 bacteria.

“Enteric pathogens on fresh produce have been implicated in numerous outbreaks of foodborne illness. The effectiveness of different wash treatments as controls of Shigella spp., Escherichia con 0157:H7 and salmonella spp. was tested. Lettuce and green pepper inoculated with Shigella and broccoli florets and cherry tomatoes inoculated with E. coli 0157:H7 were washed by dipping or spraying. Wash treatments included water, 2% or 5% acetic acid (AA), 20 μ/L monolaurin, or 3% hydrogen peroxide (H2O2) alone or in combination with 2% or 5% AA. Nisin with ethylenediaminetetraacetic acid was also used as a wash treatment. Produce samples were analyzed immediately and after 3 days storage at 12°C. Two wash treatments (2% AA + 3% H2O2 and 5% AA + 3% H2O2) were significantly (P < 0.05) different from the other wash treatments, with an average log reduction in bacterial numbers of 4.5, which eliminated the inoculum. Cantaloupe and honeydew melon inoculated with Salmonella were spray washed with 5% AA + 3% H202, or 2% AA + 3% H2O2, with water as a control. The average log reductions in bacterial numbers were 4 and 3.5 on smooth rinds, and 3 and 2 on rough rinds, respectively. Neither treatment eliminated the Salmonella from the rinds. The two wash treatments were significantly (P<0.05) more effective on the hon-eydew melon rinds.” — Peters, D., S.S. Sumner, et al. Control of pathogenic bacteria on fresh produce, a paper (abstract #168) presented in Seattle on July 2 at the 83rd annual meeting of International Association of Milk, Food and Environmental Sanitarians (since 1999: International Association for Food Protection). 1996.

This web site generates income from affiliated links and ads at no cost to you to fund continued research · Information on this site is Copyright © 2022· Feel free to cite correctly, but copying whole pages for your website is content theft and will be DCMA'd.
Tagged With: Cutting Boards, Salads, Sterilization, Vegetables, Vinegar