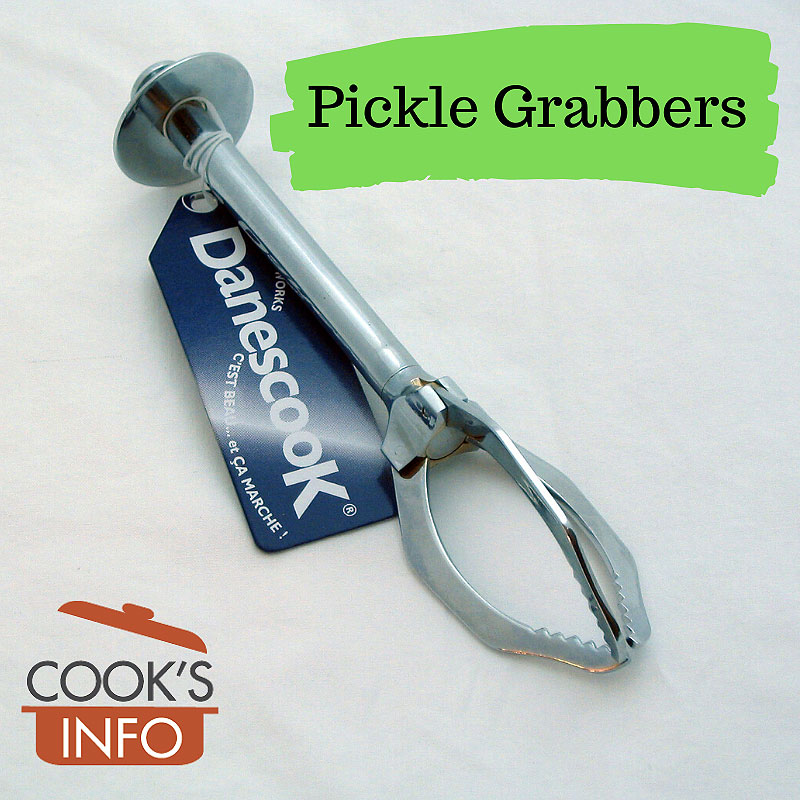 Pickle grabbers are tong-like devices meant for fishing pickles out of a jar. The pickled items they are generally intended for are small pickled cucumbers or cucumber chunks. The grabbing ends often look like a set of claws.

Some have a push handle at the end: you push it in to widen the grabber tongs, release it to tighten them again around the object you are grabbing, and then lift.

Some have the same handle spring action, but have fork tines that do the grabbing instead and then release the object when the handle is released.

Some can be quite weak, though, meant for nothing heavier than a slip of a gherkin or an olive, and can’t handle the weight of say, a dill pickle. Strong enough ones can be used for ice cubes.

Some are not long enough for tall jars.

A pickle grabber really needs to be made of stainless silver or plastic to stand up to repeated immersions in brine. Some have plastic handles, with the grabbers being metal.

The main complaint about pickle grabbers is how weak they are. Most people end up chucking them to the far back of a kitchen drawer, and using a fork instead. If the jar mouth is wide enough, an ordinary set of kitchen tongs is often is the best thing for fishing out heavier pickled items such as large pickles, pickled eggs, sliced or chunked pickles, etc.

For pickle, as in a relish such as Branston Pickle, a spoon.

This web site generates income from affiliated links and ads at no cost to you to fund continued research · Information on this site is Copyright © 2022· Feel free to cite correctly, but copying whole pages for your website is content theft and will be DCMA'd.
Tagged With: Kitchen Tongs