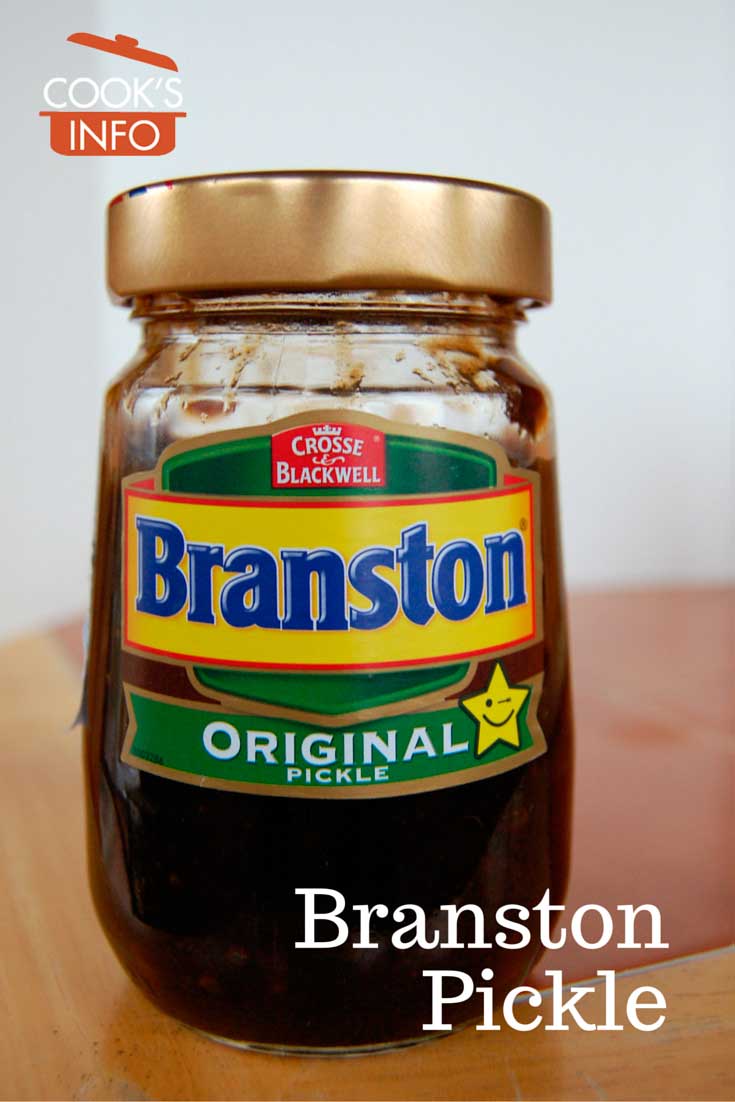 Branston Pickle is a relish of diced, crunchy mixed pickled vegetables in a thick, dark sauce.

The sauce part is dark brown, with a sweet and sour taste, about the thickness and texture of ketchup, or HP Sauce (aka brown sauce.)

It is more popular in the south of England than the north (in the north, piccalilli is preferred.) It is made by Crosse & Blackwell . There are also generic supermarket brands.

If a British writer refers to “sweet pickle”, there’s a good chance that they mean Branston Pickle.

What is Branston pickle

Branston Pickle is more like what North Americans might refer to as a chutney. In the UK, the word “pickle” or “sweet pickle” used by itself (as opposed describing something such as “pickled onion”) is often likely referring to Branston Pickle. It’s the “pickle” that is meant whenever you hear a Brit refer to a “cheese and pickle” sandwich.

North Americans look at it and think “brown sludge”, in the same way that Brits look at North American neon green hot-dog relish and think “nothing without formaldehyde is ever that colour.”

Vegetables in the mixture include carrots, cauliflower, gherkins, marrows, onion, rutabaga and tomatoes. They are diced to about 1 cm (½ inch) square.

It’s interesting to note that Branston has chosen, since the beginning, to list the ingredient “rutabaga” as “rutabaga”, which is the North American equivalent for what Brits actually call “swede.”

Several other brands, such as Norfolk Manor Country, Marks & Spencer and Heinz sell the pickle under the generic name of “Ploughman’s Pickle.” There are also several supermarket own-brand versions calling it things such as “Sweet Pickle.”

There are also many homemade recipes for brown pickle, another name for it. 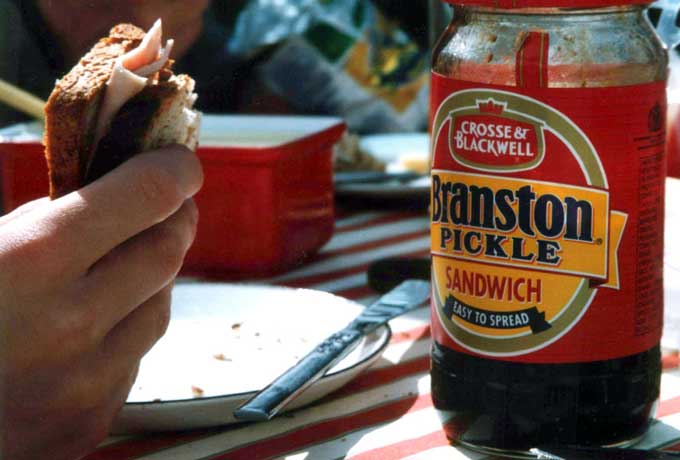 Branston Pickle is good with cold cuts and cheese, and is often served with a “Ploughman’s Lunch.” Some people even put it on their pizza. Many people like it on open-faced melted cheese sandwiches (aka cheese on toast.) 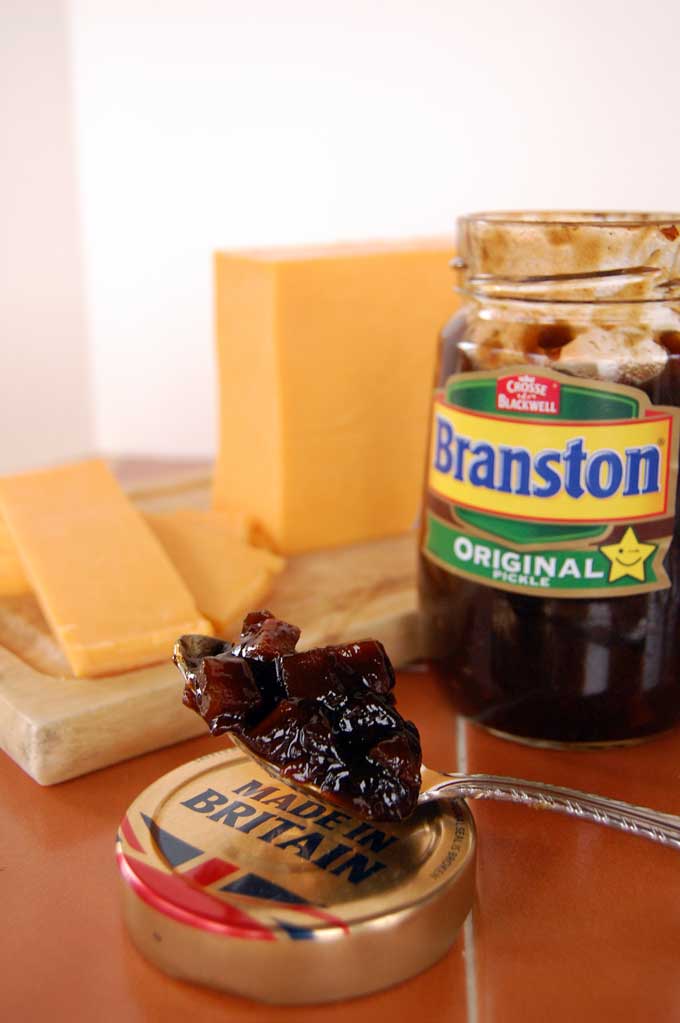 The recipe for Branston pickle reputedly originated with a Mrs Caroline Graham and her two daughters, Evelyn and Miss Ermentrude who lived in what was then the village of Branston, in a house called Branston Lodge in Burton Road. [1]”The name Branston was used becuase the recipe came from a Mrs Caroline Graham, who lived with her husband and daughters at Branston Lodge in Burton-upon-Trent in Staffordshire.” Newton, David. Trandmarked: A History of Well-known Brands. Stroud, Gloucestershire: The History Press. 2008. Chapter 4. [2] “Branston Pickle still contains the same 23 ingredients as when it was first formulated by Mrs Graham and her two daughters, Evelyn and Ermentrude, in their kitchen at Branstone Lodge, Branston village, Staffordshire, during the early 1900s. Evelyn was involved in biological research, which may explain why so many of those relatively exotic ingredients were to hand, including gherkins from India, dates from Iran and Pakistan, pearl onions from Holland, lemon juice from Sicily and rutabaga seeds from Canada. The recipe was bought by Edmund Crosse and Thomas Blackwell, who had established a food business in 1829.” Great British Brands. Branston. Marketing Magazine. Accessed March 2016. [3]”Burton Road Area: Residential development along Burton Road started in the late 19th-century with detached houses at the end near the borough boundary. The earliest were Branstone Lodge and the Elms, in existence by 1882; they were demolished in the earlier 1960s, when houses were built on their sites in Lonsdale Road.” — ‘Branston: Introduction’, in A History of the County of Stafford: Volume 9, Burton-Upon-Trent, ed. Nigel J Tringham (London, 2003), pp. 163-167. British History Online [accessed 18 March 2016].

In 1921, Crosse & Blackwell purchased the recipe from the Grahams. At the same time, in preparation for production, they purchased a large house in Branston called Branston Hall on Clays Lane, for use as a residence by single women who would be working at their factory. [4]”Branston Hall: A farmhouse at the southern end of Clays Lane owned by the Allen family in the later 18th century was replaced in the earlier 19th century by a house which by 1839 was called Branston Hall. (fn. 3b) It was bought by Crosse & Blackwell in 1921 as a hostel for single women employed at the company’s newly-opened factory on Burton Road. (fn. 4b) Later a private house again, it was demolished in the earlier 1960s and the Leamington Road private housing estate was built over the site. — ‘Branston: Introduction’, in A History of the County of Stafford: Volume 9, Burton-Upon-Trent, ed. Nigel J Tringham (London, 2003), pp. 163-167. British History Online [accessed 18 March 2016]. They also had a built an area that they called “Wayside”: a grouping of 30 Arts and Crafts style houses for other workers of theirs.

Commercial production started in 1922 in a large red-brick factory. The building had been completed early in 1918, intended to make machine guns for World War One, but the war ended before production really started. Crosse & Blackwell bought the building from the government in 1920.  [5]”Mr. HIGHAM asked the Prime Minister if he is aware that tenders were invited for the National Machine-gun 1689 Factory at Burton-on-Trent by the Disposals Board, and that that Board agreed to sell the property to the highest bidder; that tenders were opened at 12 noon on 29th April, and although one firm’s offer was one per cent. higher than the next bidder the property was disposed of to the lowest tender; in view of this fact, will he explain why this method of selling Government property is carried on; and will he consider the advisability of reopening the tenders in view of the Government’s need of money?….. An offer to purchase the factory at Burton-on-Trent for £550,000 was made by M. Girardot, who said he was prepared to employ 90 per cent. ex-service men if available, of whom not less than 15 per cent. were to be disabled men. This offer was not accepted. but a further offer was made by the Ministry to sell for £600,000, and this was declined on behalf of M. Girardot. Subsequently Messrs. Crosse and Blackwell entered into negotiations for the factory, and tenders were invited both from that firm and from M. Girardot. It was decided that the highest tender made by noon on 29th April should be accepted, subject to the Minister being satisfied that the purchasers were in a position to complete the purchase in accordance with the conditions of the tender. Representatives of both parties attended at the time fixed with sealed offers, both of which were opened in their presence. The tender made by Messrs. Crosse and Blackwell was £612,856; that made by M. Girardot was £576,000, or one per cent. in excess of any other tender, whichever was the highest. The Minister did not consider that this offer by M. Girardot was a proper tender, and he was, in fact, advised that legally it was 1690 not a tender at all, and should be disregarded by him. The Minister therefore accepted the tender of Messrs. Crosse and Blackwell.” — MACHINE-GUN FACTORY, BRANSTON. Hansard, UK Parliament. HC Deb 03 May 1920 vol 128 cc1688-90. 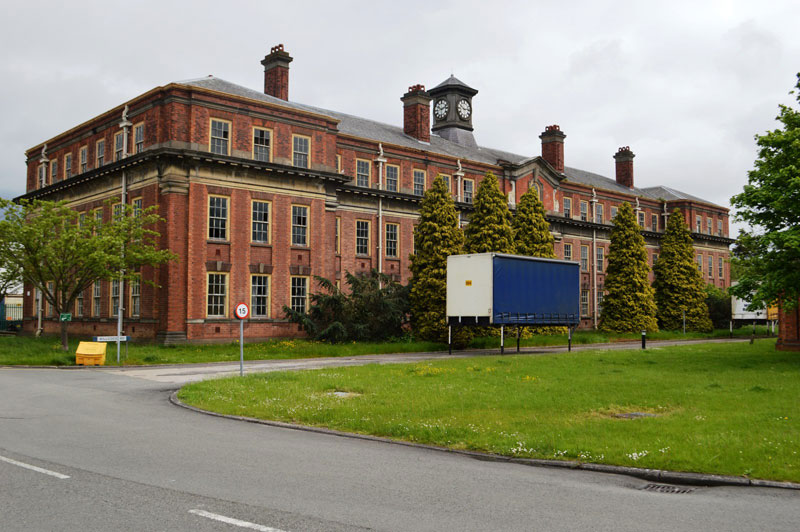 Zoe Lyons, author of the Exploring Southwark site, says the new factory in Burton-upon-Trent just wasn’t paying for itself:

In 1922 they began production of the renowned Branston Pickle at their new factory. However, the investment in this factory was a disaster economically and two years later they were counting the cost. They closed the factory and moved production to the E Lazenby & Sons’ site in Crimscott Street, Bermondsey. [6]Lyons, Zoe. Crosse and Blackwell / E Lazenby & Sons. Exploring Southwark Accessed March 2016.

Product was at first moved into a factory on Crimscott Street, Bermondsey in South London (close to the factory where Crosse & Blackwell made its own cans for its other products) and then later to the Docklands, then out of England and up to the Nestlé plant at Peterhead, Aberdeenshire, Scotland, then in 1998 back down to England to Hadfield, near Glossop, Derbyshire when Nestlé closed the Crosse & Blackwell plant in Peterhead.

Nestlé purchased the Crosse & Blackwell company in 1950. In May 2002, Branston Pickle, along with the complete Crosse & Blackwell line, was bought from Nestlé by Hicks Muse (a US company) to become part of their UK subsidiary, Premier Foods. In early 2004, they moved to Bury St Edmunds in Suffolk, a move that cost £3m. A subsequent fire in that new factory on Mildenhall Road in Bury St Edmunds (Suffolk) on 27 October 2004 led to fears of a shortage, causing panic buying.

The original building back in Branston is still standing. It is a red-brick brick building, with stone accents, with a high brick wall in front. By 1927, the building had been sold to the Branston Artificial Silk Co. Ltd, which remained there until 1930. From 1937, the building was home to a War Office ordnance depot. During the Second World War, Italian prisoners were housed in Nissen Huts (long, greenhouse-looking buildings of corrugated steel) behind the building. The War Office remained in the building until 1974. In 1976, the building was transferred to the Home Office prison service, which still controlled the building though it had partially vacated it as of 2002.

Crosse & Blackwell has changed the recipe and production method for the pickle many times over the years as they found ways to do so without changing the appearance or taste of the final product. [7]French, Michael and Jim Phillips. Cheated Not Poisoned?: Food Regulation in the United Kingdom, 1875-1938. Manchester: Manchester University Press, 2000. Page 28. 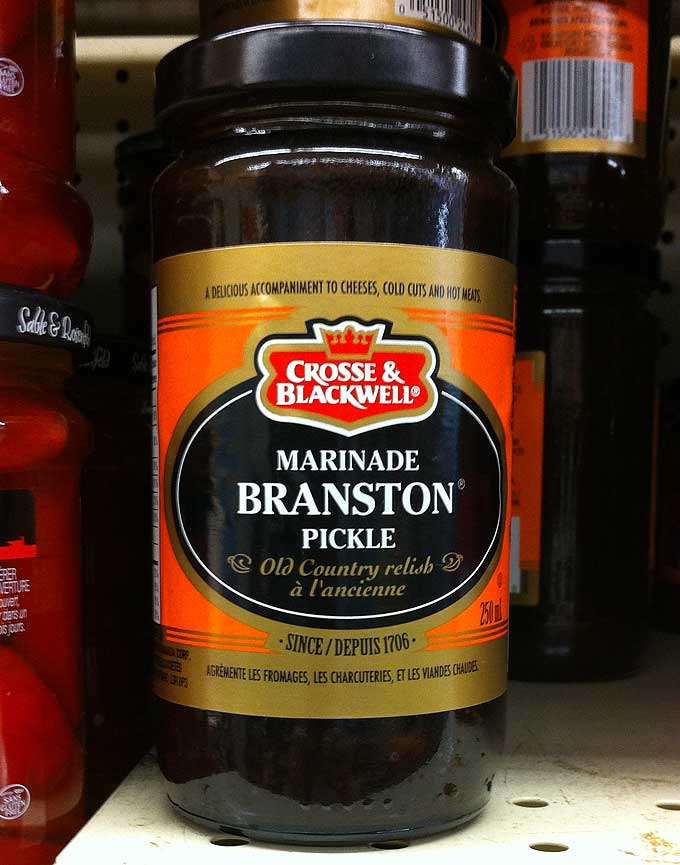 Branston pickle as bottled for sale in Canada. © CooksInfo

Note that the spelling is indeed Branston and not Brantston, though it had its origins in Brant: “The name Branston is Old English and means an estate belonging to a man called Brant, a personal name of Scandinavian origin.” [8]Branston: Introduction’, in A History of the County of Stafford: Volume 9, Burton-Upon-Trent, ed. Nigel J Tringham (London, 2003), pp. 163-167. British History Online [accessed 18 March 2016]