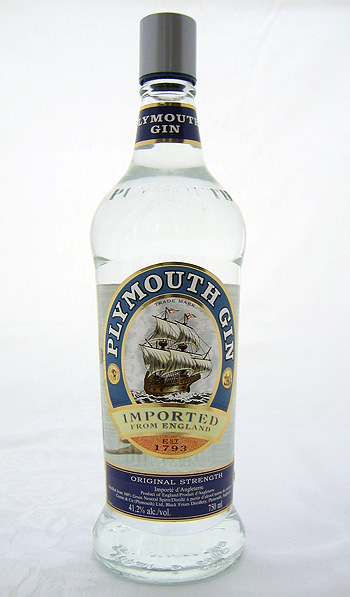 Traditionally, Plymouth Gin has been considered a gin category on its own, though to taste it you’d really think it another brand under the London Dry category.

It is triple-distilled and very aromatic. It has an earthier flavour, owing to an increased amount of angelica and orris root in it to balance the floral elements more. And it seems to work. Fans say it has the best balance of all gins. They might be right. When you’ve had a crisp Martini made with Plymouth Gin, it’s hard to say no to another one.

Regular strength Plymouth Gin is 41.2% proof; the Plymouth Gin Navy Strength is 57%. This was the strength required by the Royal Navy to pass its proof test (see Proof in the main entry on Alcohol) to make it safe to store on ships.

Plymouth Gin has EU PDO status, and by the requirements of its PDO designation, can only be made in Plymouth (Devon, England.)

Plymouth Gin was first made in 1793. It was the preferred brand of people as varied as Alfred Hitchcock, Franklin D. Roosevelt, Ian Fleming (creator of James’ Bond), and Winston Churchill.

In 1933, Plymouth won a lawsuit against Beefeater, when that company tried to make a brand of gin and sell it as “Plymouth Gin”. Ironically, by the mid-1900s, it was owned by the same company that owned Beefeater, and it was a neglected and dying gin.

In 1966, it was bought out and re-invigorated by another company. They relaunched Plymouth in 1998 in a new bottle, and restored its proof strength from a weakened 37.5% back to 41.2%.

This web site generates income from affiliated links and ads at no cost to you to fund continued research · Information on this site is Copyright © 2022· Feel free to cite correctly, but copying whole pages for your website is content theft and will be DCMA'd.
Tagged With: British Food, Protected Designation of Origin