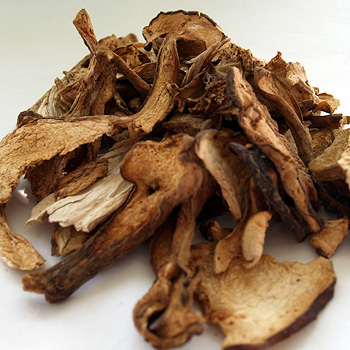 Porcini Mushrooms are pale brown with a meaty texture and a rich, woodsy flavour.

They don’t have gills underneath the cap; they have pores instead. The caps can be anywhere from 1 to 10 inches wide (2.5 to 25 cm.) They are still collected from the wild; efforts to cultivate them domestically have not yet succeeded (as of 2004.)

They are available fresh or dried, canned or frozen. When buying fresh ones, choose ones that are firm and plump.

Outside of Europe, they are usually only available dried, though they do grow in China and Mexico. Dried Porcini exported from China and South America is usually actually a mushroom that is a close relative, Slippery Jack.

Before cooking discard the stem, and scrape off the pores underneath as they become slimy and unpleasant when cooked.

Cook for at least 5 minutes

Don’t eat Porcini raw, as raw ones have in them a protein that is indigestible that can irritate people’s stomachs. They always need to be cooked. Cooking also develops the flavour.

They dry well for storage.

From the descriptions left by Pliny in his Natural History, it is very probable that what the Italians now call Porcini mushrooms are what the Romans called “fungi suilli”. Both words mean “pig mushrooms”, referring to the zeal with which wild and other pigs seek them out as food.

Called “ceps” in the UK.

This web site generates income from affiliated links and ads at no cost to you to fund continued research · Information on this site is Copyright © 2022· Feel free to cite correctly, but copying whole pages for your website is content theft and will be DCMA'd.
Tagged With: French Food, Italian Food, Roman Food