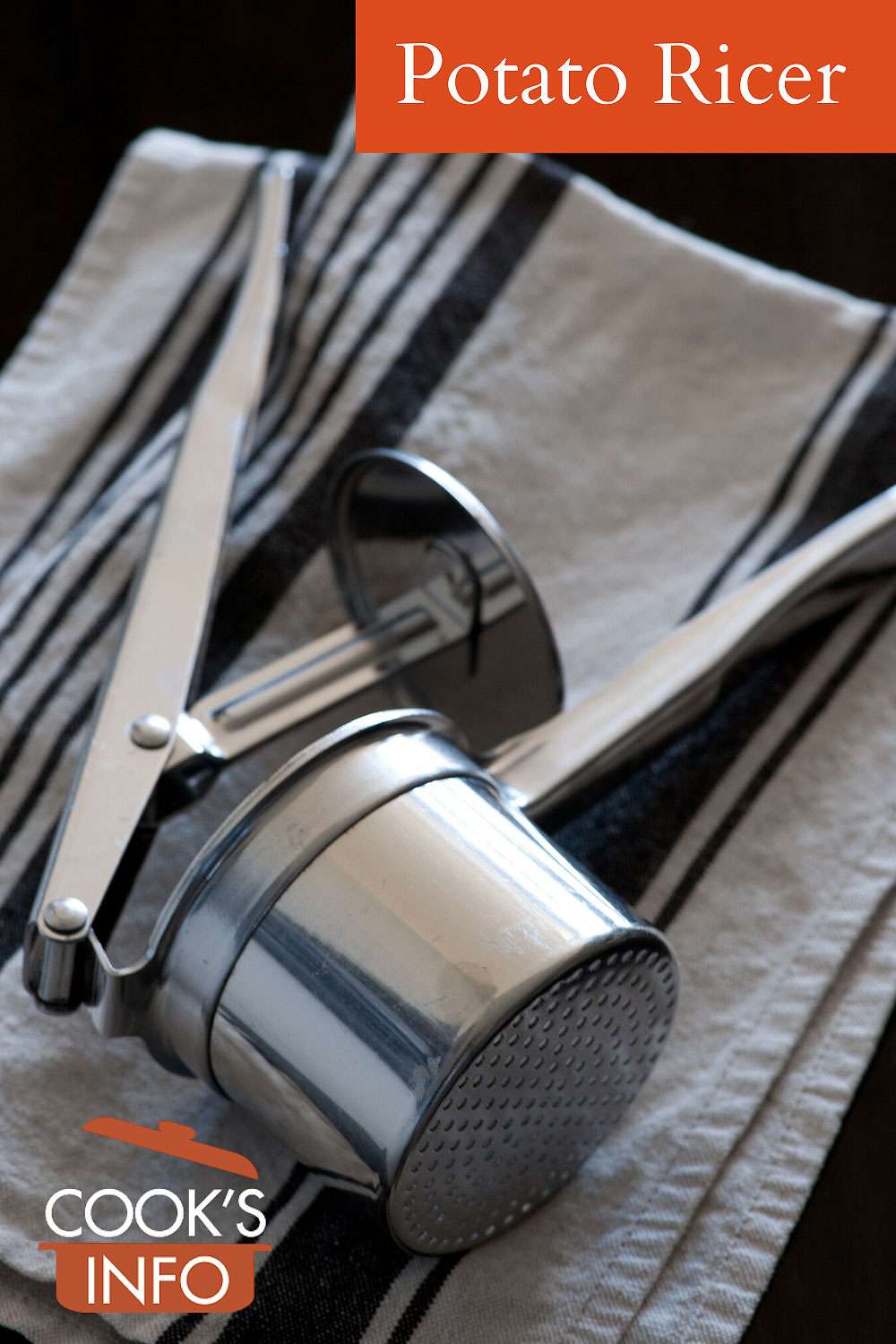 A potato ricer is a tool used to transform cooked potatoes into strands.

It is reminiscent of a giant garlic crusher. It has a basket on it, in which you put your cooked potato. Then, you close the other part of the ricer, which is like a plunger, down on it and squeeze the two handles together. The potato gets pressed, causing it to be extruded through the holes at the bottom in strands. The strands break into rice-like pieces.

It is a specialized version of a ricer.

The baskets are generally either round, about 7 to 10 cm (3 to 4 inches) wide, or rectangular with a V-shaped bottom, with the pressed item coming out through both sides of the V.

Most will do one potato at a time, though you can get ones with larger baskets.

Some models (particularly the round ones) may come with multiple disks that have different hole sizes, that you can swap in as needed. For instance, large-holed plates can be used to make spaetzle. Some of those models, though, have the problem that the disk becomes dislodged after each press, and it can be very fiddly and time-consuming having to reset the disk in place each time.

Potato ricers also come as solid, one-piece models — they look like the kind of potato masher that has holes in it, except with a bent handle.

Some have comfortable rubberized handles for you to hold them with; some are designed to straddle and rest across a bowl or pot, making it easier to press down. 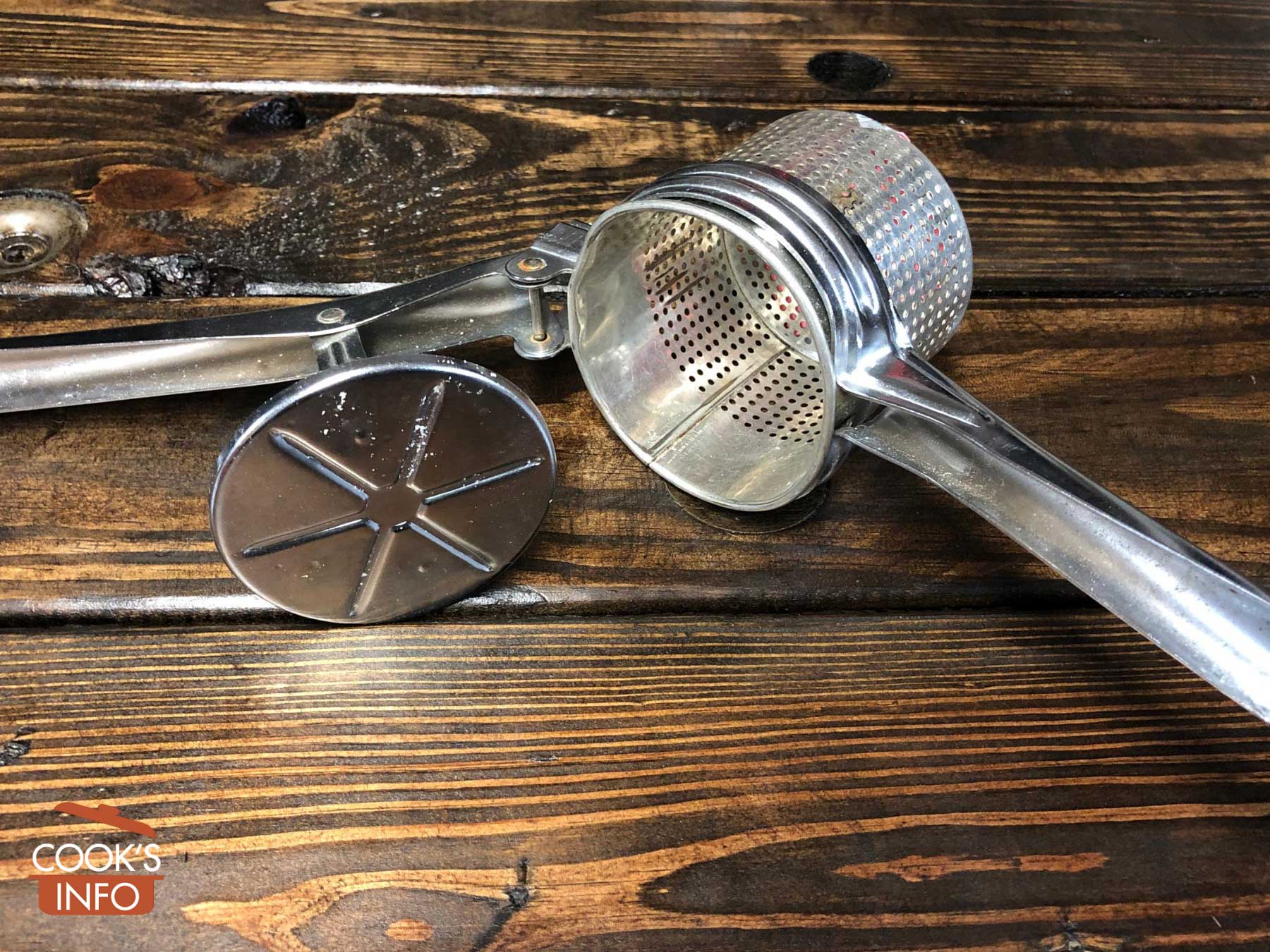 When purchasing a potato ricer, choose a hefty, sturdy model that can stand up to brute force. Some less-expensive metal ones, such as those made out of aluminum, tend to bend, and plastic ones can be just not sturdy enough in general.

Some potato ricers are not dishwasher safe, particularly models that are coated in tin. Dishwasher safe ones will usually be made out of stainless steel. It is best to soak potato ricers right away after use, because few things dry as hard as potato starch.

Make sure the tinned ones are completely dried before putting them away so that they don’t rust. 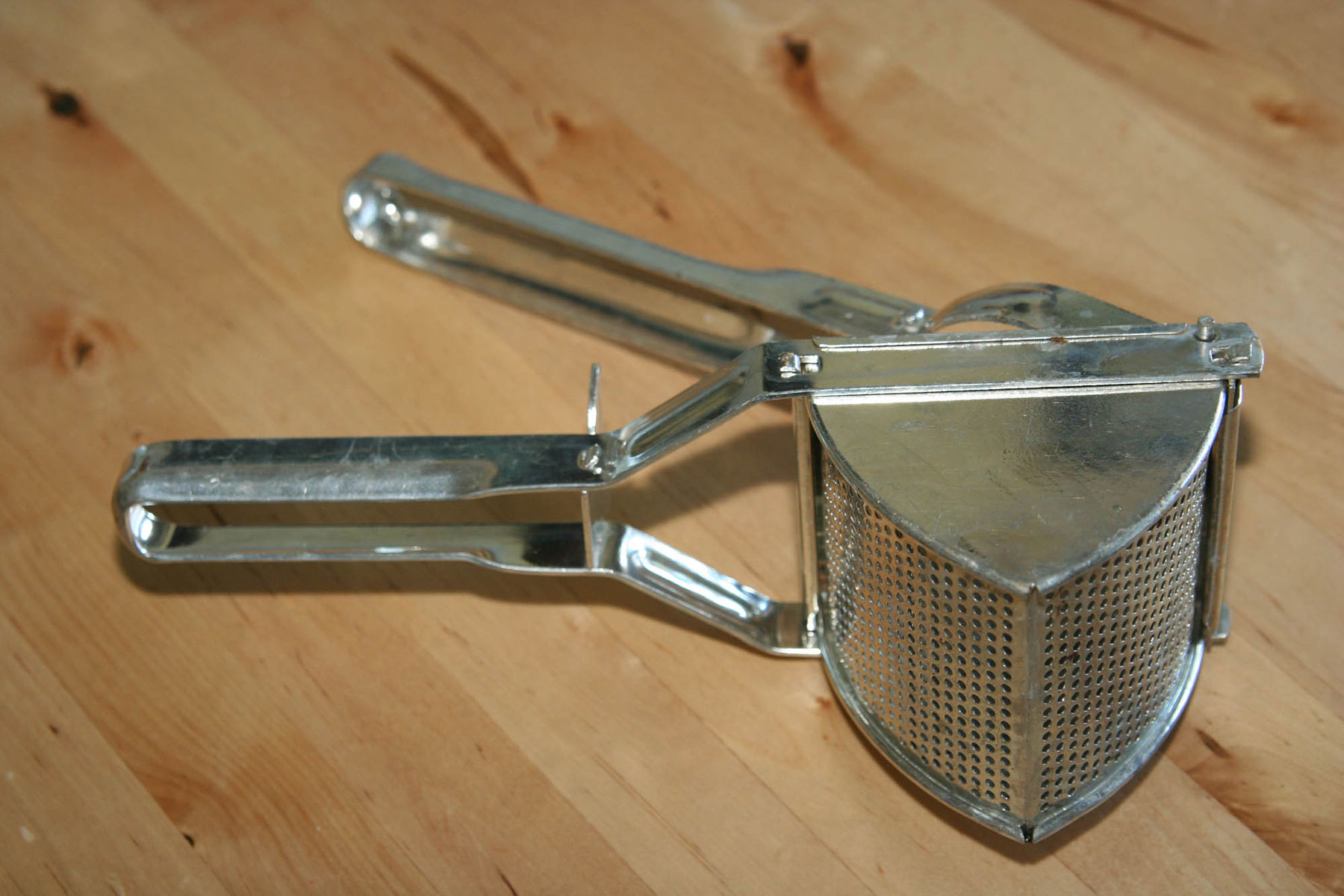 Many people swear by making mashed potato by pressing the potatoes through a potato ricer. You can boil potatoes unpeeled, and then press them through. The peel will get caught in the ricer and the potato will come through. After about three potatoes, though, you’ll need to open it and scrape away the trapped potato peel, and then continue. Not all models will work well with unpeeled potatoes. 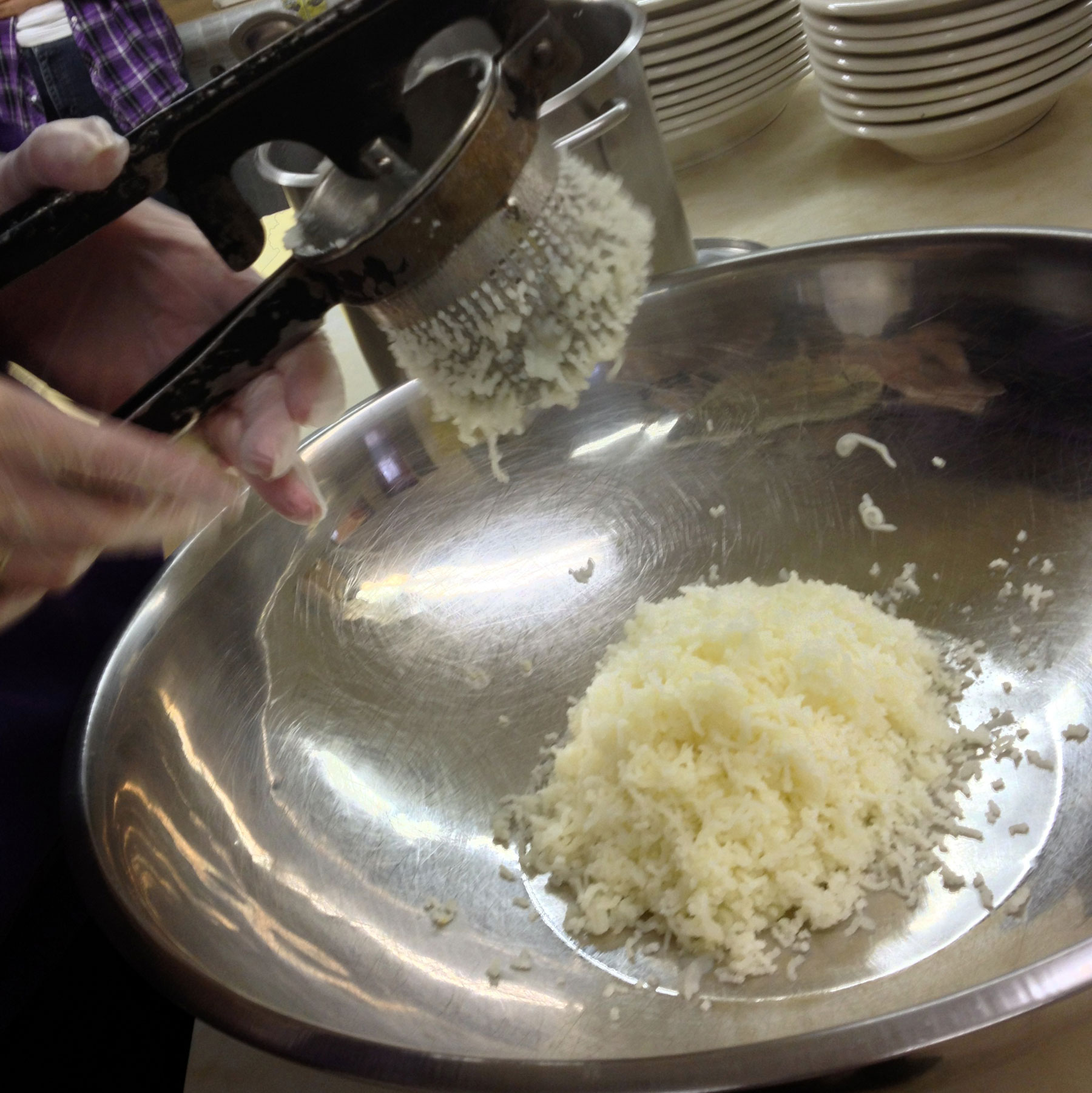 Fans say this makes very light, fully mashed potatoes because not as much of their starch gets released. It is certainly not as fast, though, for making a large quantity of mashed potato as a plain old potato masher would be — you can pretty much just about only do one potato at a time. And if you start off with the right potatoes for making mashed from, they should turn out light and fluffy anyway with a masher. Other people say that they don’t like the texture of mashed potato made with a ricer.

Mashed potato made this way will likely need reheating.

Other Uses for Potato Ricers

Instead of a ricer, you can put the food through a food mill. 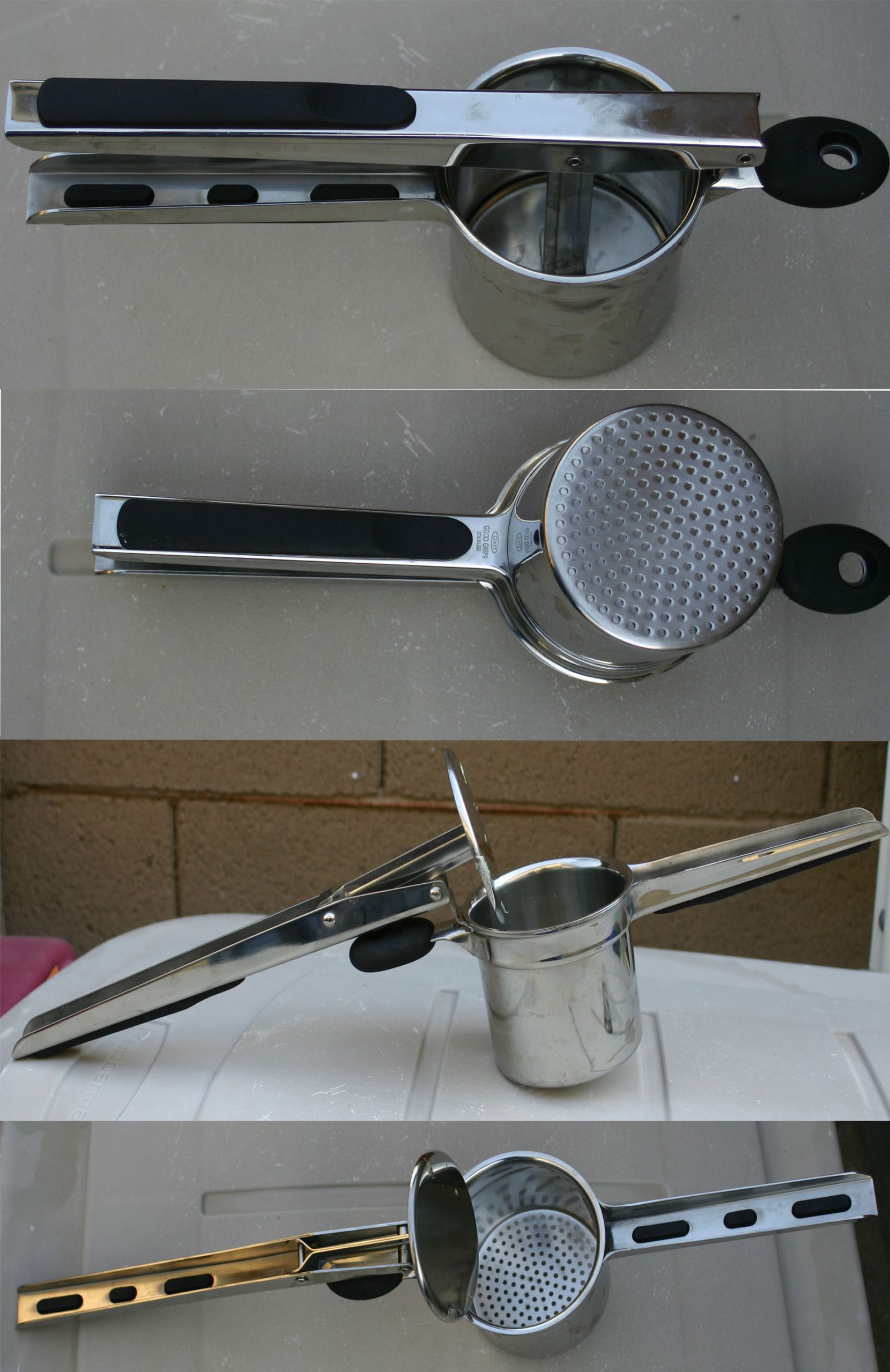 This web site generates income from affiliated links and ads at no cost to you to fund continued research · Information on this site is Copyright © 2023· Feel free to cite correctly, but copying whole pages for your website is content theft and will be DCMA'd.
Tagged With: Mills, Potatoes