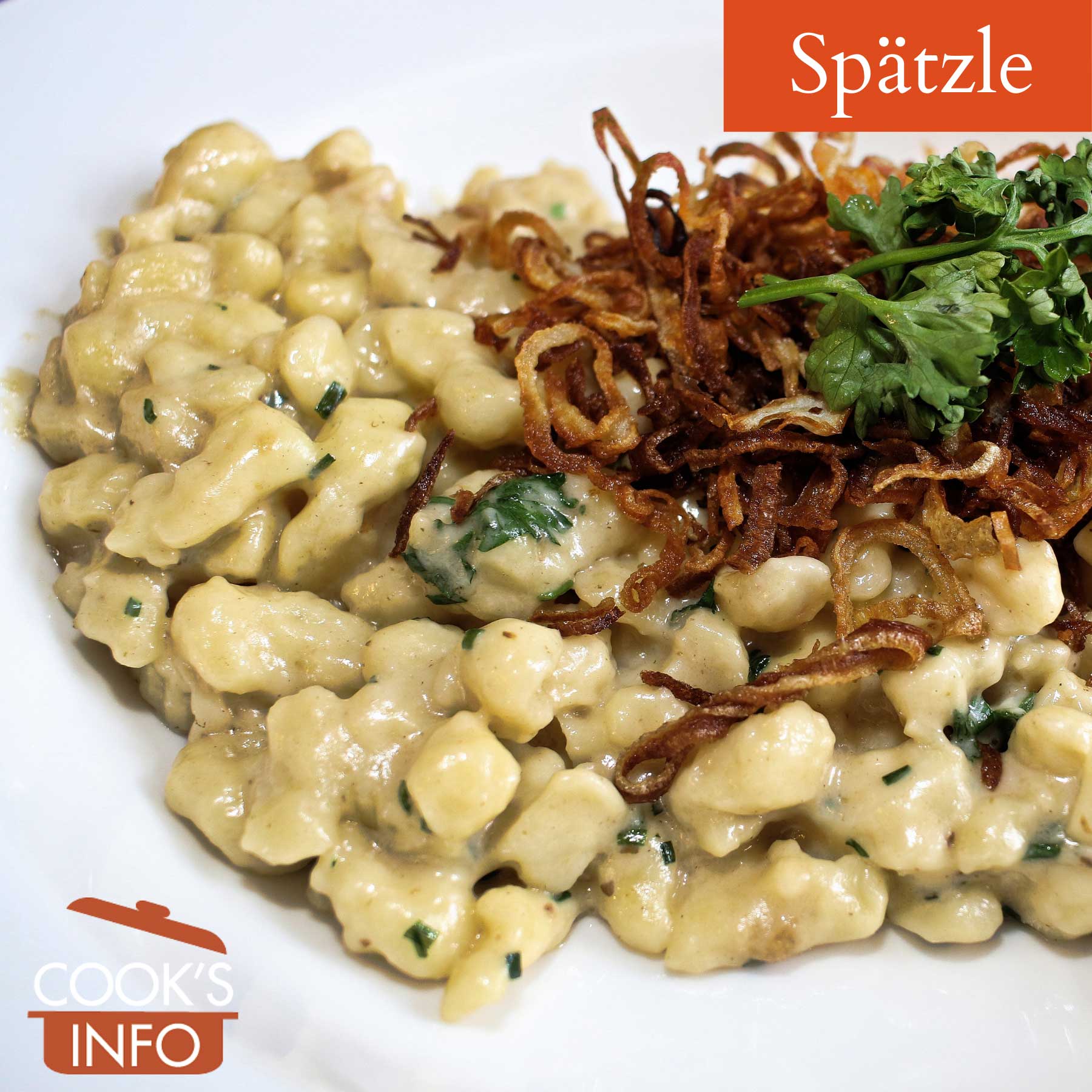 Spätzle are very small Central European egg noodles made from flour, eggs, salt and either water or milk as the liquid. They are occasionally seasoned with nutmeg.

You gather the dough into a firm ball. The small noodles can be formed from it in several ways including:

Depending on the technique used, the noodles may be short, or long.

The noodles are then boiled. They are done when they rise back up to the surface. Some prefer theirs cooked longer, though, saying that “until they float” is not long enough. Some argue for 3 to 5 minutes total cooking time; some argue for up to 15 minutes. They will be very soft when cooked.

You remove the Spätzle from the boiling water with a slotted spoon, if there’s another batch to go in, otherwise just drain it through a colander or sieve. 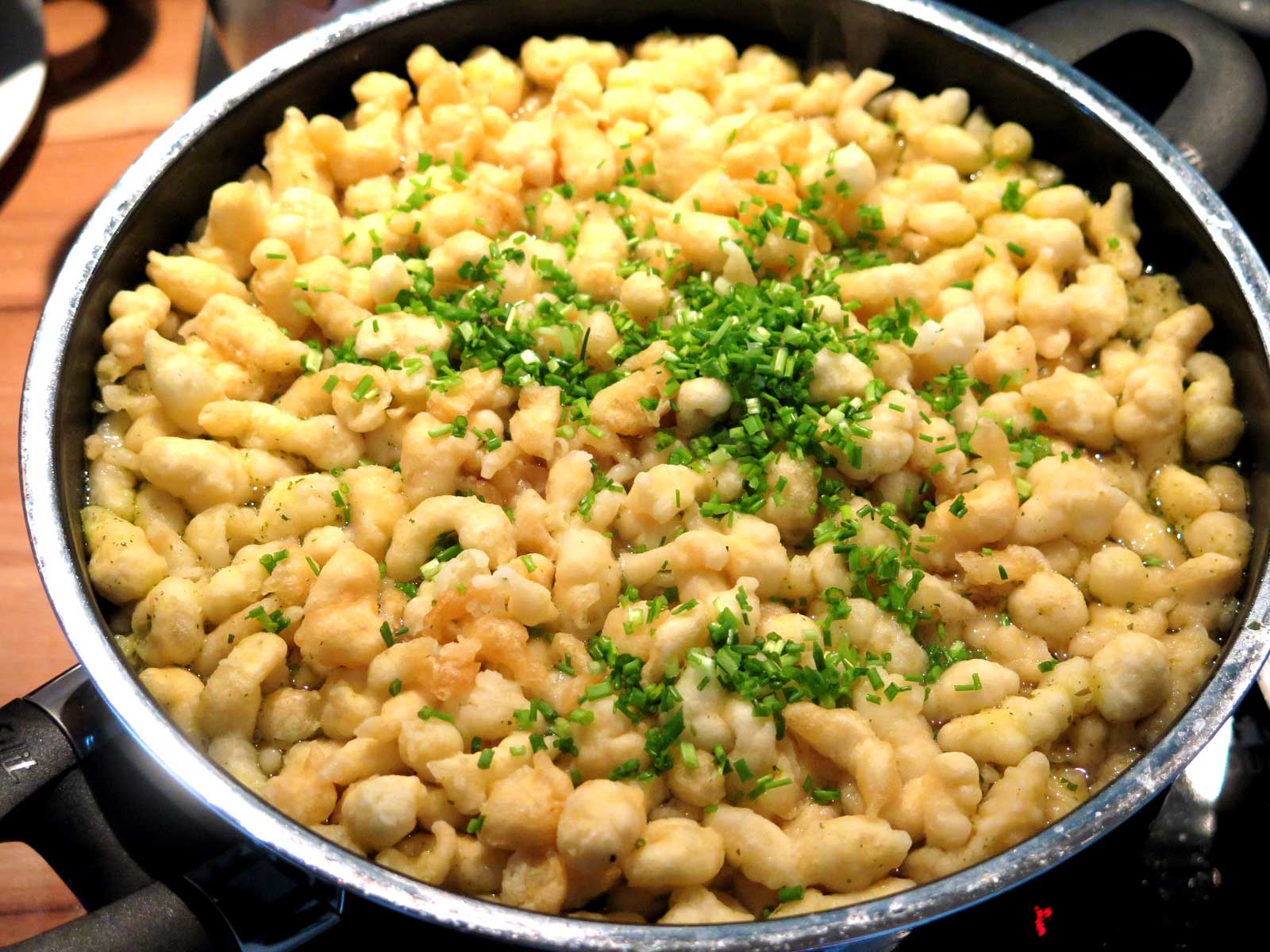 After they are drained, some people like to rinse them with hot water to get some starch off.

To serve, they can be tossed in butter, and served as a side dish to meat, or instead of butter, they can be tossed with a sauce, or with cheese and onion. Some fans advocate salt, pepper and lemon zest. They can also be sprinkled with bread crumbs. Or, you can fry them with butter and onions. 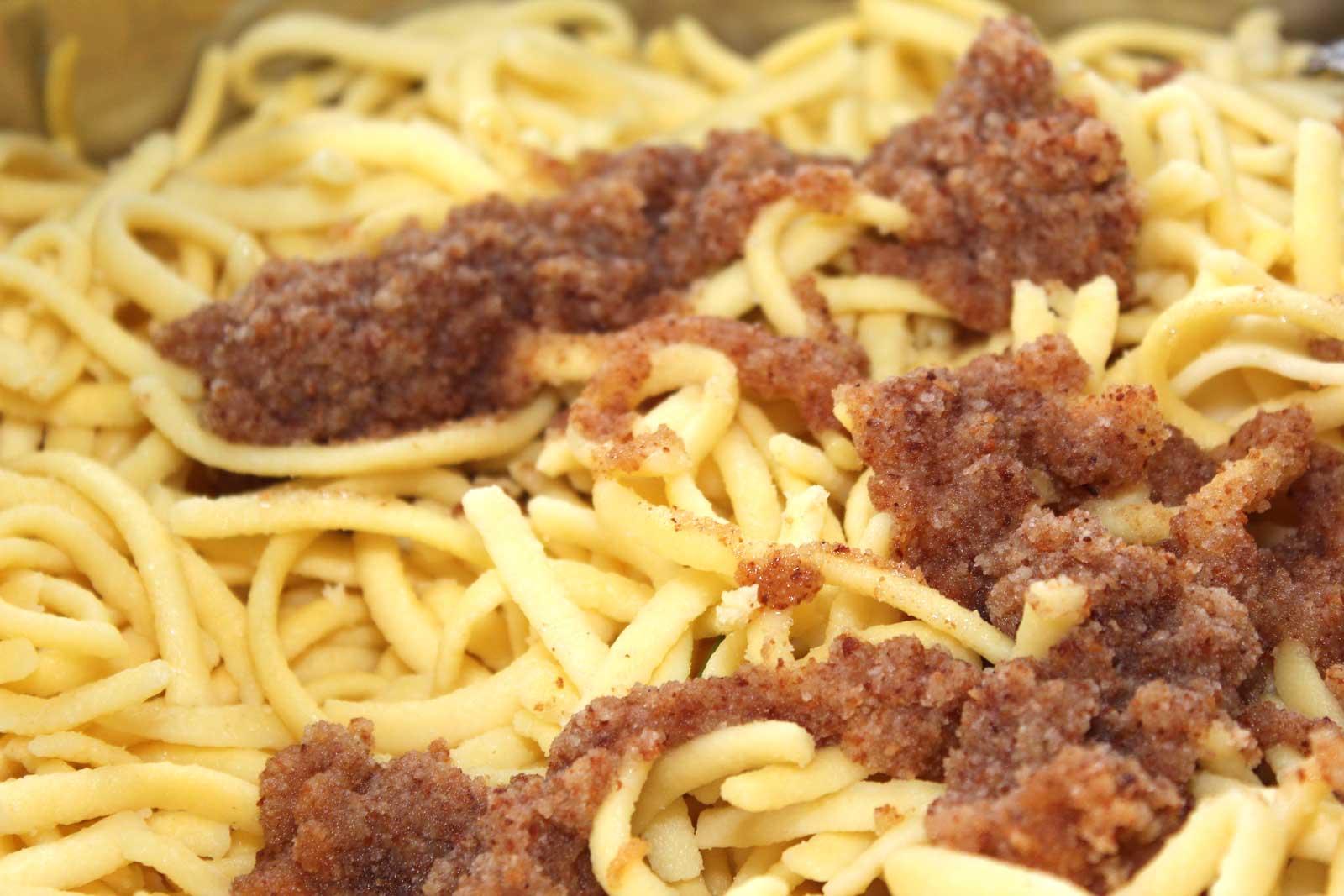 But they do need to be served right away, or be kept warm in a steamer, or zapped covered in the microwave with a few splashes of water on them to reheat before serving if allowed to go cold.

You can buy dried ones ready-made and ready to cook.

Hungarians make the noodles, too, using them as a bed for items such as goulash.

People in Swabia, Germany, claim to be the originators of these noodles. Hungarians would likely be scandalized to hear this.

“Spätzle” in Swabian German dialect means “little sparrows.” The shape of the short ones was thought to resemble small, squat sparrows.

Long ones may be called “Knöpfle” by some, even though “Knöpfle” means “little buttons” and may appear to be better applied to the short ones.

Called “Nokedli” or “Galuska” in Hungarian. Called “halushky” in Slovak.

This web site generates income from affiliated links and ads at no cost to you to fund continued research · Information on this site is Copyright © 2023· Feel free to cite correctly, but copying whole pages for your website is content theft and will be DCMA'd.
Tagged With: Dumplings, German Food, Spätzle