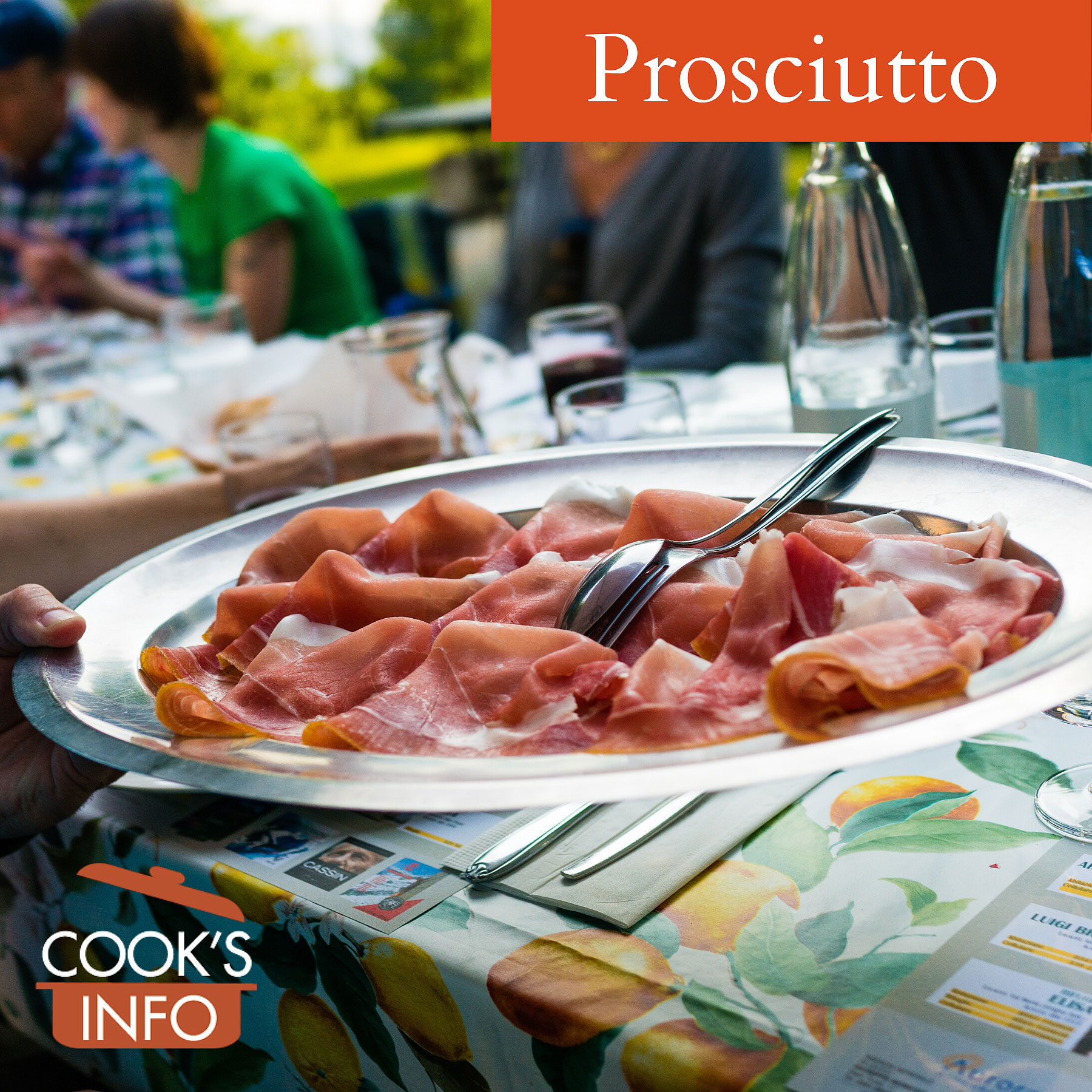 Prosciutto is an Italian ham that is cured and seasoned. The curing process “cooks” the ham, thus you can eat true “prosciutto” raw.

Prosciutto slices are always sliced razor thin, and they are so flavourful that a little truly goes a long way.

Though cured with salt, prosciutto generally ends up tasting sweeter and far less salty than other hams.

Prosciutto should be always be sliced paper thin for serving.

Prosciutto is produced in several different regions of Italy.  Nine of those regions have their prosciutto Protected Designation of Origin (PDO) certified.

Producers in Parma, Italy, say that theirs is the true prosciutto. Their association (the “Consorzio del Prosciutto di Parma”) has been fighting to protect and extend name protection for their product throughout the world. As of 2018, there were approximately 4,000 farms [1]”Around 4,000 farms, spread across ten regions, rear pigs destined to be turned into the speciality ham…” Wasley, Andrew, et al. Battle for the future of Parma Ham. London, England: The Bureau for Investigative Journalism. 30 March 2018. Retrieved May 2020 from https://www.thebureauinvestigates.com/stories/2018-03-30/this-little-piggy-went-to-market in Parma (down from 5,500 in 2004) authorized by the Consorzio to make prosciutto. The pigs are fed cereals, and whey leftover from the making of Parmesan cheese. The sign of prosciutto approved by the Consorzio del Prosciutto di Parma is a crown stamped on the meat.

Prosciutto is generally aged for around a year before being sold, though this varies from region to region.

Tuscan prosciutto is saltier than others, thus Tuscan prosciutto is called “saporito” meaning “salty, “tasty.” In constrast, Parma prosciutto is called “dolce” (sweet). The lion’s share of prosciutto production each year is from Parma. Tuscany, for instance, only turns out 400,000 prosciutto hams a year (up from 132,000 in 2001); the Parma region alone turn outs close to 9 million a year (2019 figures, down from 11 million in 2001.) [2]” “Their [Parma prosciutto] brand awareness is so strong,” says Fabio, “they have an internationally-recognised name and they’re huge: they put out nine million products a year, while the Consorzio del Prosciutto Toscano puts out 400,000.” Lambert, Anna. Rosy past, present and future. Brasted, Kent, England: New Food Magazine. 16 June 2019. Accessed May 2020 at https://www.newfoodmagazine.com/article/93165/rosy-past-present-and-future-tuscan-prosciutto/ 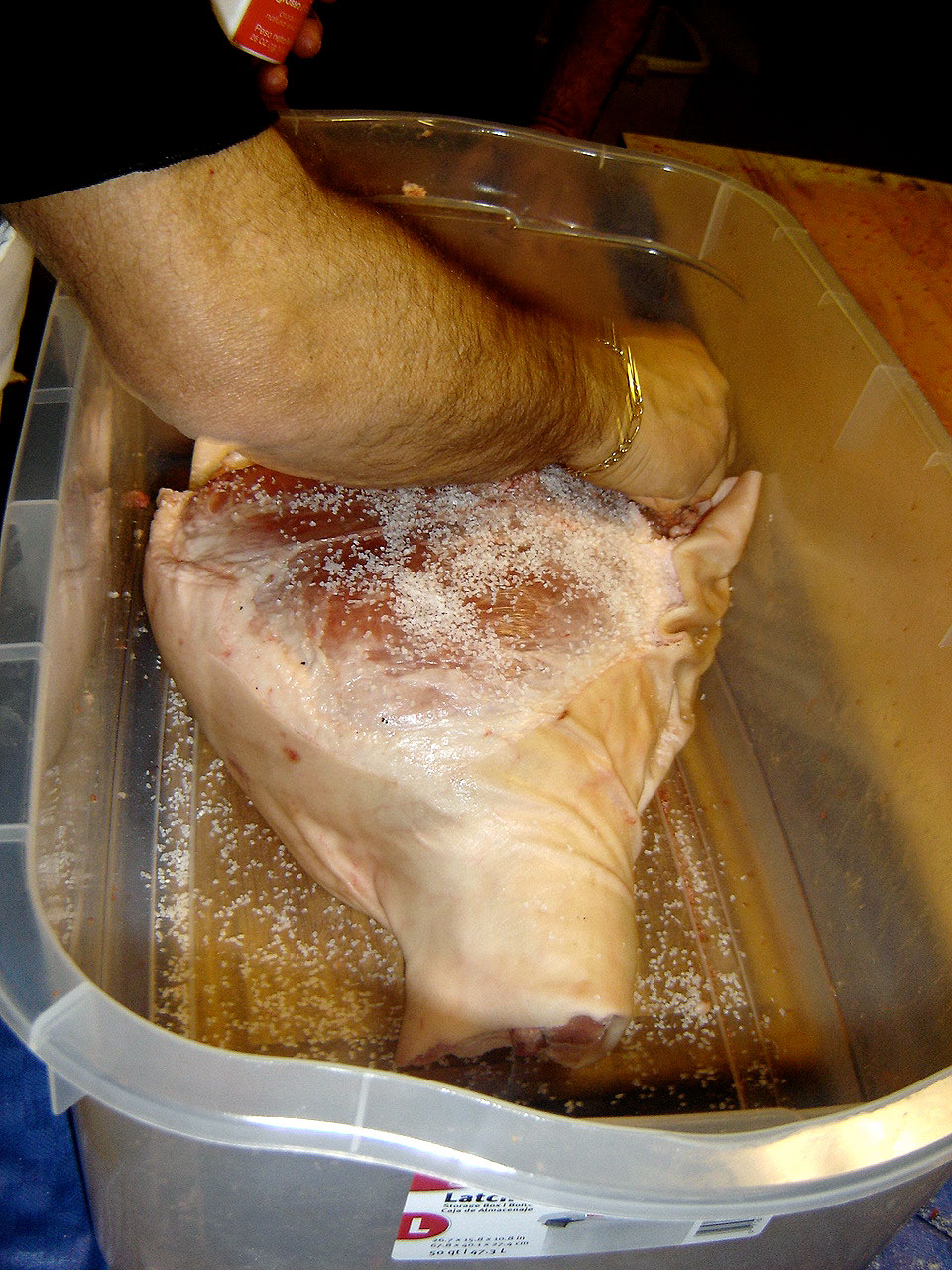 Beware of cheap imitations labelled prosciutto that may appear in some countries — not out of snobbery, but out of health concerns, because some of these imitation prosciuttos cannot be eaten raw.

Wrap tightly after purchase and store in refrigerator for up to 5 days. 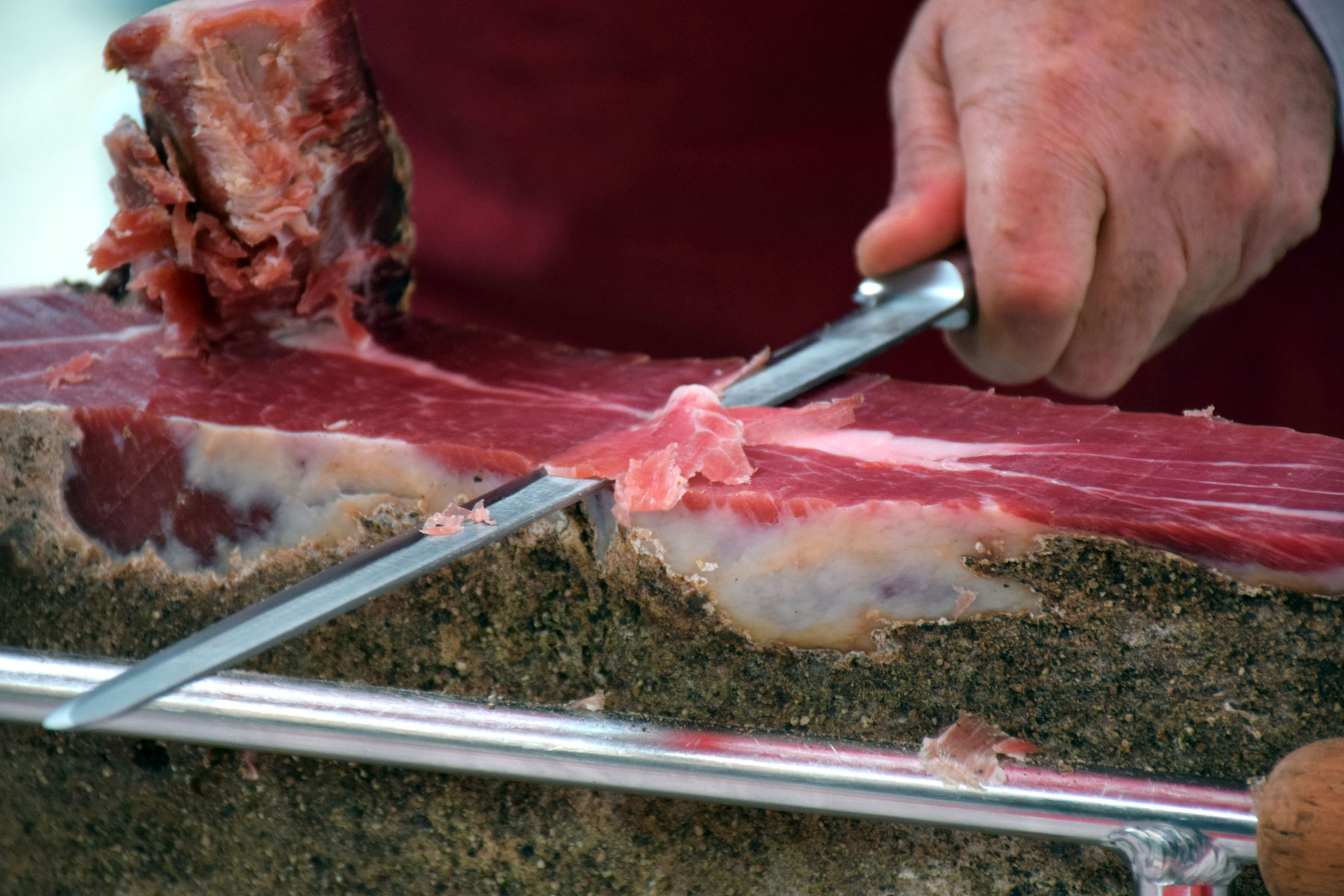 The Romans made something very similar to prosciutto. They called it “perna sicca”.

Prosciutto has been made in the San Daniele region for thousands of years. The Celts actually settled in that area in pre-Roman times, and they taught the Romans what they knew about preserving pork with salt. In San Daniele, there is still an old Roman road called Panisperna (panis meaning bread, and perna meaning Prosciutto.) The first mention of prosciutto in Parma dates from 100 BC.

The term “Parma Ham” was trademarked in Canada by a meat company called “Maple Leaf” in 1971. Three generations of lawyers were involved in the fight by the “Consorzio del Prosciutto di Parma” to reclaim its name there. The fight cost them between $200,000 to $300,000 CAD a year. The matter was finally settled as part of the Canada- Europe free trade agreement (entered into force September 2017.) [3]Hui, Ann. A cured trademark dispute: After 20-year battle, Prosciutto di Parma name heads for Canadian shelves. Toronto: The Globe and Mail. 25 December 2017.

The consortium owns the trademark in America.

Prosciutto Berico-Euganeo is a version of Prosciutto ham. It is raw, but it is eaten uncooked because of the aging process. It can be made in Lazio, Lombardy, Emilia-Romagna, Umbria or Veneto. The main production area, though, is in the Berici and...

Prosciutto di Carpegna is a version of Prosciutto ham made in Carpegna, a town near Montefeltro in the Marche region on the eastern side of Italy. It is raw, but it is eaten uncooked because of the aging process. The ham ends up roundish shaped....

Prosciutto di Modena is a version of Prosciutto ham. It is raw, but it is eaten uncooked because of the aging process. It can be made in three provinces of Emilia Romagna: Modena, Bologna and Reggio Emilia. A whole ham is pear-shaped. The meat is...

Prosciutto di Pietraroja is a version of Prosciutto ham made in Pietraroja in Benevento province in Campania just south of Naples. It is raw, but it is eaten uncooked because of the aging process. It is lightly smoked.The lean parts of it come out a dark...

Prosciutto di San Daniele is a version of Prosciutto ham made in San Daniele del Friuli in the province of Udine. It is raw, but it is eaten uncooked because of the aging process. The hams are guitar-shaped, with reddish-pink meat. The trotter from...

Prosciutto Toscano is a version of prosciutto ham made in Tuscany. It is raw, but it is able to be eaten uncooked because of the aging process.A whole one consists of the ham of the pig, its upper thigh and will weigh 8 to 9 kg (17 1/2 to 20 pounds.)...

This web site generates income from affiliated links and ads at no cost to you to fund continued research · Information on this site is Copyright © 2022· Feel free to cite correctly, but copying whole pages for your website is content theft and will be DCMA'd.
Tagged With: Affettati, Air-Cured Ham, Emilia-Romagna Food, Protected Designation of Origin