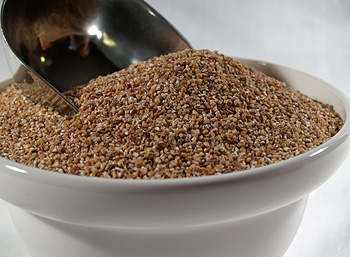 Red River Cereal was a Canadian mix of dried grains for making a porridge-like cooked cereal.

It was sold in distinct red boxes and came in Original, Ready to Serve and Ready to Serve flavoured (both Maple and Brown Sugar) versions. The Ready to Serve kind of Red River Cereal could be prepared in the microwave, or by pouring boiling water on them and letting them sit.

The ingredients in the original mix were cracked wheat, cracked rye, and flax (cracked and whole.) (Ingredient list valid as of January 2010.)

Red River Cereal was served hot and, like porridge, you put milk and sugar on it.

It had a somewhat gritty texture when cooked up. Detractors said it felt like sand in your mouth. Wags said it looked like birdseed, and tasted like it. It also often emerged from the cooking process lumpy and stiff.

Red River Cereal was particularly popular in Western Canada, but was sold in most grocery stores throughout Canada. That being said, many Canadians increasingly didn’t know about it as awareness of it faded with an aging population. It was available from time to time at some places in the United States, such as Iowa. 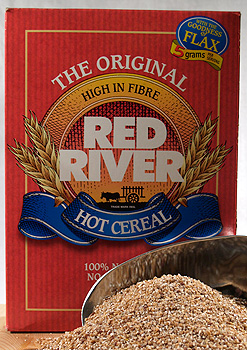 Simmer original mix Red River Cereal in water on the stove for about 10 minutes.

Red River Cereal was named after the Red River Valley of Manitoba, Canada. It was invented in 1924 (disregard stories about it being eaten on the pioneer trail) in Manitoba.

Red River Cereal was reformulated after the advent of microwave ovens to provide better results for microwave preparation.

By 2006, Red River Cereal was being made in Toronto) by the Robin Hood Multifoods Company.

In March 2001, Smuckers Foods announced that it had discontinued production of Red River Cereal.