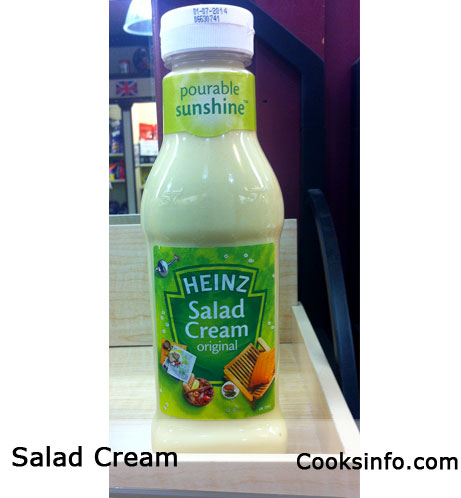 Salad Cream is a pour-able, pale yellow boiled dressing sauce with a creamy consistency. It’s a close cousin to Miracle Whip, though it’s not thick like either Miracle Whip or Mayonnaise. Rather, it has the thickness of a very thick pouring cream or of bottled salad dressings such as Ranch. It’s thick enough that sometimes you have to encourage it to leave the bottle with a few bangs on the bottom, but because it’s thinner than Mayonnaise, it’s easier to mix into salads. It also now comes in squeezee bottles, in which the Salad Cream is a bit thinner.

It has a sharper taste, and is less sweet, than Miracle Whip. It is made of vinegar, eggs, milk or cream, butter, sugar, mustard and other spices.

Heinz is the most well known brand, though Crosse & Blackwell and many supermarkets make their own brands. The Heinz brand is made from water, vinegar, vegetable oil, sugar, egg yolks, mustard, salt, cornflour (aka cornstarch), stabilisers and preservatives.

Though unknown in America, Salad Cream is widely available on store shelves in Canada and in Australia, and in the UK, its fans are legion.

Mix all dry ingredients. Mix together the eggs and the milk, then blend the dry ingredients in. Whisk vinegar in, adding slowly. Cook over low heat or a double-boiler until it becomes thick, like a white sauce. Remove from heat, let cool. Keeps for 2-3 days in the refrigerator. You may can it by putting it in a jar, and processing it in a hot water bath. (ED: The recipe didn’t say exactly how long to process it, or how long you could store it afterward).

A recipe for Salad Cream appears in Eliza Acton (1799-1859), called “English Salad Sauce”, and Mrs Isabella Beeton gives two recipes for it (recipes 507 and 508) in her “Book of Household Management” published October 1861.

Heinz first made their bottled version in 1914.

Salad Cream took a bit of a dive in the early 1990s, as Britain became more Foodie and Salad Cream was seen as infra dig. In the early 2000s, Heinz took a bit of a gamble and relaunched their product, trying to raise the cachet of it by raising its price to almost triple that of the store brands. They accompanied the new strategy with new commercials. It remains to be seen (2004) if the gamble has paid off, but the advertising of Salad Cream certainly has increased the sale of the store brands which are available for ⅓ the cost.

“The French, understandably, sneer at our salad cream, but they make something similar themselves and call it ‘mayonnaise charcutiere’ – pork butcher’s mayonnaise. It is rather more economical than a true mayonnaise, lasts longer, and is very good.” — Margaret Costa.

This web site generates income from affiliated links and ads at no cost to you to fund continued research · Information on this site is Copyright © 2022· Feel free to cite correctly, but copying whole pages for your website is content theft and will be DCMA'd.
Tagged With: English Sauces, Salad Dressings, Salads