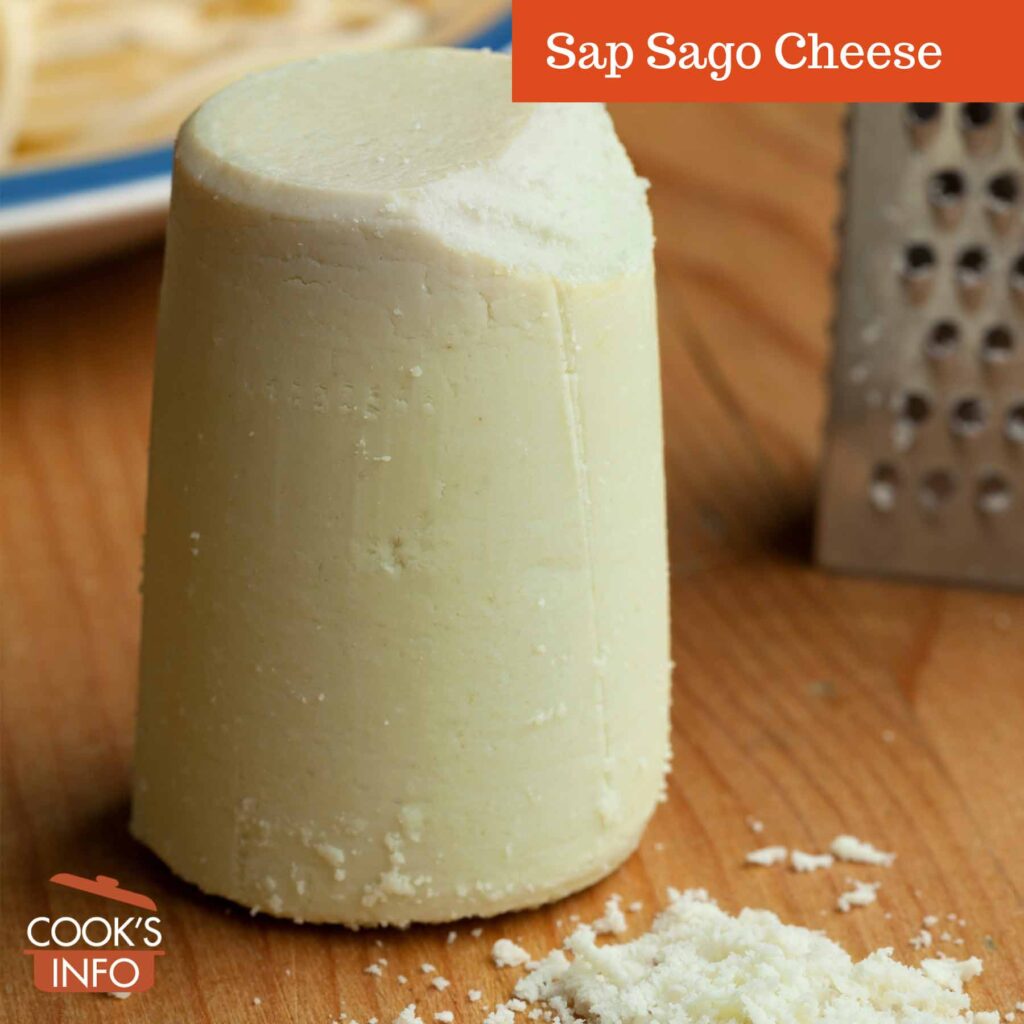 Sap Sago (aka Schabziger) cheese is a diminutive hard cheese used as a garnish or flavouring cheese. It can be grated on top of dishes, or blended into soft, fresh cheeses, or into butter, to make spreads.

The cheese is sold in small cone-shapes wrapped in silver foil. Each cone is only about 5 cm tall (2 inches), weighing about 85 g. There is no rind on the cheese.

The cheese is an almost very pale green colour, with a pungent, salty, sweet taste.

The cheese is made using raw milk from cows (skim milk and buttermilk.)

What gives the cheese its colour is juice from a type of clover called “blue melilot” (aka “Trigonella caerulea“, aka “blue fenugreek”).

The milk and melilot juice are heated to 32°C (90°F). Acid (lactic, citric or acetic) is then added to make it curdle. The curd is removed. They take the whey, and curdle it once again. The resultant curds from that second curdling, called “Ziger”, are what is used for the cheese. They are pressed into cone moulds for 6 to 8 days, then aged 2 to 6 months.

It is made by Geska (Gesellschaft Schweizer Kräuterkäse-Fabrikanten). The cheese is sometimes called Glarner, as it is made in the Swiss Canton of Glarus.

Sap Sago Cheese making was codified in regulations in 1463.

Clementine Paddleford wrote about the cheese in 1946 for Gourmet Magazine:

“First cheese to arrive from the Continent [since the war] is the sapsago of Switzerland, made of skim milk and herbs, a pale green substance, cone-shaped, hard as a rock, a cheese for the grater, for flavoring egg dishes, bowls of soup, macaroni, spaghetti. It’s good over the plain boiled potato. Wherever a dusting of cheese is indicated in a recipe, sapsago can do the job and in a way different. The Swiss love the green cheese finely grated, then blended with butter to spread on thin slices of dark bread. A variation oddly pleasant is to spread bread with butter and grated sapsago, then lay on thin slices of sausage or ham, and broil until sizzling. Sapsago is around town: Charles and Company, 340 Madison Avenue, has it, also Maison Glass, 15 East 47th Street.” — Paddleford, Clementine (1898 – 1967). Food Flashes Column. Gourmet Magazine. January 1946.

This web site generates income from affiliated links and ads at no cost to you to fund continued research · Information on this site is Copyright © 2022· Feel free to cite correctly, but copying whole pages for your website is content theft and will be DCMA'd.
Tagged With: Swiss Cheeses