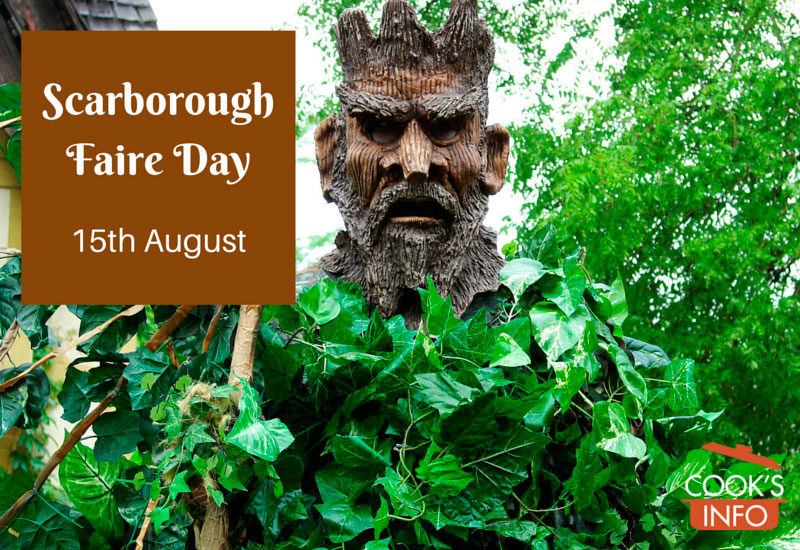 The 15th of August is Scarborough Faire Day.

Scarborough Faire in England was a real fair. It took place yearly, starting in the 1200s and running until sometime in the 1700s.

It would last for six weeks each year, from Assumption Day until Michaelmas Day (15 August to 29 September.)

Though people came from all over Europe for it, locals felt that the fair didn’t actually help the economy of the town because it took business away from established shops inside the town. Romance of the notion of the fair aside, it was actually like today’s version of a mall just outside town killing the downtown core:

Scarborough’s prosperity slumped. The number of bakers reduced from eight to four, all four drapers closed their shops, four butchers, ten weavers and eleven tailors, all closed down and only half of the forty public houses remained in business. Records show that ‘grass now grew in the streets of Scarborough. Shipping and house alike had fallen into decay’. [1]Discovery Yorkshire Coast. Scarborough Fair. Accessed May 2016 at http://www.discoveryorkshirecoast.com/history/scarborough/scarborough-fair.

There is now a Scarborough Faire held in Waxahachie, Texas. It is a festival to celebrate the 1500s. It runs from the first weekend in April until Memorial Day Monday in the States.

Are you going to Scarborough Fair?
Parsley, sage, rosemary and thyme
Remember me to one who lives there
For once she was a true love of mine
— traditional song, popularized by Simon and Garfunkel in 1966.