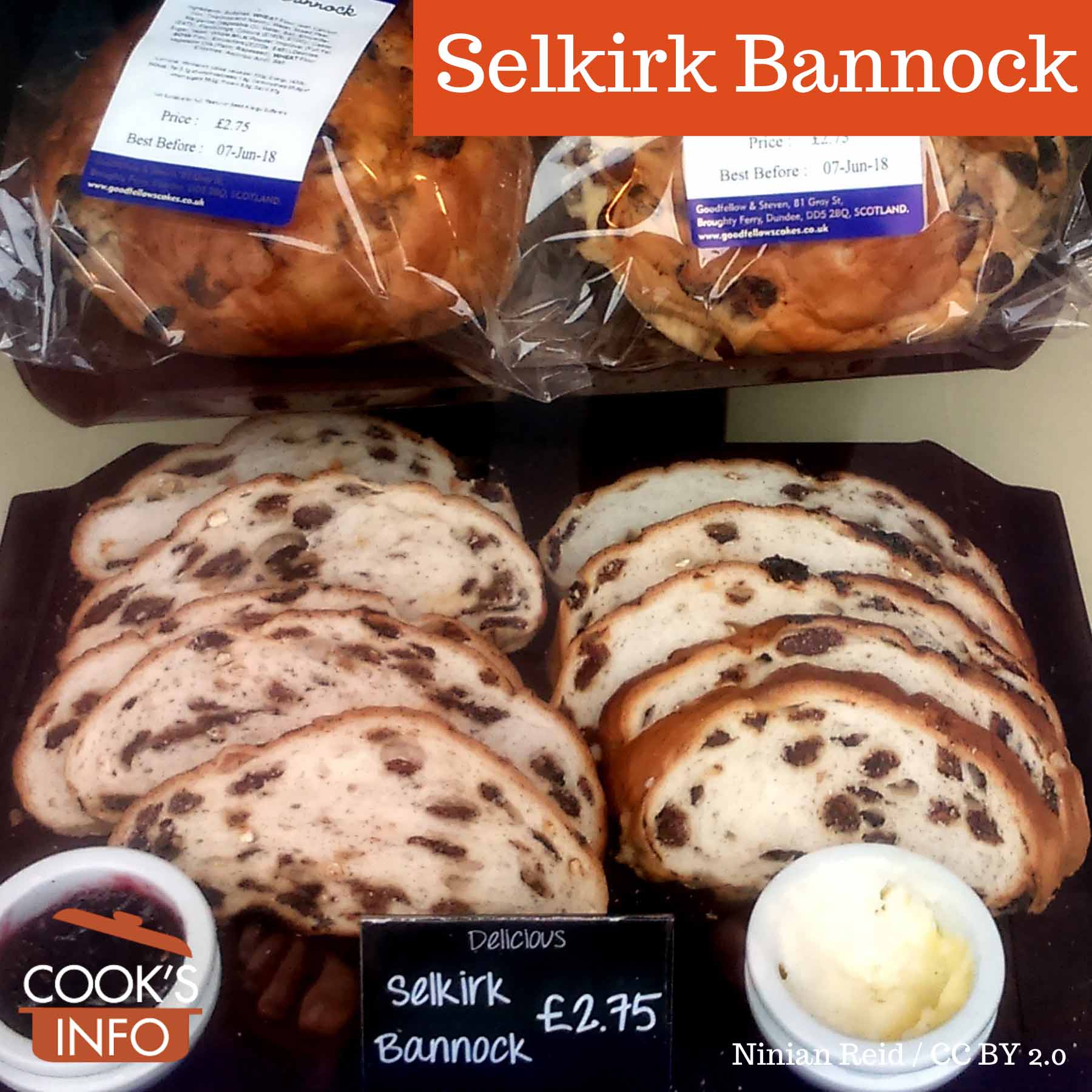 Selkirk bannock is made with wheat flour, butter, and a generous amount of sultana raisins: in fact, the sultanas should make up almost half as much in weight or volume as flour. Some versions add candied peel as well.

It has a flat bottom and rounded top. It is glazed with a wash of milk and sugar.

Selkirk bannock was first made with regular bread dough; later it came to be made with a purpose-made dough that starts as a sponge dough (aka a “biga.”) The sponge dough is allowed to ferment overnight, and then mixed with other ingredients to make the final dough. Some people still make it this way, using the starter, saying the flavour is better, and the texture is softer and moister.

Some bakeries, such as Dalgetty’s in Selkirk, Scotland make a dough with flour, butter, lard and warm milk. They let the dough rise overnight, then punch it down, add the sugar and sultanas, then shape it into loaves, allowing it to rise again, then glaze and bake it.

A few bakers are making a whole wheat flour version of Selkirk bannock.

To serve, slice thinly and butter.

The first known commercial maker of Selkirk bannock was a Robbie Douglas. He started selling it in 1859 in the market square in Selkirk. His bannock became known for its rich, good taste.

Robbie Douglas’s bakery was actually south of Selkirk in Hawick, 9 miles (14 km) away , in a corner shop at 16 Bourtree Place. [1]The site was later occupied by a bakery named Houston’s, which was still extant as of 2006, but closed sometime between then and 2019. Irvine, Peter. Rise and shine: Peter Irvine locates the best bakers. Glasgow, Scotland: The Herald. 18th February 1994. Accessed March 2021 at https://www.heraldscotland.com/news/12684319.rise-and-shine/

One of the people who worked for Douglas was an Alex Dalgetty. He knew the recipe and passed it down through his family. He opened a bakery in Galashiels, 5 miles (8 km) north of Selkirk. 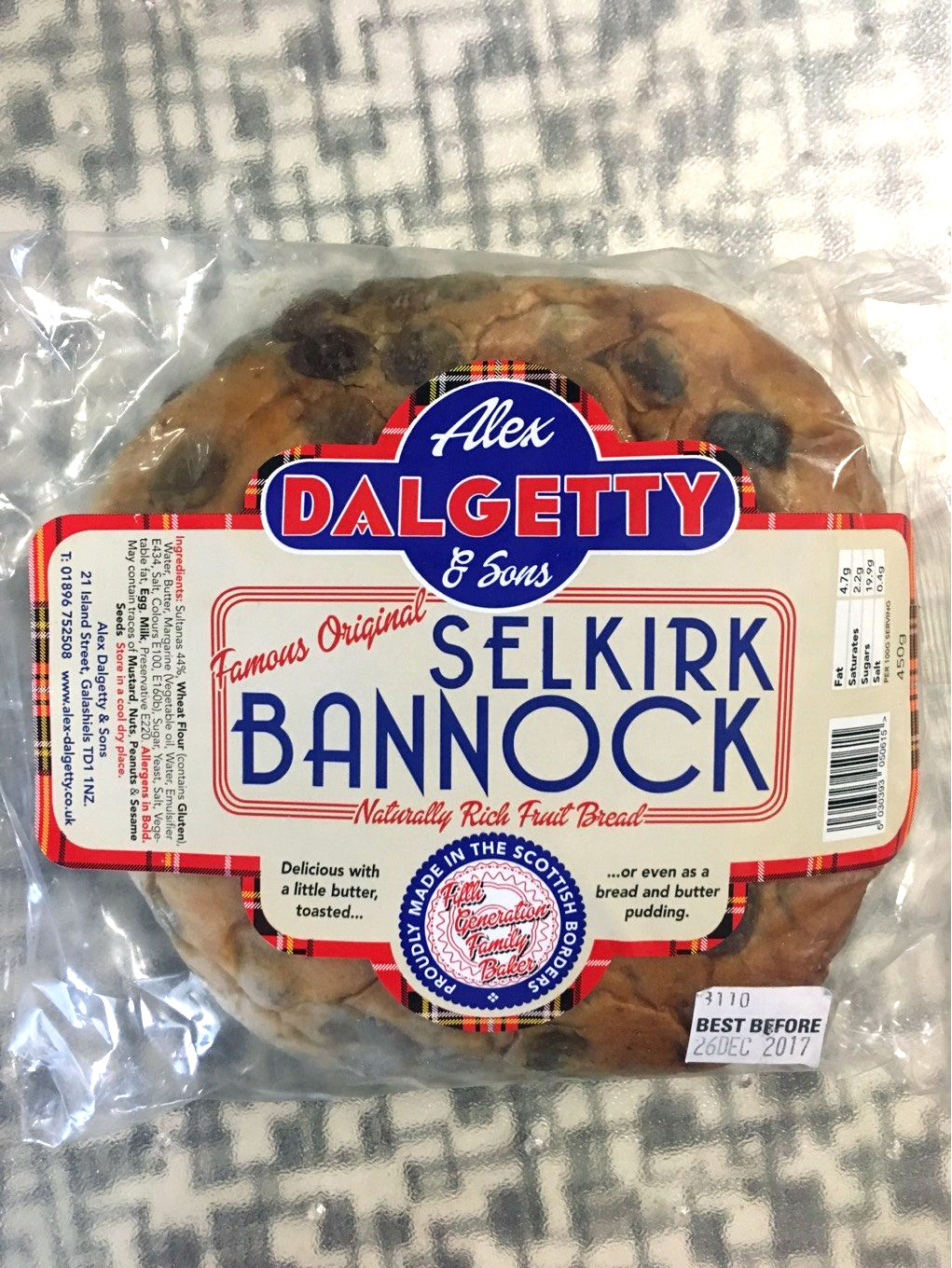 In 2002, bakers in Selkirk began talking about getting European Protected Designation of Origin (PDO) for Selkirk bannock, but nothing came of it.

Queen Victoria reputedly had Selkirk bannock in 1867 when having tea in Abbotsford with Charlotte Hope-Scott, the granddaughter of Sir Walter Scott. In fact, though Charlotte and her husband James had lived at Abbotsford since 1848, Charlotte had died during childbirth in 1858. So while Charlotte’s ghost may indeed have hovered nervously during the royal visit, it was James’ second wife, Lady Victoria Alexandrina, daughter of the Duke of Norfolk, who would have done the honours of pouring tea.

Here is Queen Victoria’s account of the visit, from an entry made by her in her journals for Thursday, 22 August 1867: “We went through some passages into two or three rooms where were collected fine specimens of old armour, etc., and where in a glass case are Sir Walter’s last clothes. We ended by going into the dining-room, in which Sir Walter Scott died, where we took tea… ” (Highland Journals, Volume II.)

The eating of the Selkirk bannock by Queen Victoria is confirmed in the memoirs of James Hope-Scott. You also learn that she was at their house for less than an hour, and mostly stopping as a tourist to see the effects of Sir Walter Scott. “Her Majesty visited Melrose and Abbotsford on Thursday, August 22, with Princess Louise, Prince and Princess Christian, the Duke and Duchess of Roxburghe, and the Duke of Buccleuch. The Queen having viewed Melrose Abbey, Mr. Hope-Scott and his family were honoured, later in the day, by her Majesty’s presence at Abbotsford, which was reached shortly after six o’clock. In the fields in front of the lodge, and for a great distance along the road, was a great concourse of people, many of whom had waited for hours, and vehement cheering rang through the Abbotsford woods….. Her Majesty was received by Mr. Hope-Scott, Lady Victoria Hope-Scott, and Miss Hope-Scott, Lord and Lady Henry Kerr, Miss Kerr, and Miss Mackenzie. Mr. Hope-Scott bowed to the Queen, and led the way to the drawing-room, where a few minutes were passed. Her Majesty then in succession passed through Sir Walter’s library, study, hall, and armoury, and viewed with great interest all these memorials. The royal party then proceeded to the dining-room, where fruits, ices, and other refreshments had been prepared, but her Majesty partook only of a cup of tea and ‘Selkirk bannock.’ When the Queen was passing through ‘Sir Walter’s library,’ some photographic views of Abbotsford, which had been taken recently by Mr. Horsburgh of Edinburgh, attracted her attention, and she graciously acceded to the request of Mr. Hope-Scott that her Majesty might be pleased to accept of a set of the photographs. Her Majesty expressed to Mr. Hope-Scott the great pleasure she had experienced in visiting what had been the residence of Sir Walter Scott. The Queen and suite then entered their carriages, and left Abbotsford about seven o’clock.” — Robert Ornsby. Memoirs of James Robert Hope-Scott, Volume 2. Chapter XXV, 1867-1869.

This web site generates income from affiliated links and ads at no cost to you to fund continued research · Information on this site is Copyright © 2021· Feel free to cite correctly, but copying whole pages for your website is content theft and will be DCMA'd.
Tagged With: Bannock