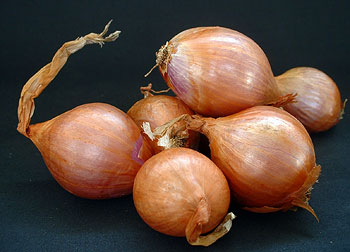 In North America, the UK and Europe, Shallots are small onions with a pear-shaped bulb. They are commonly used in French cooking owing to their delicate flavour when cooked, but they are much hotter when eaten raw.

In each bulb there are 2 to 3 cloves, with each clove covered in a light, paperish skin that may be gold or reddish brown. If a recipe calls for a Shallot, what is meant is just one clove. The flesh of the cloves is off-white with a bit of purple hue.

Indonesian cooking tends to use shallots instead of onions. Southern Indian cooking is also more likely to use Shallots in place of onions, whereas cooking in the north of India tends to favour regular onions.

Choose Shallots that are firm and heavy for their size, and have dry skins with no sprouting.

Australians and Jamaicans use the term “Shallots” to describe green onions.

Shallots have a subtler, sweeter flavour than either onions or garlic. Browning them, though, will cause the taste to go somewhat bitter, so if you are sautéing them, just cook them until they are translucent and soft.

If a recipe calls for one Shallot, what is meant is just one clove. To skin a clove, top and tail it, then the skin should slip off. You can also use the tops, chopped.

If you have to peel a lot of Shallots, soak them first in cold water for 20 to 30 minutes to make them easier to peel.

Shallots are used in making the French sauce called “Béarnaise”.

Per 3 to 4 Shallots, substitute 1 small onion, yellow or white, or the bulbs of green onions or leeks.

Shallots are a source of potassium and are low in sodium.

Store for a month in a cool place outside of refrigerator.

Shallots probably originated in the Middle East. They were first brought to Europe by the crusaders.

Little breezes dusk and shiver
Thro’ the wave that runs for ever
By the island in the river
Flowing down to Camelot.
Four gray walls, and four gray towers,
Overlook a space of flowers,
And the silent isle imbowers
The Lady of Shallot.” — Alfred Lord Tennyson. Published 1831.

A trading town in Southern Palestine was known as “askalon” by the Greeks, and this became eventually our English word Shallot. It is also reflected in the scientific name now attached to them.