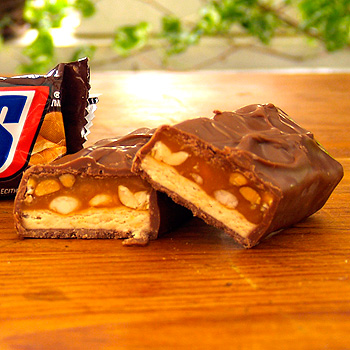 Contents hide
Snickers Bars are candy bars made by the Mars company.

They have a base of peanut butter nougat, which is topped by a layer of roasted peanuts in caramel. The whole thing is covered in chocolate, and then packaged in a brown wrapper. Each Snickers Bar contains exactly 15 peanuts.

They are made in Chicago by Masterfoods USA, in a Spanish-looking factory with a red-tile roof. Every bar that leaves the factory goes through a metal detector. Creating the chocolate bars is all automated by machine, there are no people involved in making it — though people are employed for quality control. It takes one hour for a Snickers Bar to be made, from start to packaging.

The nougat is made from whipped egg white, corn syrup, sugar and salt (at this point, it’s the same nougat that is used for Milky Way), then it has peanut butter added to it. Machines then pipe the nougat out onto a roller, where its flatted to the right thickness needed for the base of the bar. Then it is cooled, covered with caramel and peanuts, and topped with a thicker caramel layer.

Machines slice it into the right size bars, then the bars ride on a conveyor belt through an area where they are drenched in chocolate. A small metal thing makes the distinctive chocolate squiggle on top. The Snickers Bars then pass through human quality control, and are packaged.

Snickers Almond Bar is sold in the United States. It is what used to be called a Mars Bar until 2000. In this version, almonds are used instead of peanuts, and the nuts are in the nougat layer, instead of in the caramel layer.

The nougat actually tastes better a few days old than it does fresh.

Franklin Mars introduced a Snickers bar in 1923, but one that didn’t have any chocolate coating. The bar as we know it today was introduced in 1930 at a cost of 5 cents.

The bars were hand-wrapped until 1944.

Snickers Bars were launched in the UK in 1969 under the name of Marathon. In 1998, Mars harmonized the UK name to Snickers.

In 2004, Mars revived the “Marathon” name by creating the “Snickers Marathon” energy bar. In May 2008, they announced they would be reviving the Marathon name for Snickers Bars for a three-month trial period.

Deep-fried Snickers Bars reached Florida by 2002, appearing at the Florida State Fair. To make them, a wooden skewer is inserted in one end of the bar to act as handle. The bar is then dipped in batter and deep fried. When done, the bar is removed, drained, and dusted with icing sugar.

In Episode 89 (aired 6 October 1994) of the American comedy series “Seinfeld”, Elaine reveals that her boss eats his Snickers bar with a knife and fork: Elaine:

Hey, you wanna hear something weird? Mr. Pitt eats his Snickers bars with a knife and fork.George:

Why does he do that?George:

He probably doesn’t want to get chocolate on his fingers. That’s the way these society types eat their candy bars.

Daily Telegraph. Mars to bring back Marathon Bars. London. 12 May 2008.