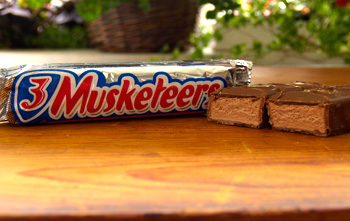 Contents hide
Three (3) Musketeers is a candy bar sold in the United States and in Canada. It is whipped chocolate nougat coated with milk chocolate.

In America, the wrapper portrays the three musketeers: Athos, Porthos and D’Artagnan. Even though D’Artagnan was a johnny-come lately musketeer, a now-unknown marketer decided to choose D’Artagnan instead of the original musketeer, Aramis.

In Canada, the thorny literary problem is dodged by omitting the musketeers picture on the wrapper.

The nougat pieces are conveyed on a mesh belt through a stream of milk chocolate. The mesh allows the bottoms of the bars to get coated by a chocolate covered wheel that rotates and brushes up against the mesh. Then the bars are cooled, inspected and packaged.

They are made in two cities in the United States — Chicago, Illinois and Elizabethtown, Pennsylvania, US — and one city in Canada, Newmarket, Ontario.

The 3 Musketeers Bars was the third product to be introduced by the Mars Company.

The “3” in the name will make more sense if you know that the bar was originally introduced in 1932 as 3 pieces of nougat, each a different flavour: chocolate, vanilla and strawberry.

In 1945, the nougat was made all chocolate. The company kept the bar’s name, even though the “3” no longer made sense. Presumably, renaming it to “The Lone Ranger” was ruled out.

The change also made it the same as what is sold outside the United States as a Milky Way bar, magnifying the confusion in the naming scheme for candy bars made by the Mars company.