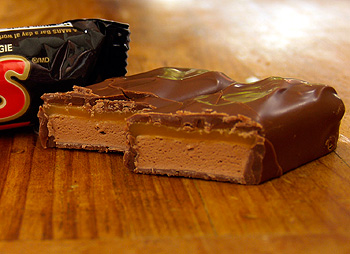 Contents hide
A Mars Bar is a candy bar made and sold commercially by the American company called Mars.

Mars Bars internationally are sold in a black wrapper, with the name in red letters outlined in gold. In America, however, they are sold in cream-coloured packaging.

There are, though, two different Mars Bars.

The history of Mars Bars starts in 1923 with a candy bar created by Frank Mars. He sold it as a “Milky Way” bar. It had no nuts in it.

In 1936, the Mars company (Frank died in 1934) introduced a version with almonds, and called this version a “Mars Bar.”

When the Mars company began selling the “Milky Way” outside of America, with no nuts, in Canada and in the UK, they decided to call it a “Mars Bar.”

It’s not known who made the decision, how, or why, but the confusion has continued since.

4 ingredients: bottom layer of chocolate and malt flavoured nougat and almonds, top layer of caramel and everything coated in milk chocolate. The nougat is about the density of a marshmallow, and is light-chocolate in colour. Renamed to Snickers Almond as of 2000.International

3 ingredients: bottom layer of chocolate and malt flavoured nougat (whipped as of 2002), top layer of caramel and everything coated in milk chocolate.

In 2000, the American version of a Mars Bar was renamed to “Snickers Almond.” The name “Mars Bar” was retired in America in the same year, then revived in 2010 for exclusive sale through Wal-Mart stores, again as a chocolate almond bar, in cream-coloured packaging.

In Germany at one point, Mars Bars with almonds were sold as “Mars Mandel” (Mandel meaning “almond”.)

The size of Mars Bars sold in the UK has changed several times over the years, but not the price. The most recent size change was in May 2009, when the weight was reduced from 62.5g to 58g (which is the current UK weight, as of 2010.) [1]

In Australia and the UK, the bars are made for Mars by the Masterfoods Corporation, an American-owned company.

Deep Fried Mars Bars began appearing at fish and chip shops in the west of Scotland in the early 1990s. They are dipped in the same batter used for fish, then deep fried. They are usually chilled first so that the bar won’t get too hot and melt while the batter is cooking. The concept was actually more for fun than anything else at first, though they are still available at many shops.

On 1 May 2007, Mars UK announced that it had started using whey that might have traces on rennet in it in their bars. Brands affected included Mars, Twix, Snickers, Maltesers, Bounty, Milky Way and Minstrels. They announced on 20 May 2007 that they would reverse their decision, after receiving a landslide of complaint from vegetarians.

In February 2012, Mars announced that as of 2014, world-wide, it would no longer be selling individual portion chocolate bars with more than 250 calories in them. It was assumed that the calorie reduction would occur by down-sizing the bars. The company also announced that by 2015, they were aiming to decrease sodium in all its products by 25%.

Reilly, Jill. Mars slims down: Manufacturers to stop selling bars with more than 250 calories in them. London: Daily Mail. 17 February 2012.