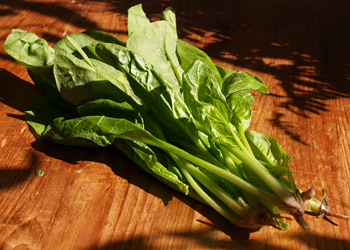 Spinach is a dark, leafy-green vegetable.

When you are buying spinach fresh, look for small, narrow stems — this indicates the spinach is younger and therefore more tender. Make sure you wash fresh spinach really well to get all the sand and grit out, or everyone will be grinding their teeth at the table.

To prepare, remove the stems, and put the spinach in a sink full of water. Swish the leaves around assertively, and then let stand for a few minutes so the sand can fall out and to the bottom of the sink. Remove the spinach before you drain the sink so that the sand doesn’t get caught back up in the leaves.

Spinach is an annual plant.

Wash spinach in salted water. To steam spinach, place in covered saucepan with no water — just spinach, and cover for a few minutes. Cook only until wilted.

If a recipe asks you to drain cooked spinach really well, put it in a colander in the sink and press down on it using a small bread plate.

Though spinach is high in iron and calcium on paper, the oxalic acid also in spinach prevents all of it from being available to the body:

“Spinach has a fair amount of iron, but not really much more than other green leafy vegetables. The problem is that the iron in spinach is not very bioavailable.” [1]Grenrock, Samantha. Spinach Day: This leafy green packs a punch, UF expert says. Gainesville, Florida: Institute of Food and Agricultural Sciences, University of Florida. 3 March 2018. Accessed February 2021 at http://blogs.ifas.ufl.edu/news/2018/03/23/spinach-day-this-leafy-green-packs-a-punch-uf-expert-says/

It is a good source of vitamin A (the 85 g serving provides 114% of your US recommended daily intake.)

Cooked spinach is a better source than raw of beta-carotene, lutein, calcium, magnesium, and iron. The cooking breaks down cell walls, releasing more of the nutrition; it also releases nutrients such as iron and calcium that are bound to the oxalic acid. 3 cups of raw spinach has 90 mg of calcium; 1 cup cooked has 259 mg of calcium.

That being said, cooking spinach in water can leach away vitamin C, folate and thiamin. To maximize nutrition, you’d use a cooking method such as steaming, stir-frying, microwaving, roasting, grilling, etc. Or, reserve the cooking water for another dish.

Registered dietitian Leslie Beck writes that spinach is super nutritionally to kale in a few says:

“When it comes to antioxidants, though, spinach outshines kale considerably. Per serving, [spinach] delivers five times more beta-carotene (11.3 mg per one cup cooked), seven times more brain-friendly lutein (20.3 mg per one cup cooked) and twice as much vitamin E. Compared to kale, one cup of cooked spinach is a good source of iron (6.4 mg) and an outstanding source of both potassium (839 mg) and folate (263 mcg). Spinach also is one of the best food sources of betaine, a phytochemical that acts as an antioxidant and helps fight inflammation in the body.” [2]Beck, Leslie. Test your nutrition smarts: Which of these foods packs the most nutritional heft? Toronto, Canada: The Globe and Mail. 30 May 2022. Accessed May 2022 at https://www.theglobeandmail.com/life/health-and-fitness/article-test-your-nutrition-smarts-which-of-these-foods-packs-the-most

Thoroughly dry by using a salad spinner or by blotting with paper towels. Wrap in dry paper towels and seal in a plastic bag for storage.

Spinach is probably native to Persia (Iran), and was being cultivated there before 300 AD. But, it remained outside the Greek and Roman Empires, and was never known by them (source: A. de Candolle 1884.) It reached China in the mid 7th century; the Arabs brought it with them when they invaded Spain. It became popular in Spain, but by the 1500s it was still a novelty in Italy, and it only reached Britain in the middle of that century.

French classic chefs considered it a delicate vegetable because in their mind, unlike other vegetables, it did not impose its taste on a dish, but rather the taste could be moulded. Generations of children since then might beg to disagree.

Spinach is amongst the food items that Catherine de Medici is reputed to have brought from Florence to Paris with her; thus, (again) reputedly, many French dishes with spinach in them are called “à la Florentine.”

This web site generates income from affiliated links and ads at no cost to you to fund continued research · Information on this site is Copyright © 2023· Feel free to cite correctly, but copying whole pages for your website is content theft and will be DCMA'd.
Tagged With: American Food, Oxalic Acid, Spinach