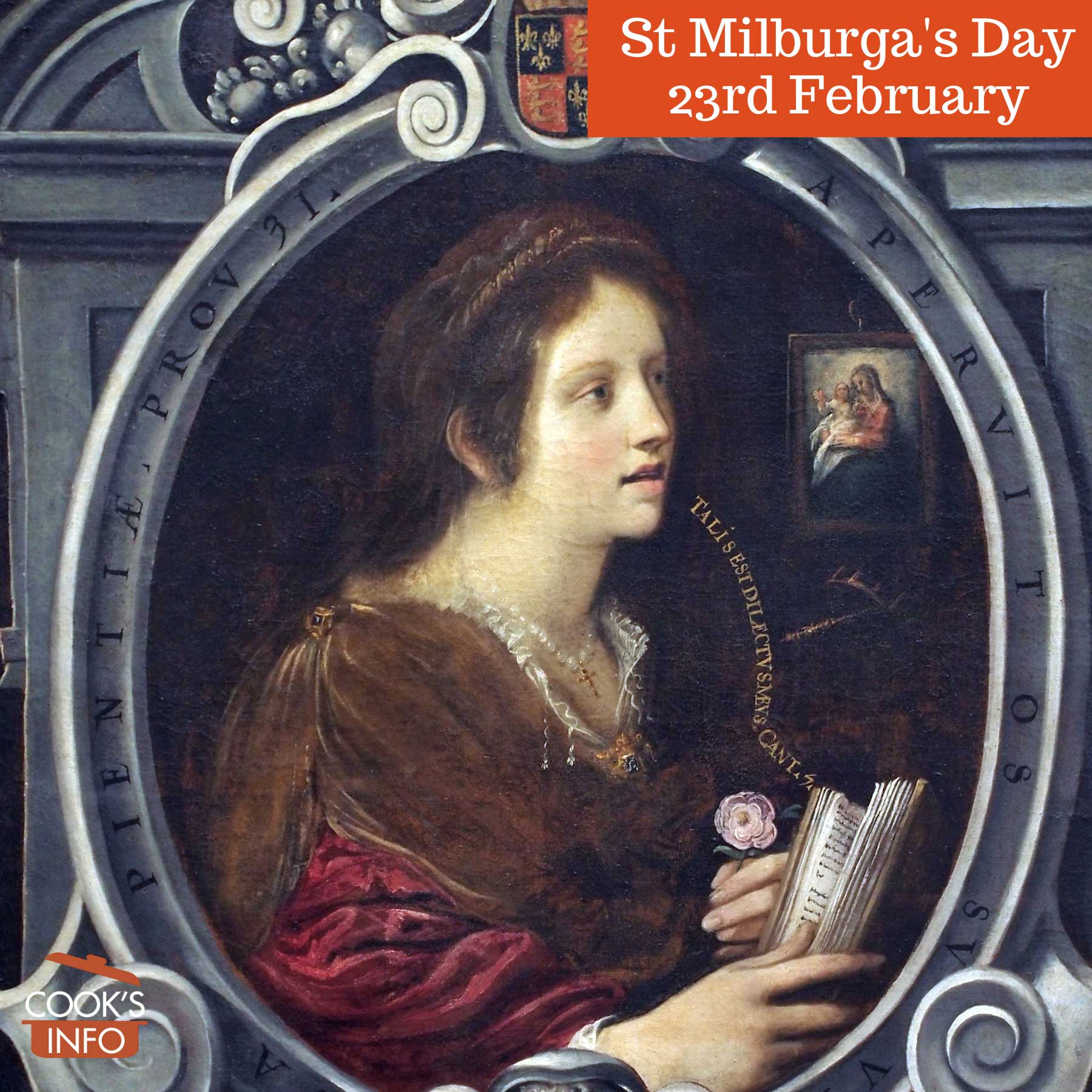 The 23rd of February is St Milburga’s Day.

In the food world, she is associated with water and barley.

She was educated in France, and became the Benedictine abbess of Wenlock Abbey in Shropshire, England circa 680 AD, a post she held until her death circa 715 AD. [2]The Oxford Dictionary of Saints.

Her horse struck a rock with its foot causing water to spring forth, and this is now St Milborough’s well in the village also named after her, Stoke St Milborough:

The well, which is still extant, has had many associations over the centuries:

“It was reported in 1905 that on Maundy Thursday young men used to carry branches round the town, stopping at St. Mildburg’s well, where girls would throw in pins and wish for sweethearts while the youths drank beer brewed from water off the church roof. The well water was also believed to cure sore eyes.” [4]Hope, Robert Charles. The Legendary Lore of the Holy Wells of England. London: Llancerch Publishers. 1893. Page 140. 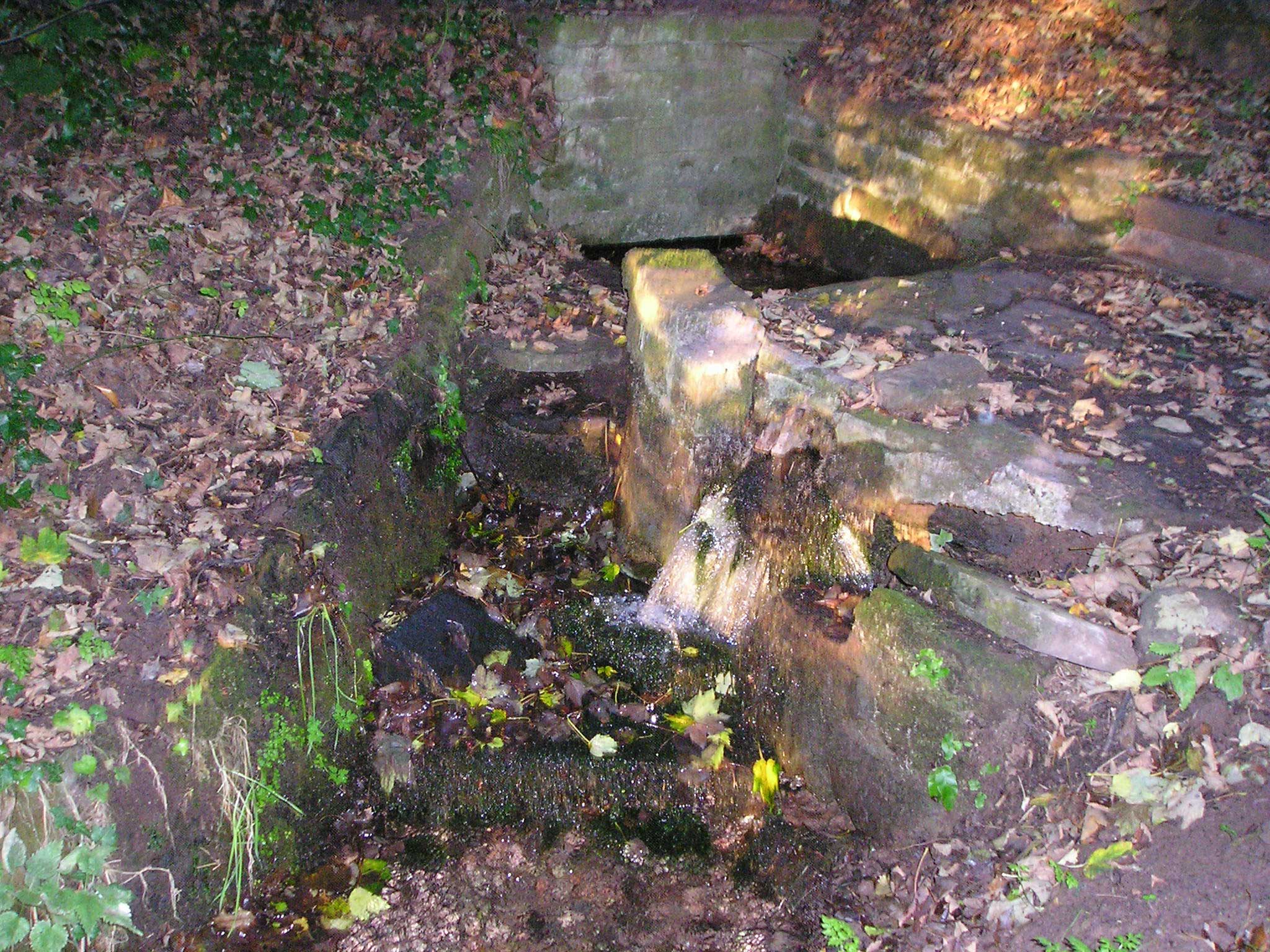 Milburga also stretched out her hands over a field of barley that men had just planted, causing it to grow instantly and she told them to harvest it that evening:

The miracle of the barley is reputed to have happened on the 23rd of February. That full-grown barley was harvested at planting time would have made the story even more miraculous. That is why this day was designated as her day:

Milburga was also able to command geese not to eat the seed planted in her priory’s fields:

“She tells wild geese (aucas indomitas) not to feed in her fields at Stochas. They obey her command and in subsequent years alight in her fields but feed elsewhere.” [7]Wakeford, Mark Reginald. The British church and Anglo-Saxon expansion : the evidence of Saints cults. Durham theses, Durham University. 1998. Available at Durham E-Theses Online: http://etheses.dur.ac.uk/991/

In her association with springs of water, growth of crops and command of wild birds, it’s felt that stories of Milburga (who was a real person) probably became intertwined with those of some pre-Christian goddess who dwelt in the area:

“St Milburga’s Day is the 23rd of February and thus falls at the period of ‘Lent-tillin’ or spring wheat-sowing. It is very evident from these traditions, both ancient and modern, that in the minds of the still half-heathen people among whom she dwelt, she took the place of one of their ancient rustic goddesses, coming forth in the morning sunlight, and swiftly journeying in the spring time among the hills and valleys, making the waters flow and the corn spring up as she went. “ [8]Bume, Charlotte Sophia. Shropshire Folk-lore: A Sheaf of Gleanings. London: Trubner & Co. 1883. P. 419.

In the late 1100s, Canon David de Aqua designated revenue from a piece of land in Moreton, Hertfordshire, to be used to give out simnel cake to clergy as treats on St Milburga’s Day:

“In 1174 x 1180, David de Aqua, a canon of Hereford, granted in frankalmoign to the church of the Blessed Virgin Mary and St Athebert (sic) of Hereford, with the consent of the bishop, all the tithes of a certain piece of land which the grantor had bought from Robert de Chandos to augment his prebend. The grant was made so that simnel cakes could be made annually on the feast of the Blessed Milburga, for distribution to the canons and vicars of the cathedral and priests of Hereford.” [9]Barret, Philip. The College of Vicars Choral. In: Hereford Cathedral: A History. G.E. Alymer and John Eric Tiller, editors. London: The Hambledon Press. 2000. Page 441.