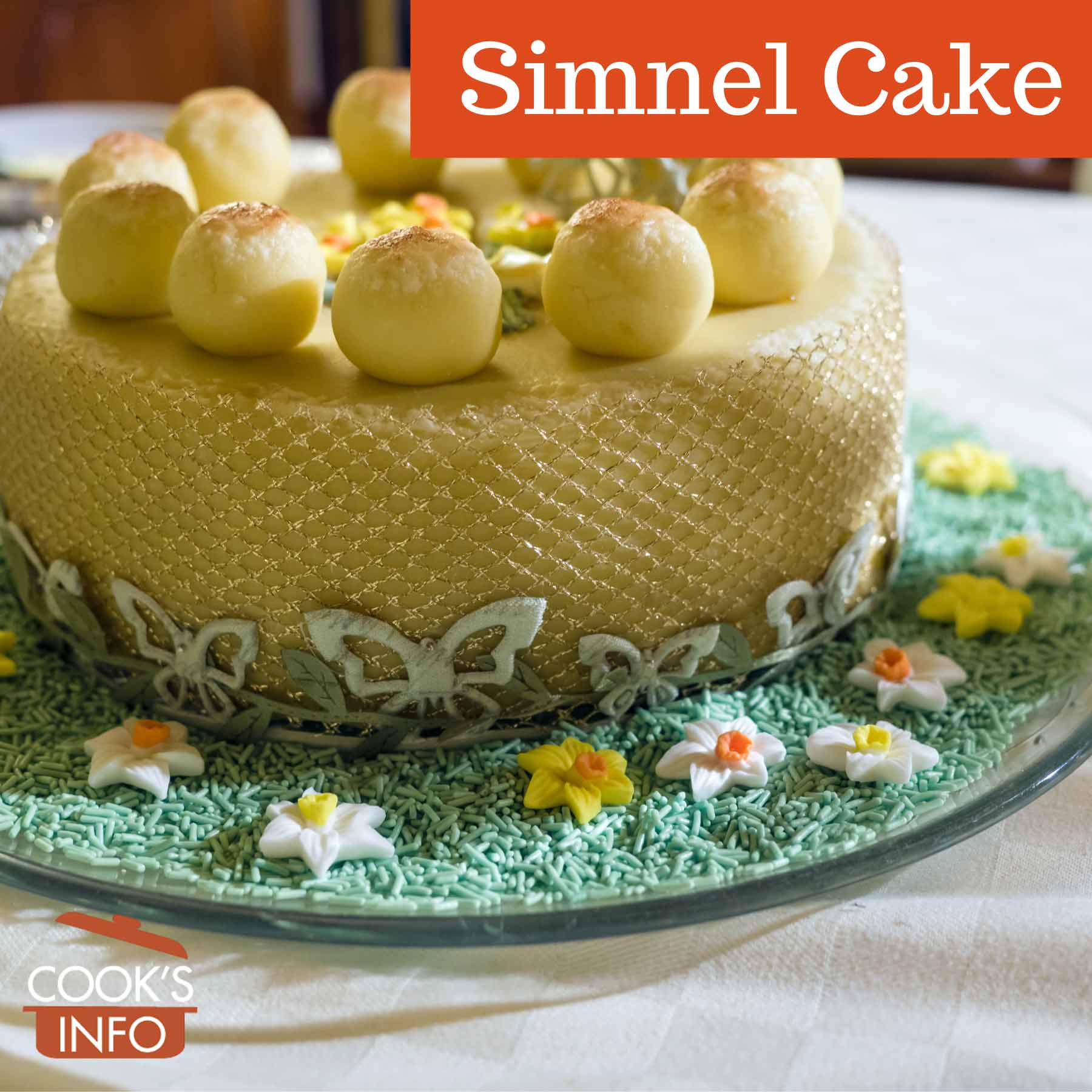 A simnel cake is like a plum pudding inside a crust.

The inside part is made from flour, spices, dried fruit and candied peel.

Simnel Cakes are often decorated. Flowers are a typical adornment. In the past, it was fresh flowers; nowadays it will be candied flowers or flowers made from icing.

Some versions have a crust made from a creamed batter, others from a yeast-dough. Yeast dough ones tend to have saffron in them, making them yellowish. Other versions have the inside part coated with marzipan, baked, then iced.

There are several regional variations in England:

The most well-known version is perhaps the Shrewsbury version. 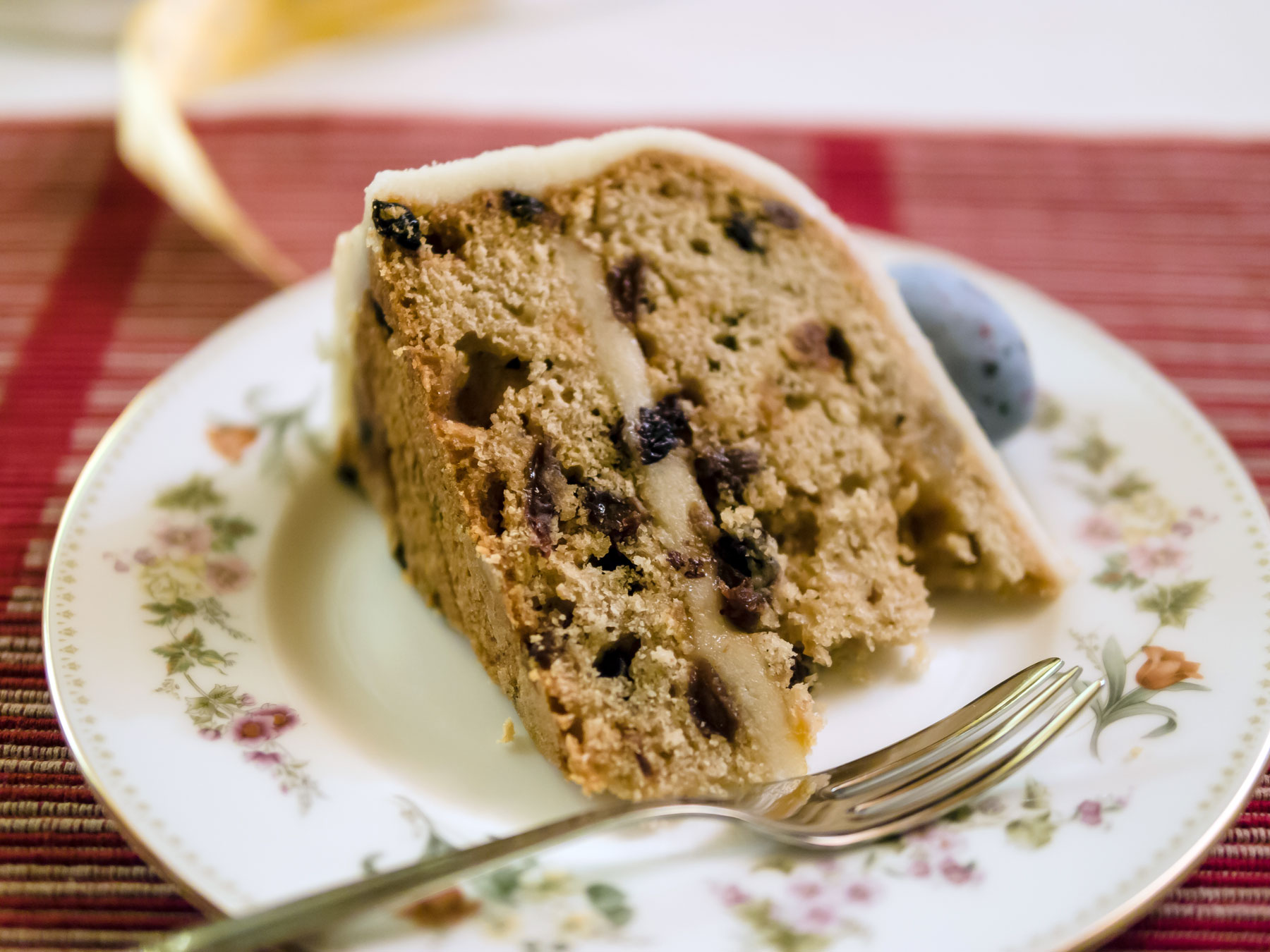 Simnel cakes have evolved. They started off as small biscuity-type cakes, unrisen, with good quality flour, honey anise and water,

In the late 1100s, Canon David de Aqua left land in Moreton, Hertfordshire, in his will to endow giving out simnel cakes on St Milburga’s Day (23 February.)

In the time of Henry III, a simnel cake was a small cake, twice baked. Bakers were allowed to charge a farthing for it, not only because they used better flour, but because of the extra work involved in cooking them twice. The laws referred to them in Latin as “bis coctus” (meaning “twice cooked”.) They ended up with a crisp, shiny surface. They sometimes had a pattern stamped on them, such as the figure of Jesus or Mary.

The cake was wrapped in a cloth, like a pudding, and simmered in water, then removed from the cloth, brushed with beaten egg, then baked. Over time, it came to be decorated for Easter, iced with marzipan, and decorated with 11 balls of marzipan, 1 for each apostle (not 12 — minus 1 for Judas, of course.) The crust was sometimes made in the past from flour and saffron-coloured water particularly in Shropshire (see Literature & Lore below).

Simnel cakes were traditionally given as presents to mothers on Mothering Sunday (aka Laetere Sunday or Midlent Sunday in the Roman Catholic Church), which fell during Lent. Whether the mothers ate them then or saved them till Lent was over seems to have been up to the mother. The cakes would have kept till Easter, because after boiling and baking, the crust on them gets very hard, helping to give the cakes a long shelf life. But Mothering Sunday was also known as Refreshment Sunday in the Anglican Church, when the rules of Lent were relaxed for that one day.

In her 1883 book “Shropshire Folk-lore” Charlotte Sophia Bume recounted a folk history explanation for the origin of simnel cakes:

“These cakes are still made and displayed for sale by the confectioners of Shrewsbury every year… They are very rich plum-cakes, encased in a crust of flour-and-water, coloured with saffron. They are made round and rather flat, with a curiously-scalloped upper edge, and are first boiled for several hours and then brushed over with egg and baked. Simnels are made in other towns besides Shrewsbury — notably, Bury in Lancashire, but the curious saffron crust and the singular manner of preparing the cake seem to be peculiar to our county.

‘That simnels possess a high antiquity’ is beyond all doubt, says Miss Jackson; ‘that they were of widespread use is equally so — frequent mention of them being made by early writers; for instance, we find in The Lay of Havelok the Dane [11 778-780] written about AD 1280:

Guessing etymologists have suggested that simnels were so called because they may have been invented by the baker who was father to Lambert Simnel but this worthy, like the ‘Bodkin Johnnies’ and ‘Young Chips’ of the present day, obviously obtained his name as a cognomen alluding to the family trade for the word simnel (siminellus or simenellus in medieval Latin) seems to have been common in the middle ages. It is now known to be really derived from simila, or fine flour, and to have been originally applied to fine wheaten loaves. The legendary folk etymology of the name is well told in the Book of Days (p. 336 ed. 1881).

Long ago there lived an honest old couple boasting the names of Simon and Nelly but their surnames are not known. It was their custom at Easter to gather their children about them, and thus meet together once a year under the old homestead. The fasting season of Lent was just ending but they had still left some of the unleavened dough which from time to time had been converted into dough during the forty days. Nelly was a careful woman, and it grieved her to waste anything, so she suggested that they should use the remains of the Lenten dough for the basis of a cake to regale the assembled family. Simon readily agreed to the proposal, and further reminded his partner that there were still some remains of their Christmas plum pudding hoarded up in the cupboard, and that this might form the interior and be an agreeable surprise to the young people when they had made their way through the less tasty crust. So far all things went on harmoniously; but when the cake was made, a subject of violent discord arose.

Sim insisted that it should be boiled, while Nell no less obstinately contended that it should be baked. The dispute ran from words to blows, for Nell, not choosing to let her province in the household be interfered with, jumped up and threw the stool she was sitting on at Sim, who, on his part, seized the besom and applied it with right good will to the head and shoulders of his spouse. She now seized the broom, and the battle became so warm that it might have had a very serious result, had not Nell proposed as a compromise that the cake should be boiled first and afterwards baked. This Sim agreed to, for he had no wish for further acquaintance with the heavy end of the broom.

Accordingly the big pot was set on the fire, and the stool broken up and thrown on to boil it, while the besom and broom furnished fuel for the oven. Some eggs which had been broken in the scuffle were used to coat the outside of the pudding when boiled, which gave it the shining gloss it possesses as a cake. This new and remarkable production in the art of confectionery became known by the name of the cake of Simon and Nelly; but soon only the first half of each name alone was preserved and joined together and it has ever since been known as the cake of Sim Nel or Simnel.

This elaborate story has been quoted and circulated on the confectioners’ handbills in Shrewsbury (I have one before me as I write) so that probably very few Salopians could now tell it from a traditional source, though there can be no doubt that it is in the main a genuine folk tale, and not mere base coin from the mint of some modern wit. It is briefly told in Hulbert’s History and Description of Salop 1838 (p. xxx) where also occurs the following passage, which I place here, though it seems to refer to a custom practised on Easter Monday. As in some of our neighbouring counties, there exists a cruel custom of throwing sticks at a live cock on Easter Monday, so in Shropshire the juvenile portion among the middle classes have a practice of throwing at a simnel placed on a short pole or stick fixed in the earth on which the cake is balanced. The amusement is, to throw from a certain distance a ball, an apple, or a stick, and those who succeed in striking off the simnel are entitled to a bite. This seems to connect itself with the Easter customs of playing ball throwing eggs and so forth of which we shall have more to say in the next chapter.” [1]Bume, Charlotte Sophia. Shropshire Folk-lore: A Sheaf of Gleanings. London: Trubner & Co. 1883. Pp. 325-327.

Simnel Cake was not completely unknown in America. In the c. 1905 Los Angeles Times Cook Book No. 2, page 54, a Gertrude Williams of 525 Cypress Avenue, Pasadena, California, kindly donated to readers her recipe for it:

SIMNEL CAKE. Five pounds flour, two pounds currants, three pounds sultana raisins, one and one-half pounds butter, two pounds sugar (brown or white,) three-quarters pound mixed almonds, one-half ounce cinnamon, a little mace, one-half ounce soda, seven eggs, one-half pound candied lemon peel. Mix flour and rub butter well first, then add spice and sugar, then fruit. Let it stand and next morning add the eggs, milk and soda, just a little milk, about a gill; when nearly baked paint them over with two eggs, a little sugar and milk, also a little molasses; then put them into oven again (a cool oven is required.) This makes two or more large cakes. This cake must be rolled about two inches thick, made round, higher in the middle and notched around edges.

“Simnel” meant a “fine flour”. The word came from the Latin “simila“, a desirable flour that was finely ground from wheat (what we would now, of course, consider everyday flour, though still a bit coarser than ours owing to more primitive equipment) via the old French word, sinenel. Our modern word “semolina” comes from the same Latin word.

Simnel bread was white bread, sold throughout the year.

The name of these cakes has nothing to do with Lambert Simnel (c. 1477 – c. 1534), pretender to the title of Edward VI, who ended his career working in the royal kitchens.