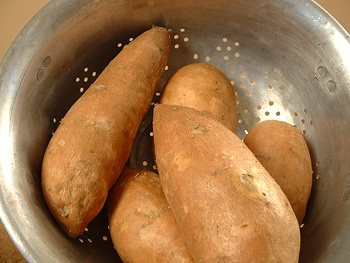 Sweet potatoes are the storage roots of a plant that is part of the morning glory family.

Sweet potatoes, however, are shaped like potatoes, and are about the same size, but instead of rounded ends, their ends will often be slightly or very tapered. The skin is pretty much tan-coloured, though sometimes this will range to pinkish or coppery. Some will have white flesh inside, some will have purply flesh, but most often the ones that have yellow or orange flesh are preferred as this indicates the presence of carotene (which the body can convert to vitamin A as needed.) sweet potatoes thrive in hot, moist climates.

You can grow potatoes by cutting out and planting a portion that has an “eye” (bud) in it. Sweet potatoes never produce “eyes.” They will sprout if you put one in a glass of water, but won’t do much of anything other than moulder away if you bury one in the ground. 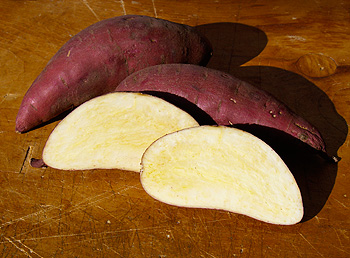 Historically, people in the southern United States have preferred varieties which are “moist-fleshed” and orange inside, which they often call (erroneously) call yams. In the Northern States, Canada and the UK, people have preferred the paler yellow “dry-flesh” ones. This may have been largely owing to which varieties grew better where. The lighter-fleshed ones do better in shorter growing seasons. [1]”Generally speaking, the northern consumers prefer the so-called “dry-fleshed” type of sweet potato, such as Big Stem Jersey and Little Stem Jersey, while the southerners prefer the “moist-fleshed” type, such as the Porto Rico and Nancy Hall varieties. A strange fact about these two types of sweet potato is that the “dry-fleshed” ones have more water in them than the “moist-fleshed” ones do!” — Boswell, Victor R. “Sweet Potato, Another American” in Our Vegetable Travellers. National Geographic Magazine. 1949. Reprinted February 2000 by Aggie Horticulture of Texas A&M University. [2]Of the large number of varieties of the sweet potato there are not more than ten that are now of great commercial importance in the United States. For the markets that require a dry, mealy-fleshed potato those varieties belonging to the Jersey group are suitable. For the Southern trade and where a moist-fleshed potato is desired those commonly designated as yams are in demand. Among the Jerseys that are extensively grown are the Big-Stem Jersey, the Yellow Jersey, and the Red Jersey. The principal varieties of the yam group are the Southern Queen, the Pumpkin Yam, the Georgia, the Florida, and the Red Bermuda. Of the varieties mentioned there are a large number of special strains known under many local names. In the selection of varieties for home use one must be governed largely by locality. As a rule those of the Jersey group will thrive farther north than those of the so-called yam types.” — Grubb, Eugene H. and W.S. Guilford. “The Sweet Potato. Part 3″. In: The Potato: A Compilation of Information from Every Available Source. Doubleday, Page & Company. 1912. [3]”In North America, sweet potato is commercially grown in southern states of USA, particularly North Carolina and Louisiana….In Canada, sweet potato is grown commercially in Ontario, Quebec and in recent years is making in-roads in Maritime farms and gardens. Depending upon the sweet potato variety, of which there are about 400, its flesh may be white, yellow or orange and its thin skin may be white, yellow, orange, red or purple. Sometimes this root vegetable will be shaped like a potato, being short and blocky with rounded ends, while other times it will be longer with tapered ends. Though orange flesh/orange skin varieties are most common in [the] Maritimes, purple skin/orange flesh and white skin/white flesh varieties are becoming available through regional grocery retailers and farm markets.” — Canada: Growing sweet potatoes in the Maritimes. Halifax, Nova Scotia. Atlantic Farm focus Magazine. 8 June 2007. Consumer preference changed somewhat in the late 1900s as the orange-fleshed ones became widely available owing to mass shipping from the American south, and to growing trials in northern areas to develop orange-fleshed ones suitable for the growing seasons there.

In the southern states, though, sweet potatoes are also used as livestock feed, something that northerners wouldn’t do owing to the premium they still fetch at markets.

Sweet potatoes are usually cured after harvesting. The curing involves being stored for about 5 days at 30 C (85 F); this dries them out a bit, to preserve their storage life, and converts some of the starch to sugar, making them sweeter. Sweet potatoes taste best when allowed to age for at least a month after harvesting before use (as sugar starts to form immediately afterward.)

Sweet potatoes are still generally regarded as a festive food for holidays, though sweet potato growers are doing their best to make consumers think of them as do people in the southern United States, for whom they are more of an everyday staple.

When buying sweet potatoes, don’t pay much attention to the appearance of the skin. Don’t buy any, though, that have blotchy white areas; they have probably been damaged and are decaying. To pick a good one, heft it in your hand, and see that it feels heavy for its size.

To make peeling them easier, you can plunge them in boiling water for a minute, then into cold water. To keep peeled raw sweet potatoes from browning, place them in cold water mixed with a bit of lemon juice until you need them, then drain.

Yams (or in pies and baking, cooked pumpkin or squash)

A sweet potato has 3 to 6% sugar content, which increases during the early stages of cooking as enzymes break its starch down into glucose components. It provides more calories, minerals and vitamins, but less protein, than a white potato. Yellow and orange-fleshed sweet potatoes are rich in carotene (which your body converts to Vitamin A as needed.)

Sweet potatoes contain apparently more vitamin A than any other vegetable.

Do not store uncooked sweet potatoes in the refrigerator, or a hard core can form inside them. If you have a dark, ventilated space that is about 13 C (55 F), you can store them for months.

Freezing: Wash. Boil, bake, steam or microwave until just about tender. Let stand until cool. Peel. Then mash, slice, or chop into chunks. Package and freeze. Optional: drizzle and toss cooked sweet potato with a small amount of lemon juice before freezing to prevent any darkening.

Canning: Sweet potatoes are a low-acid food and therefore must be pressure-canned; there is no other canning method alternative. See Pressure canning sweet potatoes.

Columbus found the natives of Central America cultivating sweet potatoes. Spanish explorers brought the sweet potato to Spain, where it was being grown by the middle of the 1500s, as well as to tropical areas such as the Philippines, India and China.

The natives of Yucatan and Honduras told the Spanish that the sweet potatoes were called “batatas.” It’s not too great a stretch of the imagination to see how the word “potatoes came about from that.

This web site generates income from affiliated links and ads at no cost to you to fund continued research · Information on this site is Copyright © 2022· Feel free to cite correctly, but copying whole pages for your website is content theft and will be DCMA'd.
Tagged With: American Food, Potatoes, Sweet Potatoes, Yams