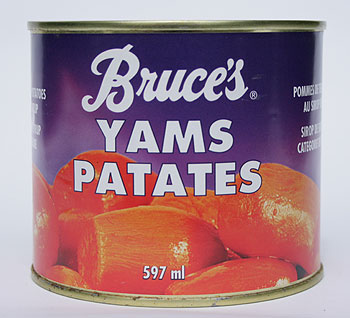 Yams are very long tubers (up to several feet long.) They are cylindrical-shaped, with rough, brown scaly skin that looks a bit like tree bark.

Yams are tropical roots native to Africa, but now grown around the world. They will not grow in temperate climates such as North America and the UK. If you see something being called a “yam” being advertised as having been grown in the U.S., you can be certain that what you are looking at is not a yam. Michigan State University Extension clarifies that “Yams are not grown in the United States.” [1]Sirrine, Rob. November is Sweet Potato Awareness month. Michigan State University Extension. 23 November 2015. Accessed February 2021 at https://www.canr.msu.edu/news/november_is_sweet_potato_awareness_month

The plant is a vine with climbing stems, leaves and flowers. There are more than 150 varieties of yams, varying inside colour from white to purplish to brownish; the skin colour may be dark brown or off-white.

The roots need 12 months to mature before they are ready to harvest.

In the UK and in North America, unless the yam you are buying either is canned or is being sold as has just been described, what you buying is a sweet potato mislabelled as a yam. Sweet potatoes look like potatoes, in size and skin, except they have tapered ends.

Most varieties of yams are too large to sell whole in supermarkets. They will be sold in chunks weighing a pound or two each, sealed in plastic. The flesh should be firm, and any skin on the chunks you are buying should be tight and free of wrinkles. Canned yams are equally acceptable.

Most yams sold in the United States and Canada imported from the Caribbean.

Wash and peel yams as you would potatoes, and prepare and use them as you would sweet potatoes for boiling, mashing, braising, grilling, roasting, baking or frying.

When cooked, the flesh may be moist or dry, fine or coarse or grainy. Some varieties are sweeter than others; some are bitter.

Unlike sweet potatoes, which are the champion veg for vitamin A, yams do no contain any vitamin A.

Yams may be stored in a cool, dark, dry location for up to two weeks. Do not store them in the refrigerator.

Yams originated in Asia, and came to Africa around the 1st century AD, and were brought to the Caribbean with the slave trade.

This web site generates income from affiliated links and ads at no cost to you to fund continued research · Information on this site is Copyright © 2022· Feel free to cite correctly, but copying whole pages for your website is content theft and will be DCMA'd.
Tagged With: American Food, Yams