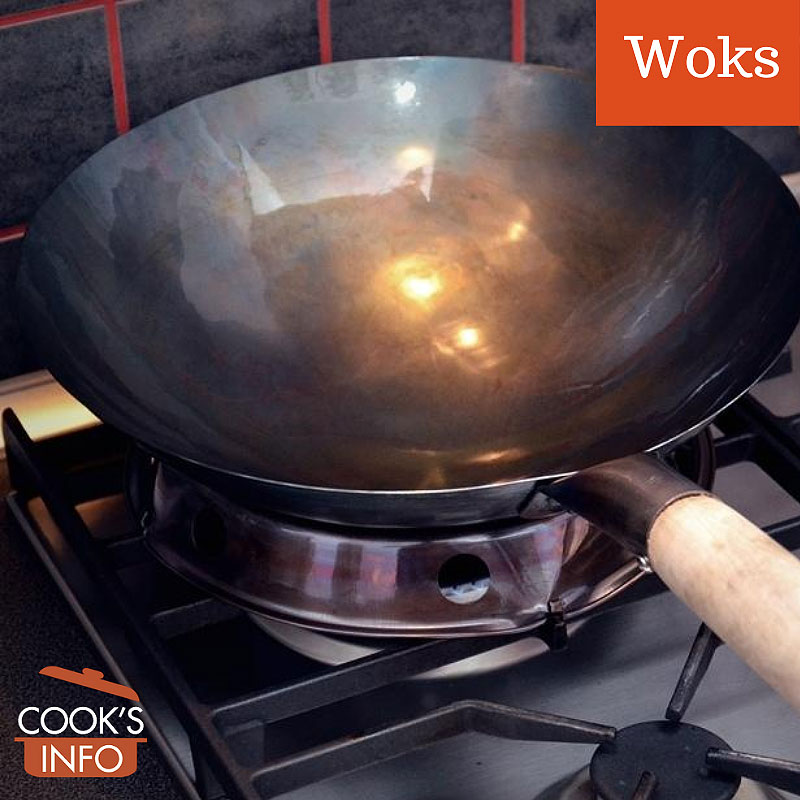 A wok is an all-purpose pan. It can be used for braising, deep frying, frying, roasting, stir frying, steaming and stewing.

Though used throughout Asia, woks are best known for their role in Chinese cooking. In northern China, a wok is more likely to be used for braising or stewing than for a quick stir-fry.

A wok is more like a small cauldron than it is a frying pan. It has a round bottom, and is shaped like a bowl with sloping sides.

There are two types of woks. One has handles on both sides, the other has a single long handle on one side. The double-handled one is used in southern China (e.g. in Cantonese cooking); the other one is traditionally used in the north. The single handled one can be easier to toss things about in.

You can buy electric ones that have a flat bottom, or flat-bottomed ones to go on hot plates. Some wok sets include just the wok; other sets include a lid plus utensils.

Woks are made from metal, anything from aluminum to stainless steel. Many fans in fact prefer carbon steel. It heats quickly, cools quickly when taken off the heat, and is inexpensive to boot. When heated for the first time, carbon steel ones will start to change colour from shiny all over to mottled black areas. Home users complain, though, that while carbon steel woks will be hot enough to burn things on the very bottom, they won’t do anything but warm things on the sides. This isn’t a problem in Chinese restaurants, where their burners will have lots of flame that go up the sides of the wok. Carbon steel ones can be particularly unsatisfying on electric stoves. 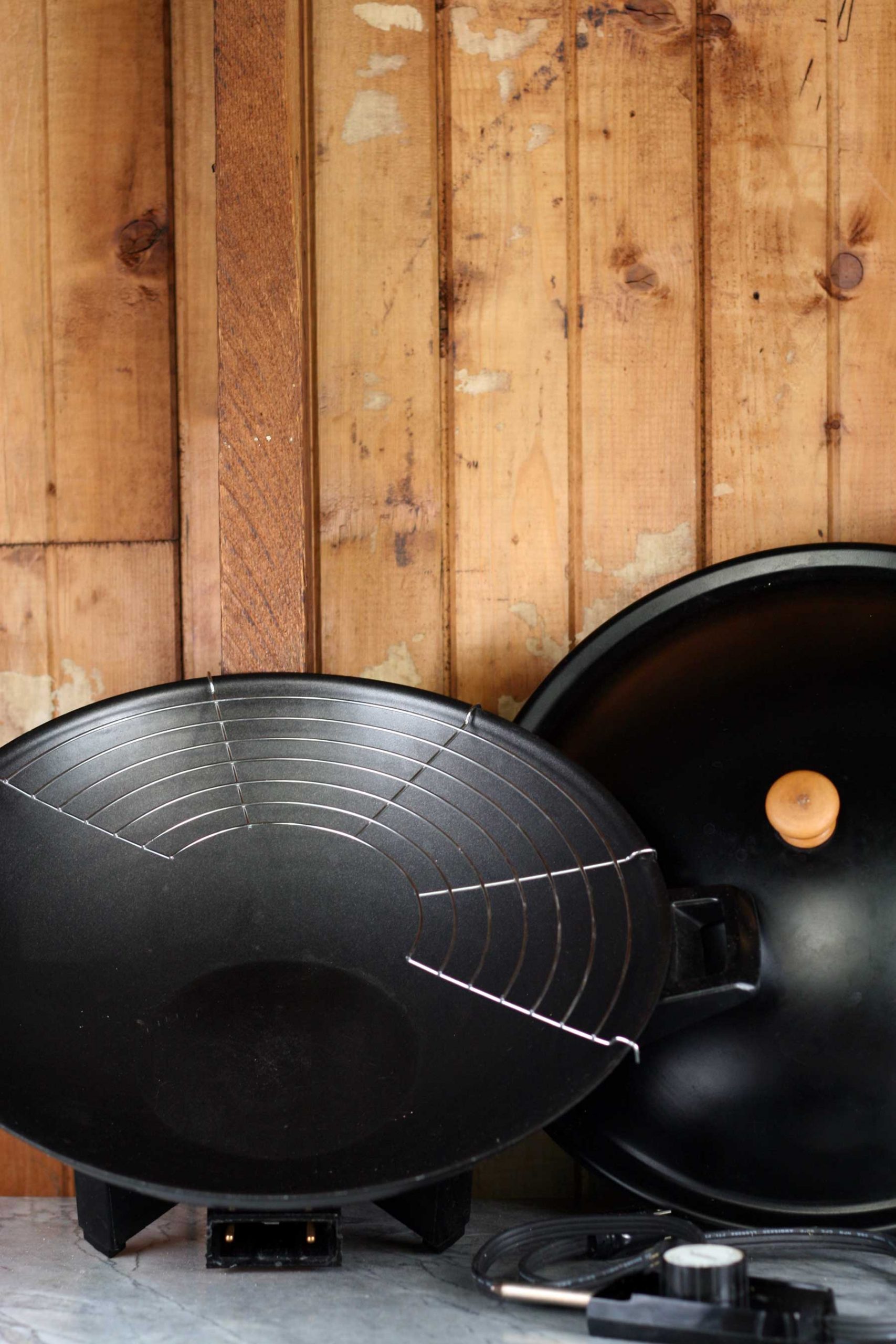 To stir fry in a wok properly, the temperature needs to be able to recover right away the instant the food hits the pan. Restaurants will have burners that are 20 to 50,000 BTU; some restaurants will even have special wok burners that are 250,000 BTU. Standard home stove-top burners, however, deliver only 6,000 to 11,000 BTU, sufficient for only very small quantities of stir frying at a time, or the temperature will drop when you add food, and take too long to recover to allow you to achieve perfect stir fry results. Given this, you can really only stir fry a little at a time at home if you want to achieve good stir fry, unless you buy a whole new stove with a dedicated wok burner. If you’re buying a stove that has a special wok burner on it, pay attention to how many BTUs that burner has. These burners are sometimes called “high output burners”; they come with “wok rings” that you can swap in over the burner. Some people say as a guideline that if you want to stir fry ¾ pound (350 g) of chicken at once, you need at least 15 to 18 BTUs. 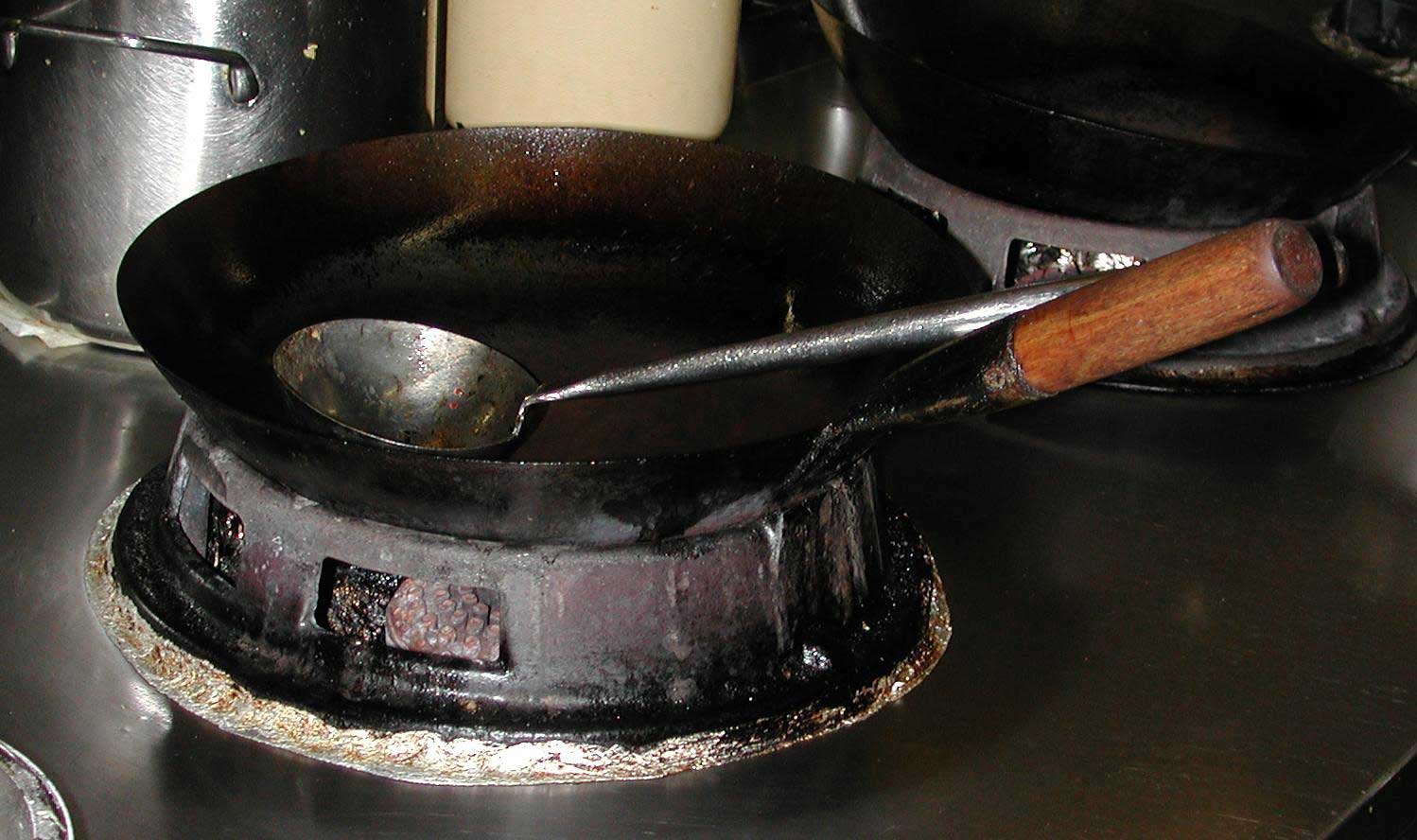 Some people suggest that cast iron woks help somewhat at home. While carbon steel retains little heat, cast iron woks can heat up and retain heat, helping to even out the temperature when food is added. Some cast iron ones, such as that made by Le Creuset, come pretempered, with a matte finish already inside them. You can also get “raw” ones that you have to temper.

Woks are meant to stand up to and be used with extremely high heat. Cantonese cooks talk about “fo hao”, meaning “fire power.” A sign that your heat wasn’t high enough for the food is lots of liquid at the bottom of your wok after cooking — this means that the food was steamed and sweated instead of fried.

Pros cherish a well-seasoned wok, whose inside has become shiny and black. A well-seasoned one will be practically non-stick with just a little oil used each time — the more seasoned a wok is, the less oil is needed to cook with. This level of seasoning, however, only comes with a lot of use.

To start seasoning a wok, wash it and wipe dry. Add a few tablespoons of oil, and some chopped onion. Rub both over the surface of the wok. Heat the wok on medium heat for 5 minutes, let cool a bit, then rinse the pan under hot water and wipe dry with paper towel.

If you have purchased a new wok and it has a coating on it that won’t seem to come off, boil water in the wok until the coating dissolves. Then discard the water, and use soap and a scouring pad.

To cook in a wok, heat the wok first before adding your oil. Heat it until drops of water will sizzle and evaporate right away. Then add your oil.

To use a wok as a steamer, you set a bamboo steamer basket inside the wok.

Never clean a wok with soap or a pad, and never scrub it clean, unless you intend to start seasoning it from scratch all over again, or need to remove rust — in which case you will need to re-season it. After washing a wok, wipe it dry. If the burner is still warm, place it back on the burner to dry it. To store, wipe the inside of the wok with a cloth that has a bit of vegetable oil on it. If you don’t use your wok often, place it in a large bag to keep dust off.

A wok does not make a good substitute for a paella pan. 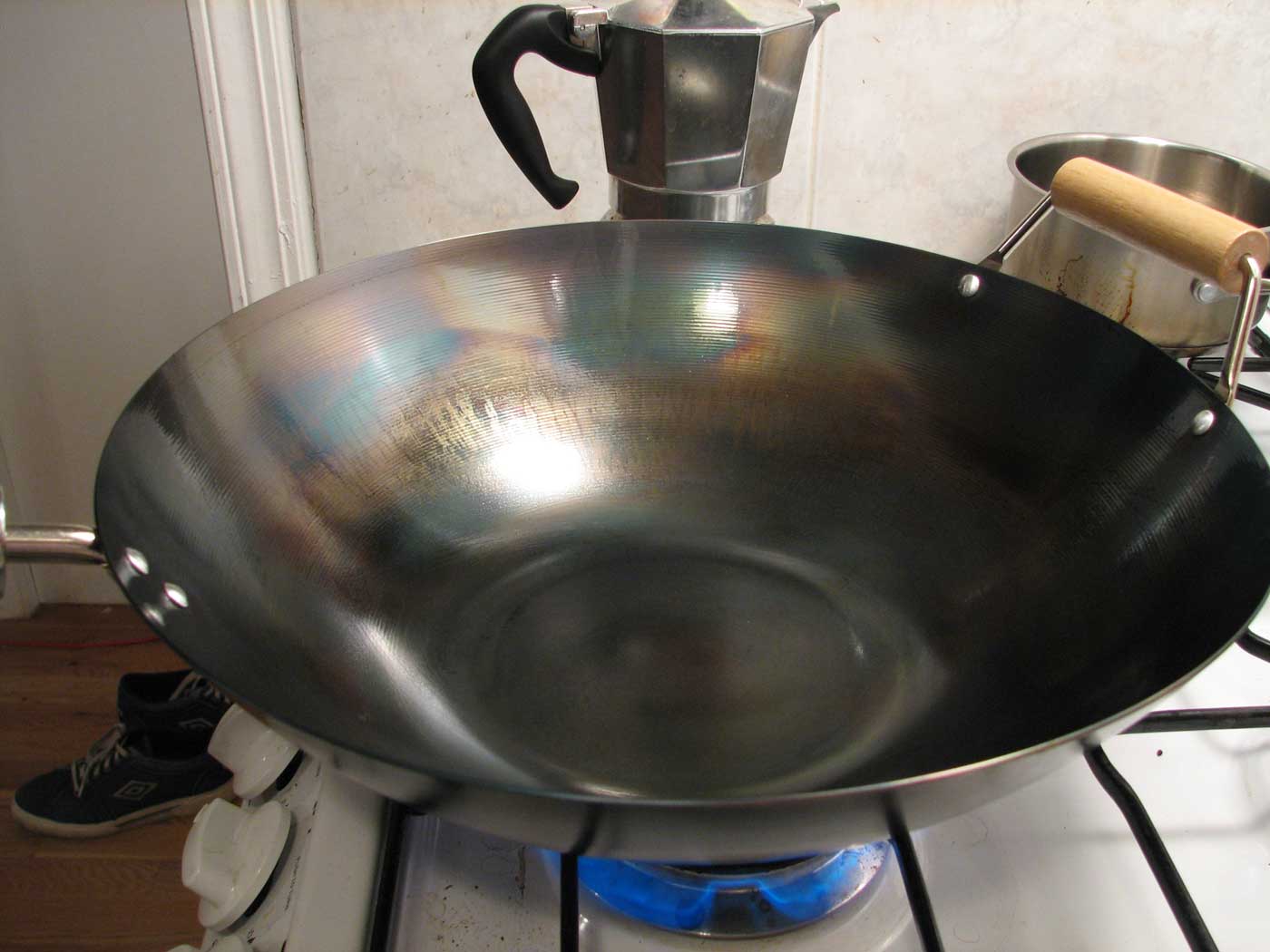 This web site generates income from affiliated links and ads at no cost to you to fund continued research · Information on this site is Copyright © 2022· Feel free to cite correctly, but copying whole pages for your website is content theft and will be DCMA'd.
Tagged With: Chinese Food, Cookware, Pans