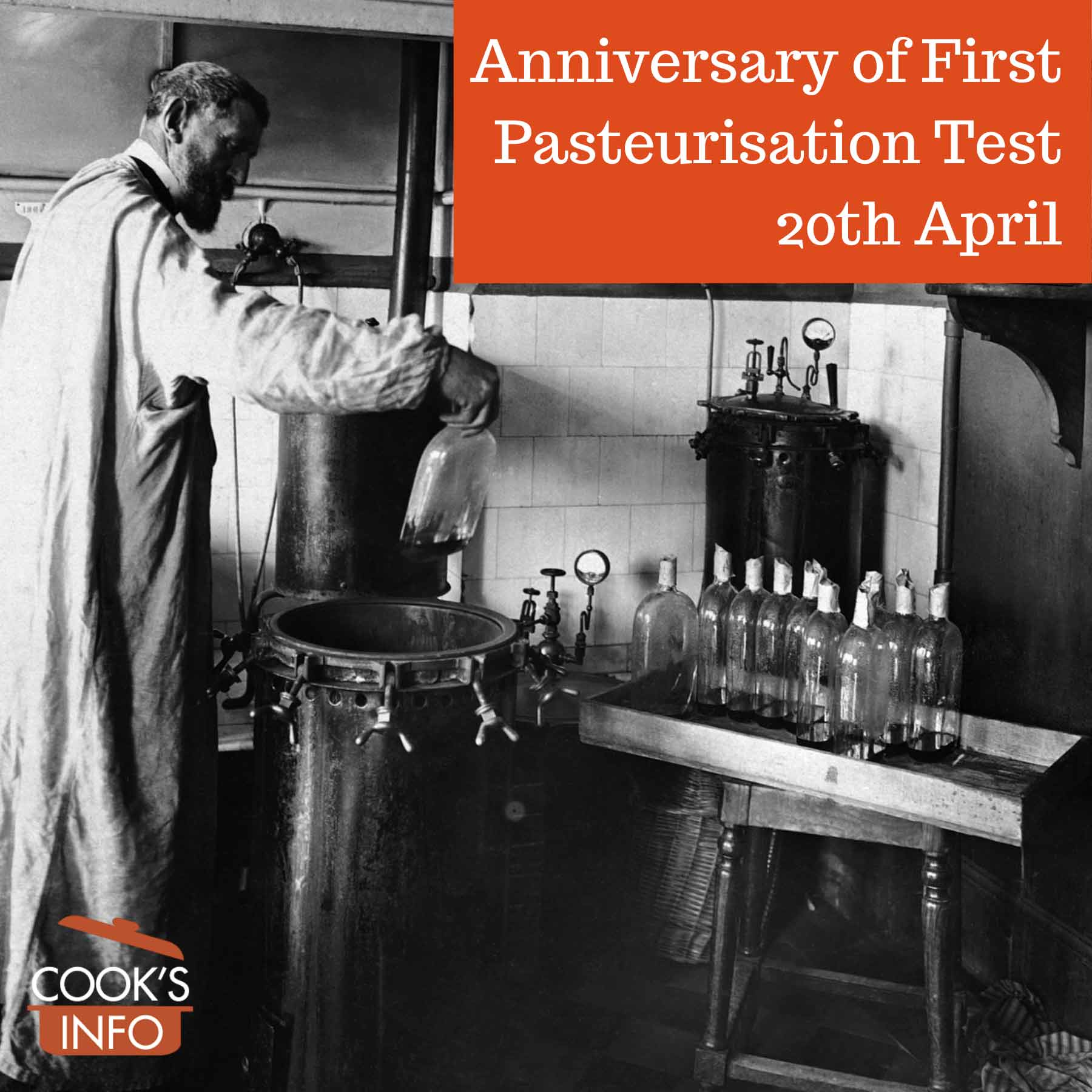 The 20th of April is the anniversary of the first pasteurization test in 1862. It proved that low-temperatures applied to organic substances could prevent spoilage by inactivating microorganisms that would otherwise cause deterioration.

The test was performed by Louis Pasteur (27 December 1822 – 28 September 1895), along with Claude Bernard (12 July 1813 – 10 February 1878) . Of the two, Pasteur is now the more remembered, partly perhaps because his work has since had more visible, practical outcomes. [1]”Pasteur is mainly celebrated for the practical outcomes of his work.” — Sinding, Christiane. “Claude Bernard and Louis Pasteur: Contrasting Images through Public Commemorations.” Osiris, vol. 14, [Saint Catherines Press, The University of Chicago Press, The History of Science Society], 1999, pp. 61–85, http://www.jstor.org/stable/301961. [2] Claude Bernard is also now controversial owing to his practice of vivisection, even practising it on the family pet dog, causing his wife and children to walk out on him forever. Pasteur also was the one who correctly recognized what was happening in the 1862 experiment.

Pasteur studied at the École Normale Supérieure in Paris until 1847. In 1848, he worked at the University of Strasbourg and in 1854 at the University of Lille. In 1857, he returned to the École Normale Supérieure in Paris as the director of scientific studies. There he worked on studies to develop the view that fermentation was caused by microorganisms.

Pasteur and Bertrand approached the 1862 experiment with different mindsets and expecting different things:

“The two scientists were, as is well known, both interested in the phenomena of fermentation, and engaged in experiments to find out its nature and causation and to demolish the theory of spontaneous generation. Their attitude to the question was, however, not the same. Bernard believed that the process of fermentation was purely a physico-chemical one, while Pasteur maintained that it was a form of life and did not occur without the presence of some living organism however minute.” [3]The Fermentation of Pasteur and Claude Bernard. London, England: The Lancet. 19 June 1937. Page 1477. DOI: https://doi.org/10.1016/S0140-6736(00)98121-2

Others before Pasteur, such as Nicholas Appert, had worked at getting higher levels of sterility in food at much higher temperatures for longer durations (and previous work had also been done by Lazzaro Spallanzani (1729–1799)). What Pasteur wanted to do was experiment with gentler heat and shorter intervals that would be enough to eliminate or slow spoilage, while preserving more of the original nature of the item being treated.

“Until now the liquids he had used, however alterable they were, had been brought up to boiling point. Was there not some new and decisive experiment to make?” [4]Vallery-Radot René. The Life of Pasteur. Translated by R.L. Devonshire, London, England: Archibald Constable & Co., 1902. Pp 135-136.

For this experiment, Pasteur and Bertrand sealed dogs’ blood and dogs urine in glass phials and heated the phials to 30 C (86 F). They choose these two substances as they deemed blood and urine “highly putrescible”. [5]Vallery-Radot René. The Life of Pasteur. Translated by R.L. Devonshire, London, England: Archibald Constable & Co., 1902. Pp 135-136.

“Claude Bernard, joining in these experiments of Pasteur’s, himself took some blood from a dog. This blood was sealed up in a glass phial, with every condition of purity, and the phial remained in a stove constantly heated up to 30° C.” [6]Vallery-Radot René. The Life of Pasteur. Translated by R.L. Devonshire, London, England: Archibald Constable & Co., 1902. Pp 135-136.

The phials were kept under these sealed and constantly heated conditions in an oven for six weeks, and then opened at a meeting of the French Academy of Sciences on the 20th of April, 1862. No “putrefaction” had occurred…

Pasteur drew the conclusion that it was microorganisms (which he called “germs”) which caused fermentation / putrefaction. The theory that it was germs causing spoilage had been hypothesized before. Pasteur’s work tipped the scales in convincing scientific communities that it was correct. Bernard, though, wasn’t happy with that explanation and continued work on his own, hoping to prove it was something else:

“Bernard nevertheless continued his own experiments, hoping always to be able to demonstrate the presence of some soluble ferment which caused the phenomenon of fermentation without the necessary presence of any living thing. .. In a sense both the great men were right. Fermentation is a physico-chemical process as Bernard maintained, and its cause is an enzyme which is provided by a living organism, as Pasteur asserted.” [9]The Fermentation of Pasteur and Claude Bernard. London, England: The Lancet. 19 June 1937. Page 1477. DOI: https://doi.org/10.1016/S0140-6736(00)98121-2

A few years later, in 1864, while on holiday in Arbois, France, Pasteur applied the gentle heating process to wine, heating it to between 50–60 °C (122–140 °F) for a very short period, without affecting the final quality (in his view).

“As he had more particularly endeavoured to remedy the cause of the acidity which often ruins the Jura red or white wines in the wood, the town of Arbois, proud of its celebrated rosy and tawny wines, placed an impromptu laboratory at his disposal during the holidays of 1864; the expenses were all to be covered by the town. This spontaneous offer from a town dear to me for so many reasons,” answered Pasteur to the Mayor and Town Council, “does too much honour to my modest labours, and the way in which it is made covers me with confusion.” He refused it however, fearing that the services he might render should not be proportionate to the generosity of the Council. He preferred to camp out with his curators in an old coffee room at the entrance of the town, and they contented themselves with apparatus of the most primitive description, generally made by some local tinker or shoeing smith. The problem consisted, in Pasteur’s view, in opposing the development of organized ferments or parasitic vegetations, causes of the diseases of wines. After some fruitless endeavours to destroy all vitality in the germs of these parasites, he found that it was sufficient to keep the wine for a few moments at a temperature of 50° C. to 60° C. “I have also ascertained that wine was never altered by that preliminary operation, and as nothing prevents it afterwards from undergoing the gradual action of the oxygen in the air — the only cause, as I think, of its improvement with age — it is evident that this process offers every advantage.” [10]Vallery-Radot René. The Life of Pasteur. Translated by R.L. Devonshire, London, England: Archibald Constable & Co., 1902. Pp 148 – 149.

In 1865, he patented this pasteurization process to combat what was termed “diseases” of wine. Ultimately, though, the practice of pasteurizing wine was never accepted by oenophiles, and the problem of wine turning to vinegar in bottles was solved by the addition of sulfites (which also prevents oxidation).

In 1886, German chemist Franz von Soxhlet suggested applying the pasteurization process to milk. Ultimately, this proved to be the most successful and widespread application of pasteurization, improving not only the storage life of milk, but also the safety of it.

Vallery-Radot, René. The Life of Pasteur

Heroes of Food Safety: Louis Pasteur and the Invention of Pasteurization. 3 September 2019. Accessed October 2021 at https://blog.smartsense.co/louis-pasteur-pasteurization

This web site generates income from affiliated links and ads at no cost to you to fund continued research · Information on this site is Copyright © 2023· Feel free to cite correctly, but copying whole pages for your website is content theft and will be DCMA'd.
Tagged With: Milk