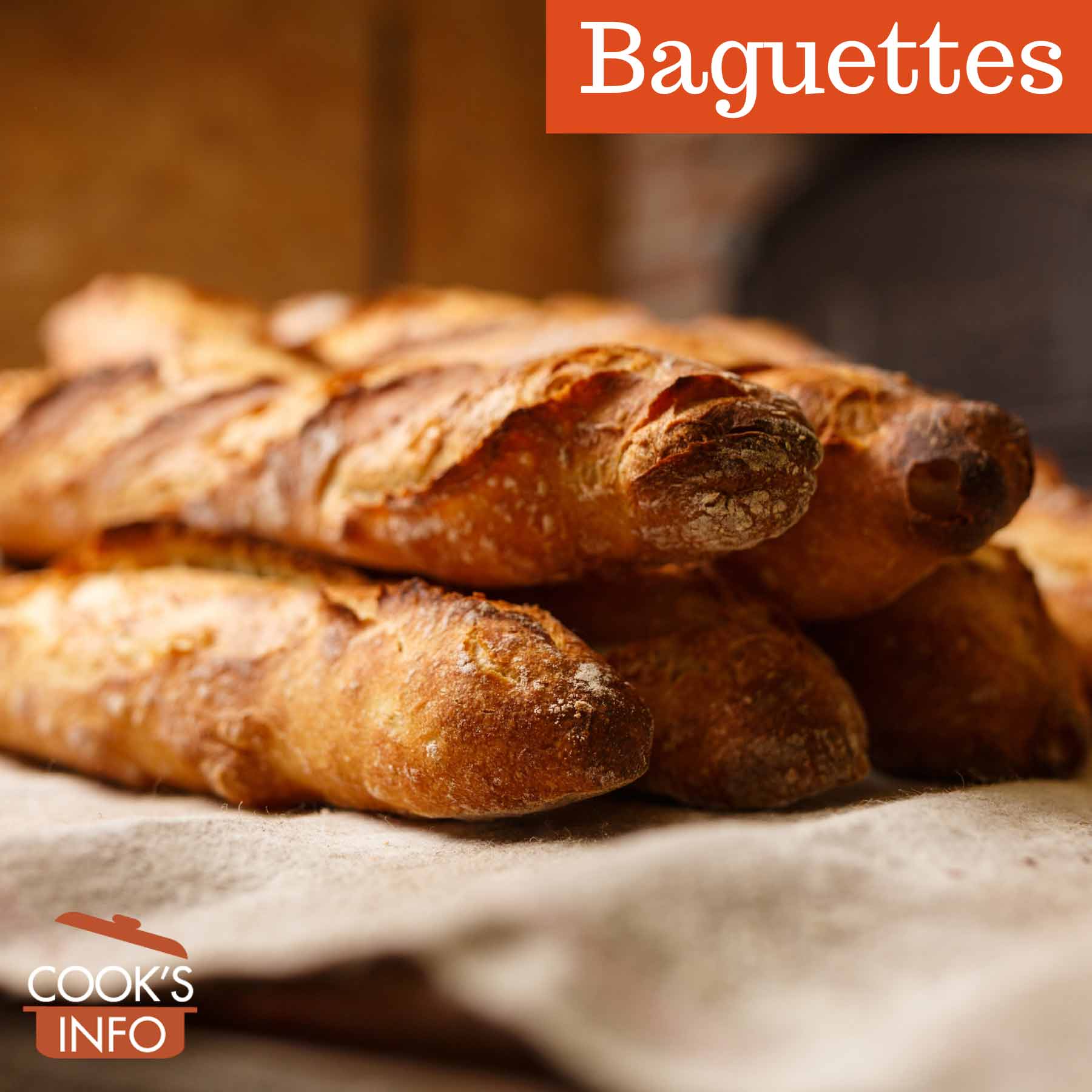 A baguette is a long, relatively thin loaf of crusty bread made in France. Typically the flour used is white wheat flour. They are almost always purchased, rather than made at home.

In the 20th century, they grew to take on iconic status as a universally-recognizable symbol of French food.

It’s really somewhat of a relative newcomer, though, on the French bread scene:

“The image that comes to most of our minds when we think about French bread is a classic one: the Parisian trotting home with a baguette tucked under her arm. Apollonia Poilâne [Ed: of Poilâne bakery] finds that curious. “It’s funny that that has stuck,” she says. “The baguette came about relatively recently.” [1]Bainbridge, Julia. Our Daily Bread. Prior. 13 August 2020. Accessed August 2020 at https://www.prior.club/inspiration/poilane-paris-daily-bread.

Most debates about baguettes between Francophiles quickly descend into acrimony. People love to reminisce about their holidays, and compare bakeries on ‘rue du this’ versus ‘rue du that’. Before too long, someone will wade in and says the best baguettes, not to mention the best spoken French, can actually be found in Geneva. At that point, you know it’s not too long before the American in the room innocently ventures to note that there are some decent baguettes to be had in Manhattan and San Francisco… and then, well, they’re off to the races, with insults and fur flying here and there.

What are baguettes made from?

Baguettes are long, crusty sticks of bread made from flour, salt, water and yeast. The flour is almost always bleached white flour. The bread is also cooked in an oven with some steam to help make a crisp crust (in a home environment cooks often resort to spraying or brushing with water.)

Having no fat in it to make it moist, and no sweetener to help retain moisture, a baguette is only really good to eat the day you bought it.

Small holes on the bottom of a baguette are a clue that it was baked from frozen dough.

If you are making your own baguette at home, you need steam somehow in the baking process to get the loaf crusty. Either dampen the surface of the loaves with a mist of water, or place a pan of hot water in the oven below the bread.

Don’t despair when a baguette goes stale on you the next day. Use in savoury or sweet puddings that call for stale bread, or use for pain perdu.

Use on day of purchase or freeze that day. During that day, store in a paper bag (not plastic if possible: plastic will make the crust go very soft.)

In the UK, in blind taste tests the BBC did in 2002, it was a supermarket (Waitrose’s) that ended up having the best baguette, beating the “artisanal” loaves by a country mile.

In summer 2011, coin-operated baguette vending machines started to appear in Paris. Baguettes are stocked in the machine partially-cooked; the machine finishes cooking them in about 60 to 90 seconds, and dispenses them steaming hot to customers. The machine was invented by a baker from Hombourg-Haut, named Jean-Louis Hecht. The machines face onto the streets; similar machines have started appearing in some French supermarkets.

The machines allow access to fresh baguettes 24 hours a day, which is handy for shift-workers and those working off-hours.

Baguette is a French word for a “rod”; it is also used for pool sticks and magic wands.

In France, baguettes are carried home under the arm. A piece of paper is wrapped around the baguette where your armpit holds it tight — just in case you ever wondered.

“[Poilâne]’s round boule was his alternative to the baguette, the long narrow sticks of bread that he refused to carry in his shop. They are not authentic, he often pointed out; they were introduced to France by an Austrian ambassador in the mid-19th century.” [3]Rourke, Mary. Lionel Poilane, 57; French Baker Renowned for Round Loaves. Los Angeles: Los Angeles Times. 6 November 2002.

Julia Child recounts in “My Life in France” that she had a hard time recreating authentic French baguettes with American bread flour, until she realized there was too much gluten in the bread flour making it too strong, and that a weaker flour with less gluten was needed. She also attributed the issue to bleached versus unbleached flour:

“There remained a few problems to work out. First, what kind of American flour (which has a higher gluten content than French flour) could be used in place of the softer, unbleached French flour? We conducted numerous experiments, and although Calvel loathed bleached flours, we found that typical all-purpose bleached American flour worked just fine.

Next came the challenge of transforming a home oven into a simulated baker’s oven, with a hot surface for the bread to bake on, and some kind of simple but effective steam-generating contraption. These elements were necessary for one to get just the right rise and just the crisp crust of true French bread. Eventually Paul’s Yankee ingenuity solved the first problem, when he slid a tile made up of asbestos cement onto the oven rack to heat up with the oven: a perfect, affordable baking surface. But creating the all-important burst of steam, which forms the crust, was more difficult. Eventually we discovered that, by placing a pan of cold water in the bottom of the oven, and dropping a very hot brick (or stone, or metal ax-head), into it, one could produce a perfect steam puff.

Et voilà! We had created the first successful recipe ever for making French bread — the long, crunchy, yeasty, golden loaf that is like no other bread in texture and flavour — with American flour in a home oven. What a triumph exclamation!” [4]Julia Child with Alex Prud’homme. My Life in France. New York: Alfred A. Knopf. 2006. p 256.

Chevallier, Jim. About the Baguette: An inquiry into the origin of the baguette. 2009. Retrieved October 2009 from http://jimcheval.com/books/baguette .

This web site generates income from affiliated links and ads at no cost to you to fund continued research · Information on this site is Copyright © 2023· Feel free to cite correctly, but copying whole pages for your website is content theft and will be DCMA'd.
Tagged With: Baguettes, Breakfast, French Breads