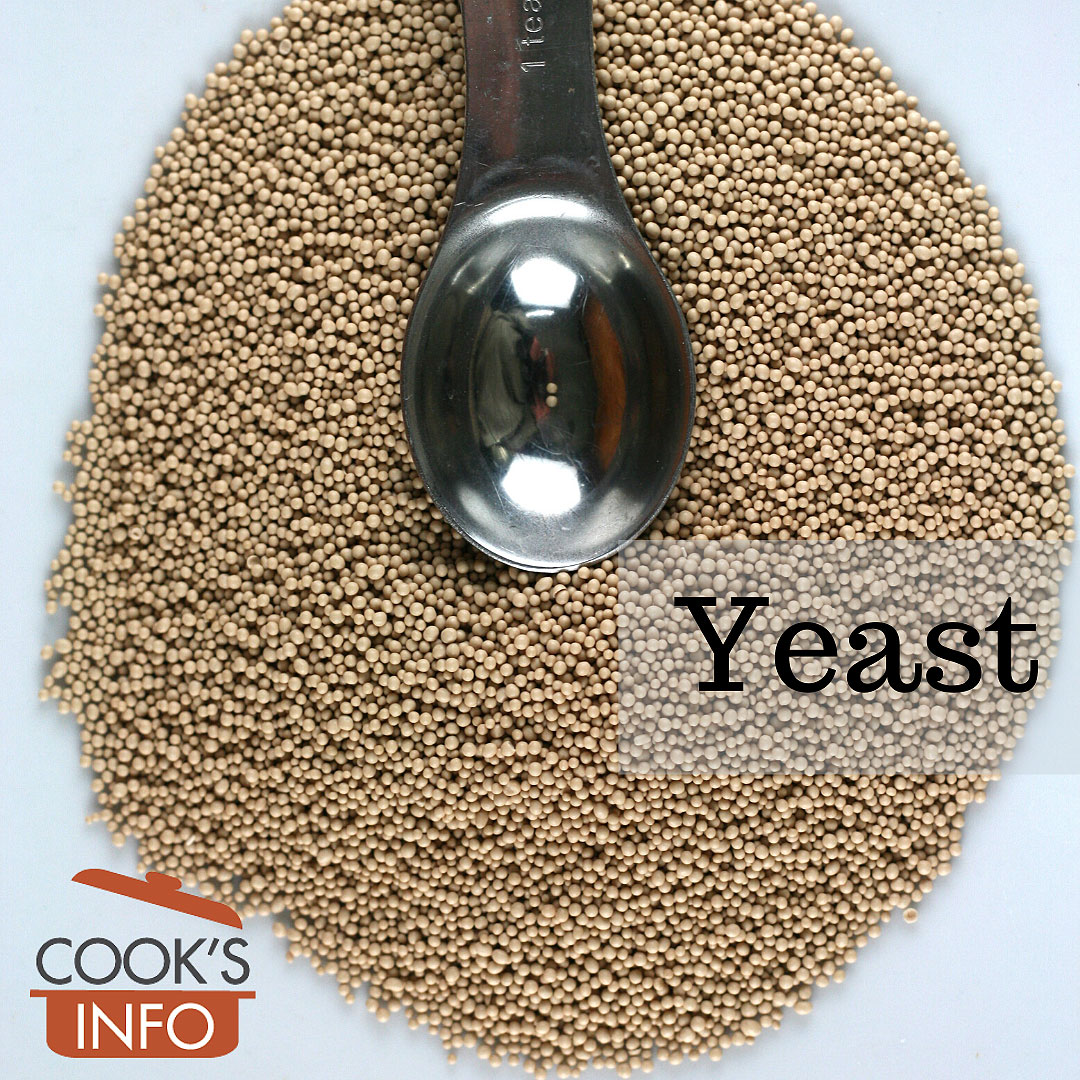 Yeast is a one-cell, plant micro-organism: essentially, a fungus.

The main variety of yeast that we use in the food world is “saccharomyces cerevisiae.” This is often referred to as “baker’s yeast.”

We use yeast to kick off fermentation in bread and alcohol. In bread, carbon dioxide gas bubbles created by the fermenting yeast get trapped among the gluten strands and cause the dough to rise. For the most part, yeast is only of use in doughs where there is gluten. Yeast produces carbon dioxide very slowly; the dough has to be elastic and strong enough to hold it for a period of time. This elasticity comes from gluten. Weaker doughs, whose structure isn’t able for long to fight against air bubbles trying to escape, needs a faster source of gas: for them, this comes from chemical leaveners such as baking soda and baking powder.

To produce yeast commercially, one lively looking yeast cell is chosen (using a microscope) from the desired type of yeast. The lucky cell is transferred to a sterile tube or dish with nutrients, where it reproduces itself by merrily budding away to make more yeast cells. Then, the cell and his new family are divided up, and transferred to flasks with more nutrients, and allowed to further multiply. This new population is then used to populate large tanks, and the new population of those large tanks is then transferred to even larger tanks — sometimes holding up to 225,000 litres (approx 60,000 gallons.) At this stage, the yeast will have multiplied 5 to 8 times, and literally tons of yeast will have come from 1 cell.

Centrifugal force is then used to separate the yeast from the nutrient liquid, and the yeast is washed. What’s left is a froth of yeast, or “cream cream / yeast cream”, as it is called in the industry. Some of this is sold as a thick liquid in tankers as is to large industrial bakers. Some of this is compressed in cakes to be sold as fresh yeast (aka “live yeast”), and the rest is dried and packaged in various forms.

The thing to remember is, yeast isn’t a chemical. It’s a living thing. Laurel Robertson, of Laurel’s Kitchen fame, called them her “yeast beasties.” For yeast to grow, it needs heat between 21 to 32 C (70 and 90 F.) It is killed when temperatures reach 55 C (132 F), and de-activated when temperatures drop to 4.5 C (40 F.) It needs food, in the form of sugar and/or starches, which it converts to carbon dioxide. And it needs water, and moisture.

When dehydrated, yeast remains in a state of suspended animation. It re-animates the minute it comes into contact with any moisture or water; so you need to make sure that the minute it comes alive, that it has food, so that it doesn’t immediately die as well.

In small amounts, sugar provides the yeast cells with additional food. In larger amounts, it slows down their progress because it upsets the water balance within the yeast cells. Sugar competes with flour proteins for water which the flour proteins use to develop gluten. For this reason, high-sugar dessert breads take longer to rise. However, because sugar molecules like to absorb water, it means the finished bread will stay moister longer. Sugar also causes browning reactions in the crust.

Salt in small amounts inhibits the activity of protein-digesting enzymes in the yeast, which would want to eat the gluten that is being developed. However, too much salt will also dramatically inhibit the activity of the yeast. Bread risen without salt will have a much coarser texture. If you have to watch your salt intake, look for some Tuscan bread recipes, many of which are traditionally made without any salt at all.

You may be wondering why yeast produces carbon dioxide in bread, but alcohol in — well, alcohol. Yeast actually produces both carbon dioxide and ethanol in both beer and bread. In beer the carbon dioxide helps to carbonate the beer and make it bubbly, and in bread, the small amounts of ethanol alcohol produced are burned off during baking.

In bread, yeast only gets a few hours while rising to produce a bit of ethanol. In brewing, however, yeast gets up to a week to make alcohol. The yeast continues making alcohol up until the brew is 10% alcohol, at which point there is too much alcohol in the environment for the yeast, and the yeast dies. 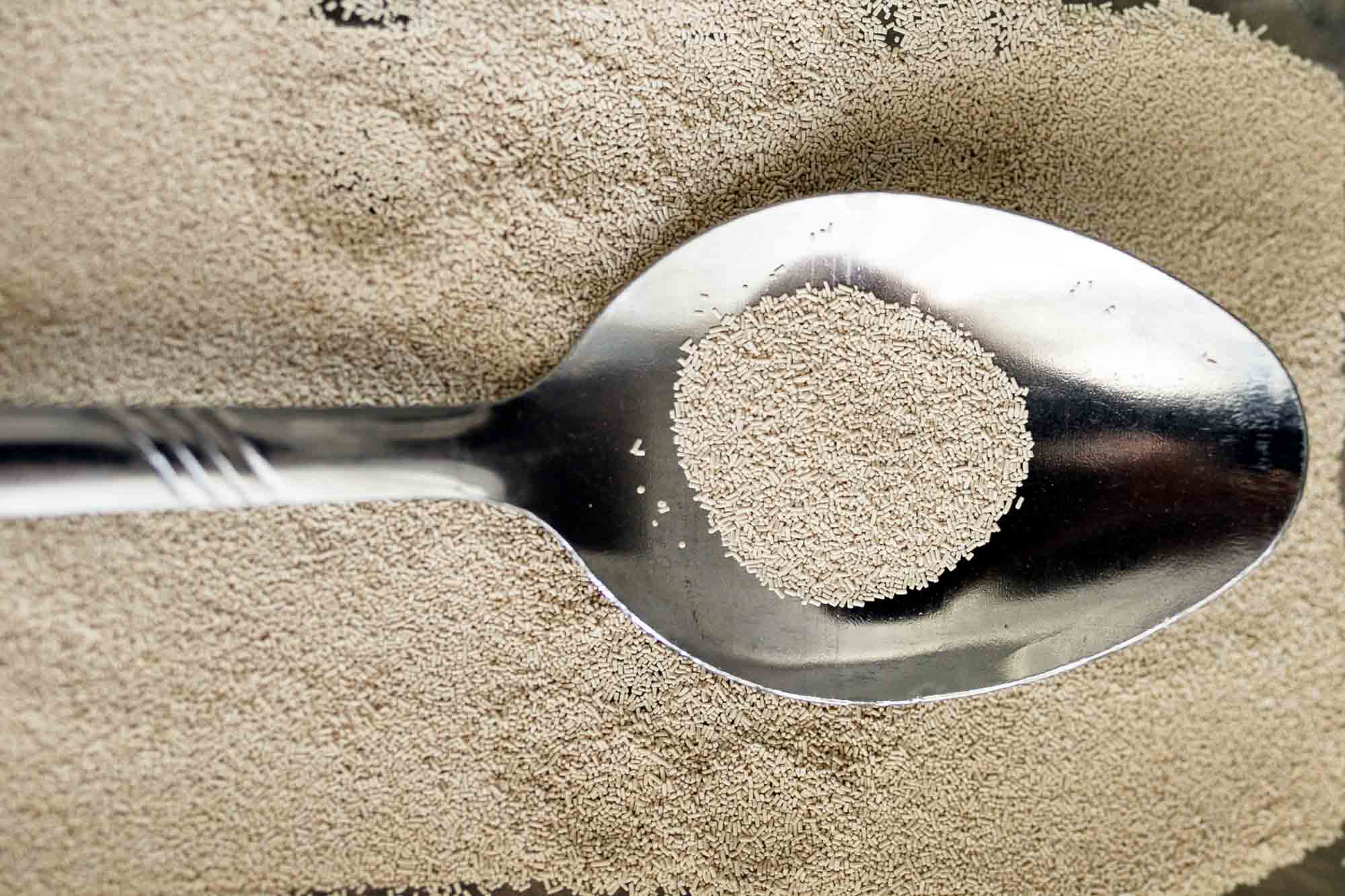 In the alcohol world, they call baker’s yeast “ale yeast”, as it floats on top the beer to make ales. To make lager beer, brewers use a different strain of yeast altogether, which lies and ferments on the bottom of the beer (useful if you are making beer in the winter months, as yeast at the bottom is less susceptible to cold drafts than it would be floating at the top.)

Recipes will often ask you to mix yeast with tepid water. What temperature exactly is tepid? Drop some of the water on your wrist — you should not feel any temperature from the water; it should feel neither cold nor warm.

Don’t try substituting baking powder or baking soda; just find a different recipe that calls for them instead, as the procedure for the flour and dough is very different.

Yeast-raised breads are good sources of B vitamins (except vitamin B12) and of lysine, an amino acid otherwise very limited in grains. The protein content of yeast constitutes over 50% of its weight. Also high in phosphorus.

As there have apparently been some (as in a few) reported cases of yeast infection in women reputedly caused by working with dough, it is recommended to wash your hands thoroughly after working with yeast-risen dough.

[Ed: whether a package of dry yeast equals 2 ¼ teaspoons or 1 tablespoon will depend on the size of the yeast granules and the manufacturing process. King Arthur Flour notes, “You may find older recipes calling for “1 packet active dry yeast.” A packet used to include 1 tablespoon of yeast; currently, it’s closer to 2 generous teaspoons, a tribute to improved manufacturing methods that produce stronger, more active yeast.” Accessed April 2020 at https://www.kingarthurflour.com/learn/resources/yeast]

Shelf storage is fine for dry yeast, but you can triple (or more) the life of your dry yeast by refrigerating or (especially) freezing it.

The Egyptians used yeast: they even had commercial bakeries and breweries.

The Romans preferred yeast-raised breads, thinking them more nutritious. They made yeast by either mixing millet or wheat bran with grape juice and allowing it to ferment in the air and then drying it in the sun, or by putting barley cakes in clay pots until they became sour and yeast developed on them. It wasn’t until the microscope was invented in 1676, however, that man was able to get a close look at yeast. In 1859, Louis Pasteur discovered how yeast actually works.

Before the advent of commercial yeast cakes in 1870 in America, everyone had to grow their own yeast starters at home (or borrow from a neighbour). Dried yeast was invented during the Second World War.

The scientific name, “saccharomyces cerevisiae”, means “sugar fungus from beer”. (If you know the Spanish word for beer, “cerveza”, you may have guessed at the “cerevisiae” part already.)

A medieval English term for yeast was “godisgoode.” 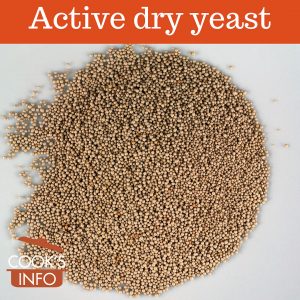 Active dry yeast is yeast cream that has been dehydrated. It is often mixed with "sorbitan monostearate" (an emulsifier), and ascorbic acid (Vitamin C.) The Vitamin C creates an acidic environment that yeast like and flourish in. It also helps to... 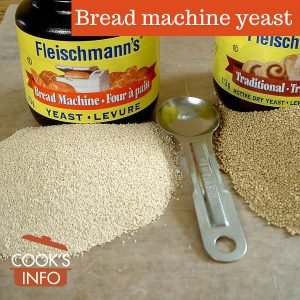 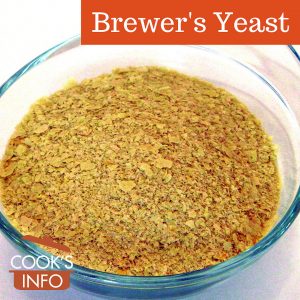 Brewer's yeast is yeast left over after it has been used for brewing. It is sterilized, dried and sold to be used as a nutritional supplement, or food flavouring. 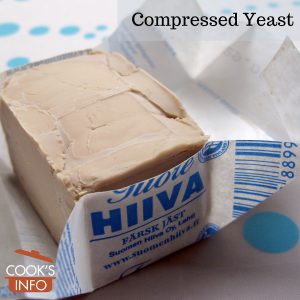 Compressed yeast is made from a liquid yeast culture, from which a good deal of the water is drained off by centrifugal force. It has a very short life-span, so as a rule of thumb, use or freeze within two weeks of purchase. 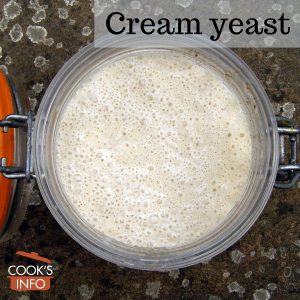 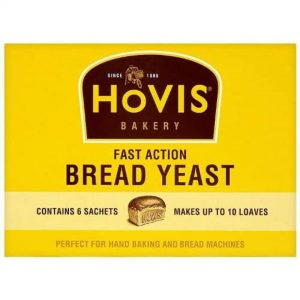 Fast action bread yeast is a very fine grain of yeast, almost a powder. It is designed to be mixed straight into dough, right out of the package. The dough will need only one kneading and one rising.

Cream yeast (see separate entry on how cream yeast is grown) is pressed through filters to form a more solid matter, which is then compressed into small cakes about ½ ounce (15 g), or larger bricks about the size of a pound of butter. Most of us will...

Inactive Yeast is made from yeast cream that has been pasteurized and sterilized, so that the yeast is dead, with no leavening power, but leaving its nutritional content and other properties behind. The yeast is generally sterilized around 250 F...

See main entry on Yeast for how Yeast Cream is grown. While there is a more or less agreed-upon name for "Active Dry Yeast" in the English speaking world, you will find Instant Yeast called by different names on the same store shelf. Cream Yeast...

Koji Yeast is a fermenting aid used in China and Japan in creating products such as miso sauce, soy sauce, sake, shochu, huangjiu, natto, etc.It is a mould with long, dark green spores. [1]A separate species, "Monascus purpureus", is red The mould...

Torula Yeast © Denzil Green Torula Yeast has a light brown colour, and when cooked, has a slightly meaty taste. This makes in popular in vegetarian imitation meat products, and as a meat extender. It is also used as a flavour enhancer in prepared ...