Baloney
© Denzil Green
Contents hide
Baloney is a now much-maligned North American sausage used primarily as an inexpensive cold cut for sandwiches. It is not really known in Europe.

Baloney is a lightly-spiced sandwich or luncheon meat that is already cooked and ready to eat. It has a smooth-texture, very much like the meat in North American hot-dog wieners. Traditionally made from pork or beef, you can now also find it made from chicken or turkey. The parts of meat used are the tougher parts of meat that are high in collagen. The meat is ground finely and packed into a skin (usually an intestine) like a big sausage. It is not aged.

Some people insist on comparing it to the Italian cold cut called Mortadella, and dismissing baloney as a pale imitation. There’s no particular logic in doing this, though, without following through and comparing bacon to prosciutto, breakfast sausage to salami, etc. Baloney was perhaps originally inspired by the Italian Mortadella, though there’s no actual proof of that. Even if it were, Italian-made Mortadella is far more usefully compared with North American made Mortadella. 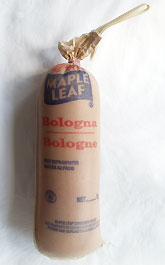 Baloney in roll<br>- © Denzil Green</div>]Baloney is usually served to you in round thinnish slices, whether bought this way or already cut for you.

Baloney is often also served fried as well. Baloney to be fried should be cut thickly. Sometimes it is cut up to ½ inch (1 cm) thick, especially if it’s to be served in a hamburger bun instead of a hamburger patty.

When frying it, people sometimes cut slashes in the edges of the Baloney to stop the edges from curling up. Other times, though, that’s exactly what you want the edges to do, so that the curled-up edges transform the slice into “Baloney boats” or “Baloney cups” into which you can spoon baked beans, mashed potatoes, grated Cheddar, etc. You can also crack an egg into a curled-up slice still in the frying pan, cover the pan, and let the heat and steam cook the egg.

For a breakfast dish, you can line muffin tins with a Baloney slice, crack a raw egg into it, sprinkle with grated cheddar and bake until the egg is cooked.

Store refrigerated at all times.

Some sources say Baloney was invented by Italian immigrants to America in the delis they ran, perhaps as a version of Mortadella.

This is just conjecture so far though: there hasn’t been a single documented instance brought forward yet (2006) that it was sold in Italian delis, or that, though many Italians even in this “modern, store-bought food age” remain expert home sausage makers, that this particular batch of immigrants had on the voyage over forgotten what Mortadella looked and tasted like.

Baloney is presumed (by popular myth amongst food writers) to have come about as a short form of “Bologna mortadella”, which was shortened to just “Bologna”, and then which, as Americans tried to pronounce it, became “Baloney.” This, however, is just pure conjecture. There is no evidence yet presented for stringing these three separate words together like this. In fact, you could say that this “urban myth” might be pure “Baloney.”

The word “Baloney” is also used now as a euphemism for saying something is “hogwash”, “bullshit” or “rubbish”. When this meaning is meant, the word is certainly almost always spelt “Baloney” and not “Bologna”. Sometimes people even merge the two spellings to invent a third word, “boloney.”

Despite the madness in North America for transforming other nouns such as Christmas into Xmas and doughnut into donut, the packers of Baloney perversely insist on resisting popular usage and still spell it as “Bologna.” The EU wants North Americans to stop using this spelling of the word for it because of the credence it lends to the popular myth of it being a version of “Bologna Mortadella.”

This web site generates income from affiliated links and ads at no cost to you to fund continued research · Information on this site is Copyright © 2022· Feel free to cite correctly, but copying whole pages for your website is content theft and will be DCMA'd.
Tagged With: American Food, Sandwiches