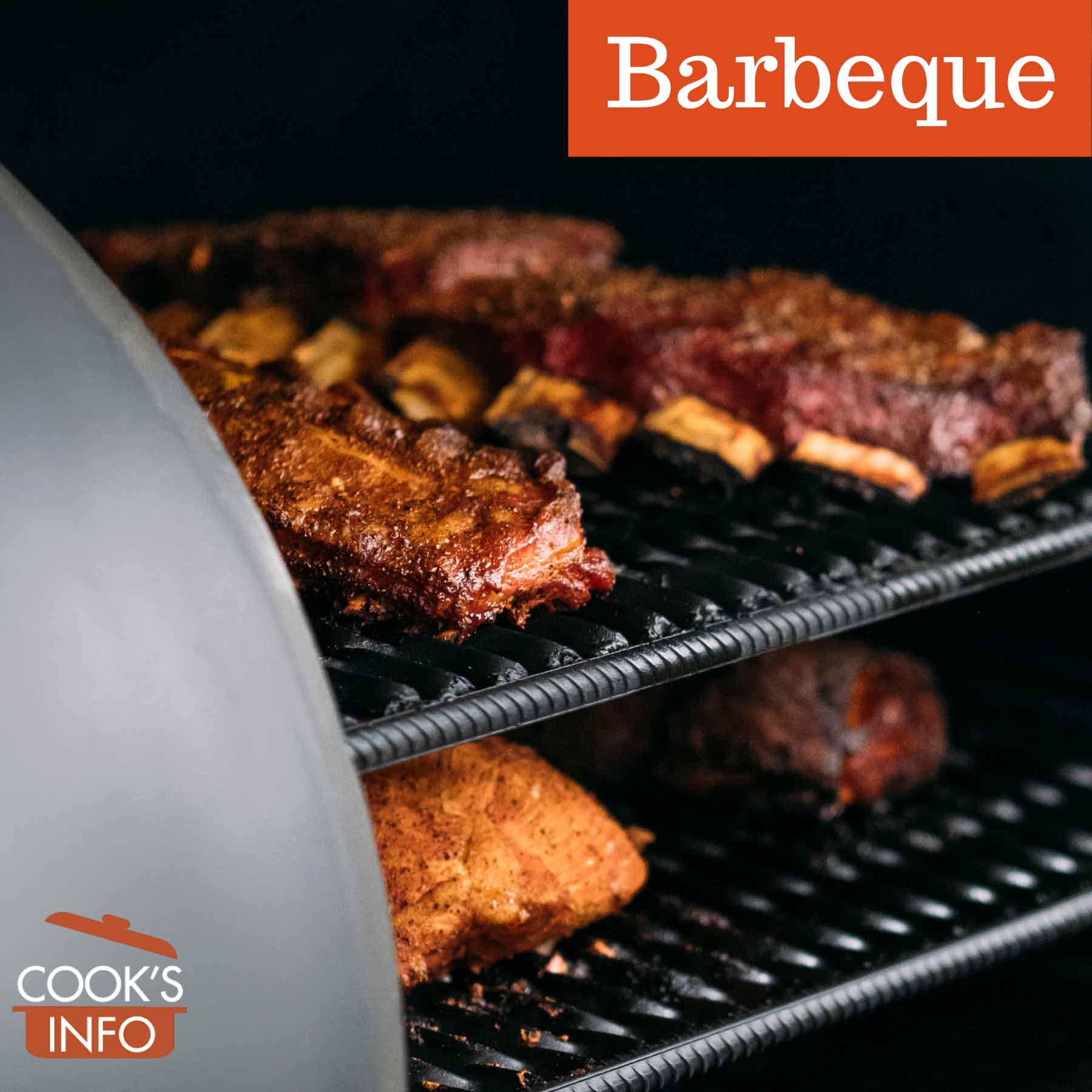 Barbequing cuts of meat in a smoker. Golubovy / Canva Pro

Barbequing is cooking food outdoors over a heat source. The heat source will vary based on several factors but the greatest factor will be the definition of barbeque itself in the part of the world where you live.

What qualifies as barbeque?

Barbequers tend to hold very strong opinions about what does and does not qualify as barbeque.

In many parts of the English-speaking world (such as Australia, Canada, Ireland, New Zealand, and the UK), casual cooks use the word “barbeque” to mean anything cooked on an outdoor grill. If you’re one of these people who uses the word “barbeque” in that kind of generic way, you need to be very careful not to use it like that around people from the American South. You will get an hour-long talking-to about what constitutes proper barbeque, and then, probably get fed “real barbeque” as well to make sure you understand the difference.

People in the Southern States make a distinction between barbequing and what they would call grilling. For them, barbequing is “low and slow” and by slow, they mean anywhere from 4 or 5 hours up to 18 hours, over actual smouldering wood, in a pit or in an enclosed smoker typically shaped like a drum laid on its side. It usually involves cheaper, tougher cuts of meat that develop beautifully with this type of cooking. Think of their barbeque pits as a real man’s version of a slow cooker.

What everyone else does, they will clarify for you, is “grilling.” Cooking quickly over a high flame food such as steaks, fish, pork chops, hamburgers, hot dog wieners, kebabs is grilling, they will maintain. (South Africans, by the way, call this “braai” or “braaivleis”.) 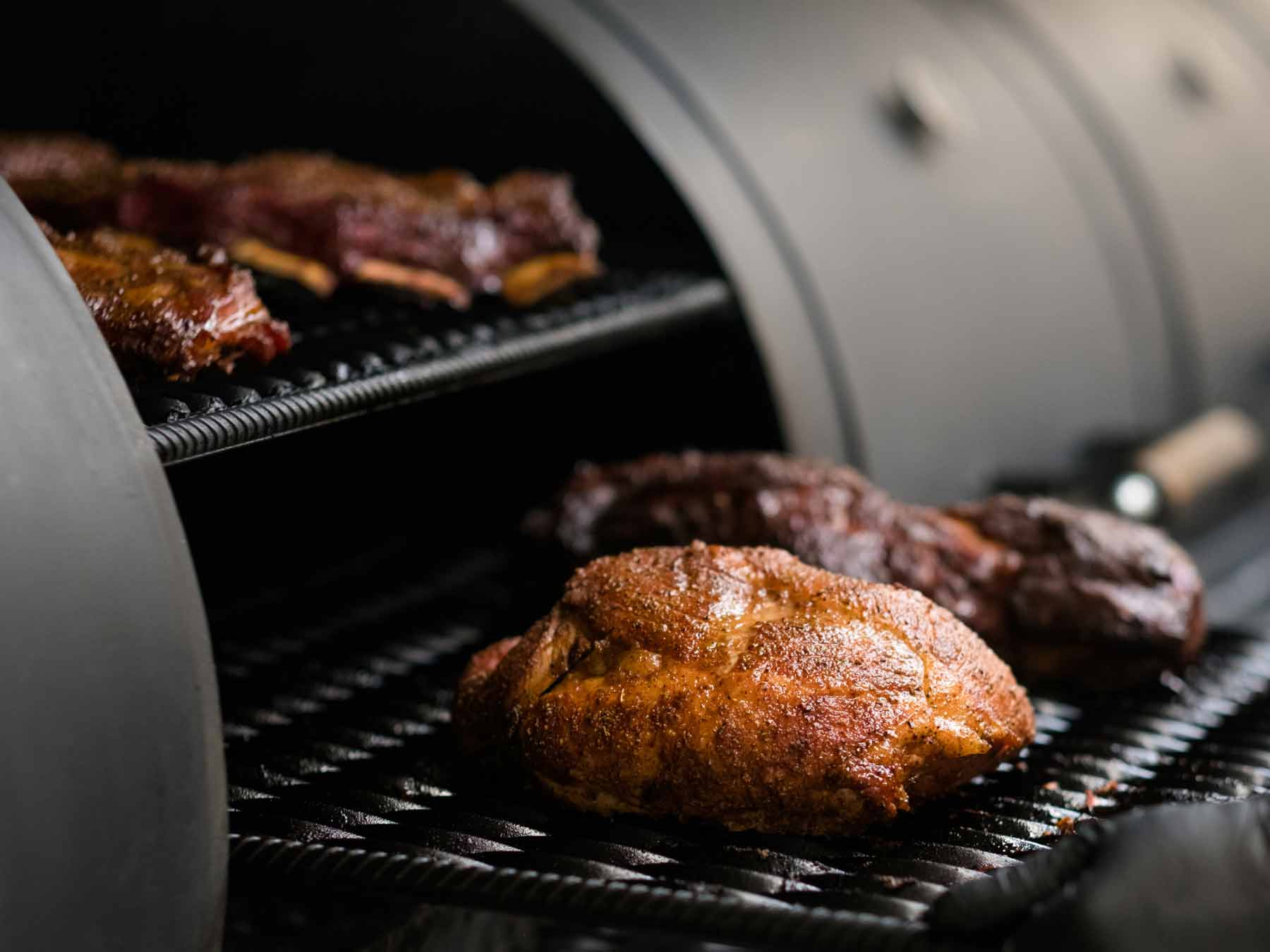 Barbequing cuts of meat in a smoker. Golubovy / Canva Pro

For comprehensive proper barbequeing tips, consult one of the many books or Internet sites dedicated to the art.

Barbequing can be a very healthful way of cooking as it allows the grease to drip off the meat.

Anything that touched raw meat or fish is contaminated. Make sure you use separate everything for uncooked meat and fish — separate plates, knives, forks, etc. Never place cooked meat on a plate it was on before it was cooked. Don’t cut cooked meat on a cutting board you just used for the raw (unless you have washed it well, first). If you’ve ever heard stories of people getting food poisoning from barbeques, not doing this could be one of the prime reasons.

Don’t attempt to be thrifty by reusing marinades, sauces, etc., that the raw meat was in or that a brush that has touched raw meat has then been dipped back into. You’re not saving any money with a trip to the hospital and weeks off work. Some people say if you boil the marinade, you can re-use it, but what would that do to its flavour? Pitch it.

It’s pointless to try to pin-point who invented barbeque, as man has been cooking over open flame forever. We can, however, pinpoint the invention of the charcoal briquettes for barbeques, and that was by none other than Henry Ford, with a little input from his friend Thomas Edison. Ford used scrap wood and sawdust from his car factory, perfected the invention, then sold the rights to it to a man named E.G. Kingsford who commercialized it.

It is, however, certainly Americans who truly defined and popularized the barbeque. By the end of the colonial period, barbeque was already a tradition in the American South. In the 50 years leading up to the Civil War, plantation owners entertained with great barbeques, at which even the slaves would be fed. After the Civil War, and with the demise of the plantations, large barbeques moved to church picnics and political gatherings. It was a classless and raceless type of gathering, as the meat — almost always pork — was cheap, and everyone loved it. Even during the period of racial tension in the American south in the 1950s and 1960s, whites would sneak into some black-owned barbeque restaurants because they felt the barbeque was better there.

“Around here, grillin’s grillin’ and barbecue is, well — sigh, sweat — what dinin’ in heaven’s got to be all about.” — Jane Garvey (Food writer)

“I’m a man. Men cook outside. That outdoor grilling is a manly pursuit has long been beyond question. If this wasn’t understood, you’d never get grown men to put on those aprons with pictures of dancing weenies on the front, and messages like ‘Come ‘n’ Get It!’ ” — William Geist

Speculation on the origin of the word barbeque ranges from an Indian word “barbacoa”, meaning a “set up” to smoke meat, to French pirates in the Caribbean, who might have used the phrase “de barbe et queue” (whiskers and tail) to describe a whole pig being roasted (that one surely has myth written all over it). The bottom line is, nobody really knows, but everyone likes to debate it around a barbeque or grill on a summer’s evening with a nice beverage in their hands, so perhaps it’s best that we never truly know.

The confusion over what word to use — grill or barbeque — isn’t just limited to English speakers.

German seems to use the word “grill” for both barbeque and grilling. To barbeque something is “etwas auf dem Grill kochen”; to go to a barbeque is “wir gehen zu einer Grillparty”.

In an article in the French newspaper “Le Figaro”, 24 May 2003 by Martine Albertin et al, three separate words (“gril”, “barbecue”, and “braise”) are used in the space of 3 lines. The 3 words are italicized below: