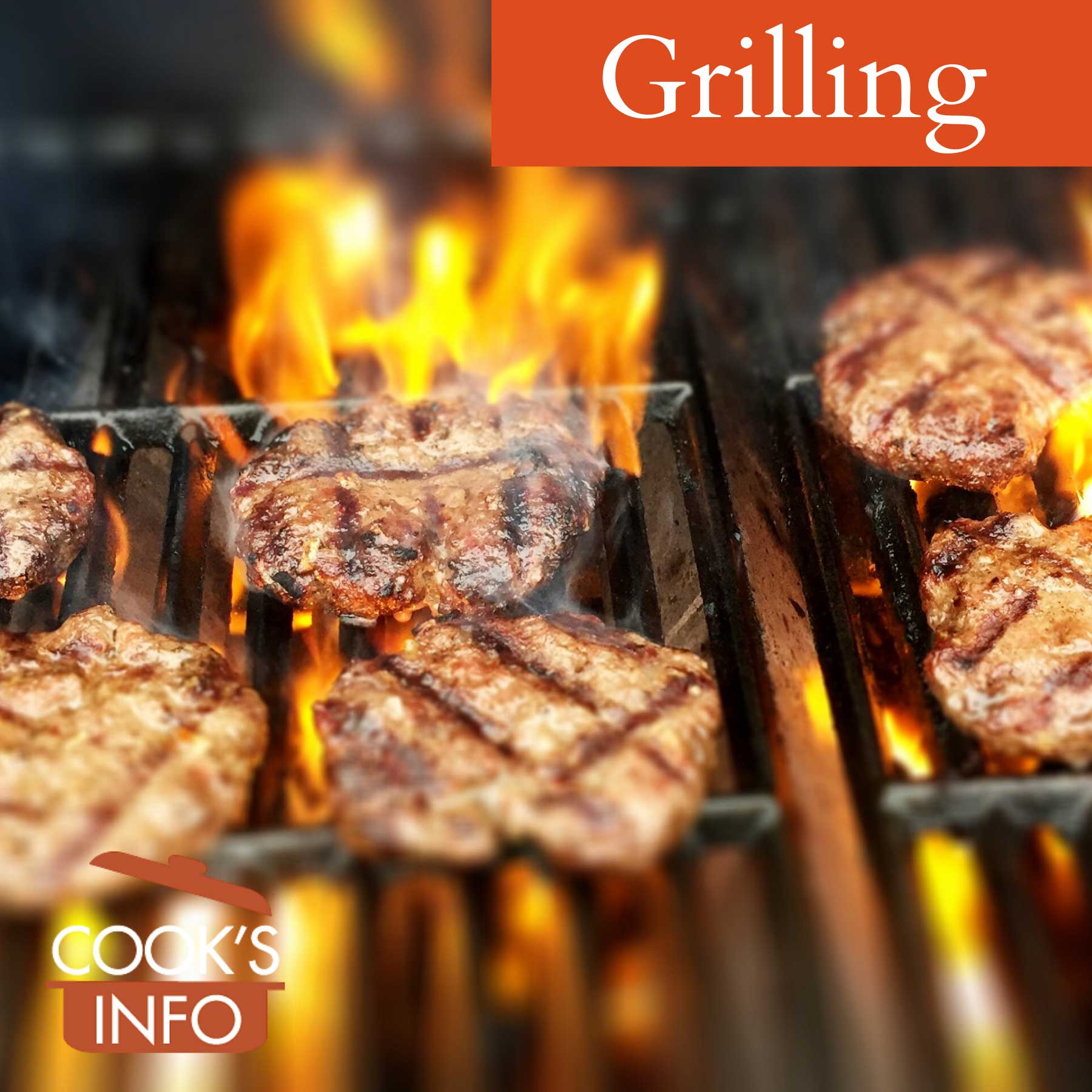 Grilling is a cooking method that involves a grate of connected metal bars. Whether the heat source in grilling comes from above or below depends on where you live.

Henri-Paul Pellaprat, co-founder of Le Cordon Bleu cooking school in Paris, gives the definition of ‘to grill’ as:

“In grilling, hot air is… the heat transfer agent and the principles underlying the method of grilling are the same as when roasting. Grilling can be carried out over a glowing and smokeless fire, beneath the glowing reflector of a gas grill or over a hot grid or gridiron. The major difference between roasting and grilling is that this is a very quick method of cooking throughout which a high degree of heat is maintained. Grilled meat should be juicy and tender when cut and have a slightly puffy appearance caused by the sealing in of the meat juices as a result of the application of intense heat.” [1]Pellaprat, H.P. Modern French Culinary Art. London: Virtue & Company Ltd. 1969. Page 82.

The grate both raises the food up off the heat source, and allows fat from the food to drip away below. The food sits on the grate.

Commercially, grills can be found in restaurants. Domestically, grills inside the home are rare: they are more likely to be gas grills outdoors.

Outdoor gas grills can be run off of propane tanks, or, off of fixed gas lines running from the house. If you plan to run yours off a fixed gas line, check to see what your gas grill is “spec’d” for. If for instance it is “spec’d” for 95,000 BTU and your gas pipe connection is only, say, 35,000 BTU max, then your grill will never get searing hot because the gas line won’t be able to supply the draw that the grill needs.

Grill can actually refer either to the act of cooking this way, or to the open grate on which the food is placed, or to the complete cooking device, as in a gas backyard grill that you cook steaks and burgers on.

“GRILLING: Grilled meat is usually described as an entrée, although it can be served as a main dish. Grilled Châteaubriands, entrecôtes or ribs of beef, if served only with water-cress and herb butter, are also a main dish. Nevertheless we repeat that all garnished grills served with a sauce are really entrées. If a piece of meat is to be grilled properly and well, the grill must be spotlessly clean and very hot before the meat is placed on it, i.e., the source of heat must be warmed up before-hand, whether it is an electric, gas or charcoal grill. The meat is lightly oiled and salted on both sides, placed on the hot grill and grilled for a few minutes, and then given a half turn so as to make the popular square grill marks. As soon as beads of blood appear on the raw side, turn the meat over and grill the other side in the same way. When the blood starts to bead on the cooked side the meat is done. During grilling the meat should be neither pressed nor pierced to prevent loss of blood. Note: As regards the terms grill, entrée, relevé, roast, etc., these differences only have a point at big dinners where there are a number of courses. In the case of a normal meal, only one main dish is served, which consists of meat, poultry or game.” [2]Pellaprat, H.P. Modern French Culinary Art. Page 406.

In England (as well as in Australia), the word “grill” means an overhead heat source. The grill is a metal grate, but it is not used to hold the food. Instead, this grate is the actual heat source. It is suspended above a cooking cavity in the stove, and the food is placed underneath the grill to cook. Thus you will see English written recipes instructing you to brown food “under the grill”

Properly the word should be “broiler” in homes, and “salamander” in restaurants”, but suggesting an alternative word to the English is met with derision and guffaws.

Some misuses of grill

The world “grill” is misused in North American English to refer to a pan that has a solid bottom with ridges or grooves in it. Granted that the lines are designed to fake the visual impression of something having been cooked on a grill — but ridges or not, it’s still just a ridged frying pan, and not a grill. There is no such as a “grill frying pan.” If it’s got a solid bottom, it’s either a frying pan, or a griddle (or in Scotland, a girdle.)

What North Americans call a “grilled cheese sandwich” is actually a “griddled” or “fried” cheese sandwich. But you’d never launch a successful campaign to correct the term. In the American south, where the usage can be even more off-base, you might occasionally hear the sandwiches described as “grill-fried.”

When many people in the UK, Australia and in Canada grill outside, even though they are doing true grilling, they refer to the process as “barbequing.”

Australians throw everybody off by saying they are putting food “in the griller.”

Granted, how people use the word “grill” for their own purposes in their own areas of the world is so deeply entrenched that you’ll never change them. Given, however, it is CooksInfo’s job to distinguish these differences, we have to be pedantic on this at least on paper.

When using an outdoor grill to cook larger cuts of meat and poultry, such as a whole chicken, leg of lamb, or prime rib, keep the grill tightly covered and resist the temptation to peek. Every time you lift the lid, you add 5 to 10 minutes to the cooking time.

Do not use a spatula / flipper to press down on food while it is grilling. You are pressing all the juice out of the food, causing it to dry out.

Ideally, use tongs to flip food on a grill. A fork pierces the meat and lets all the juices drain out.

In the 1300s, only wealthier homes had grills. Grills could also be used to toast bread. 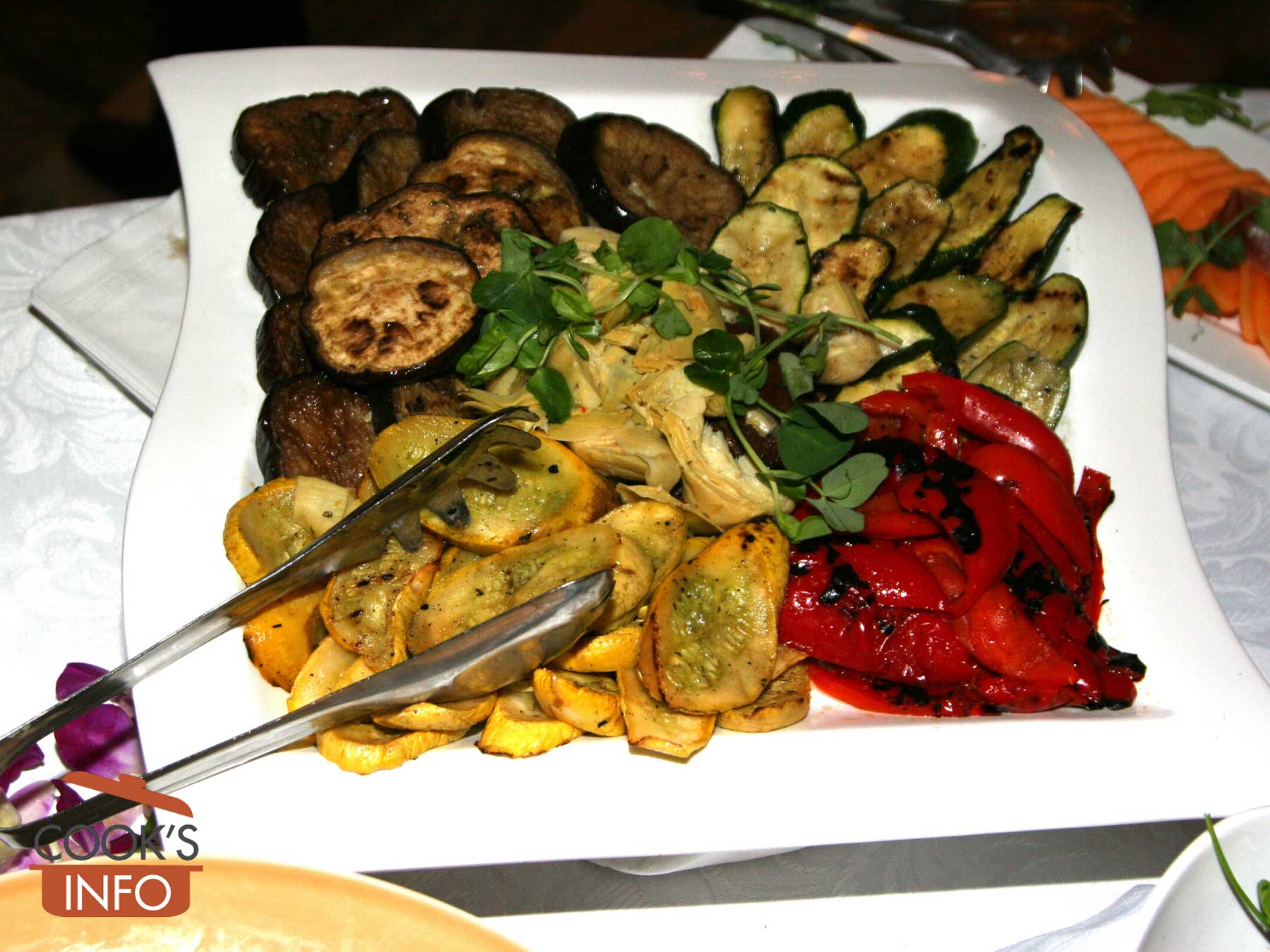