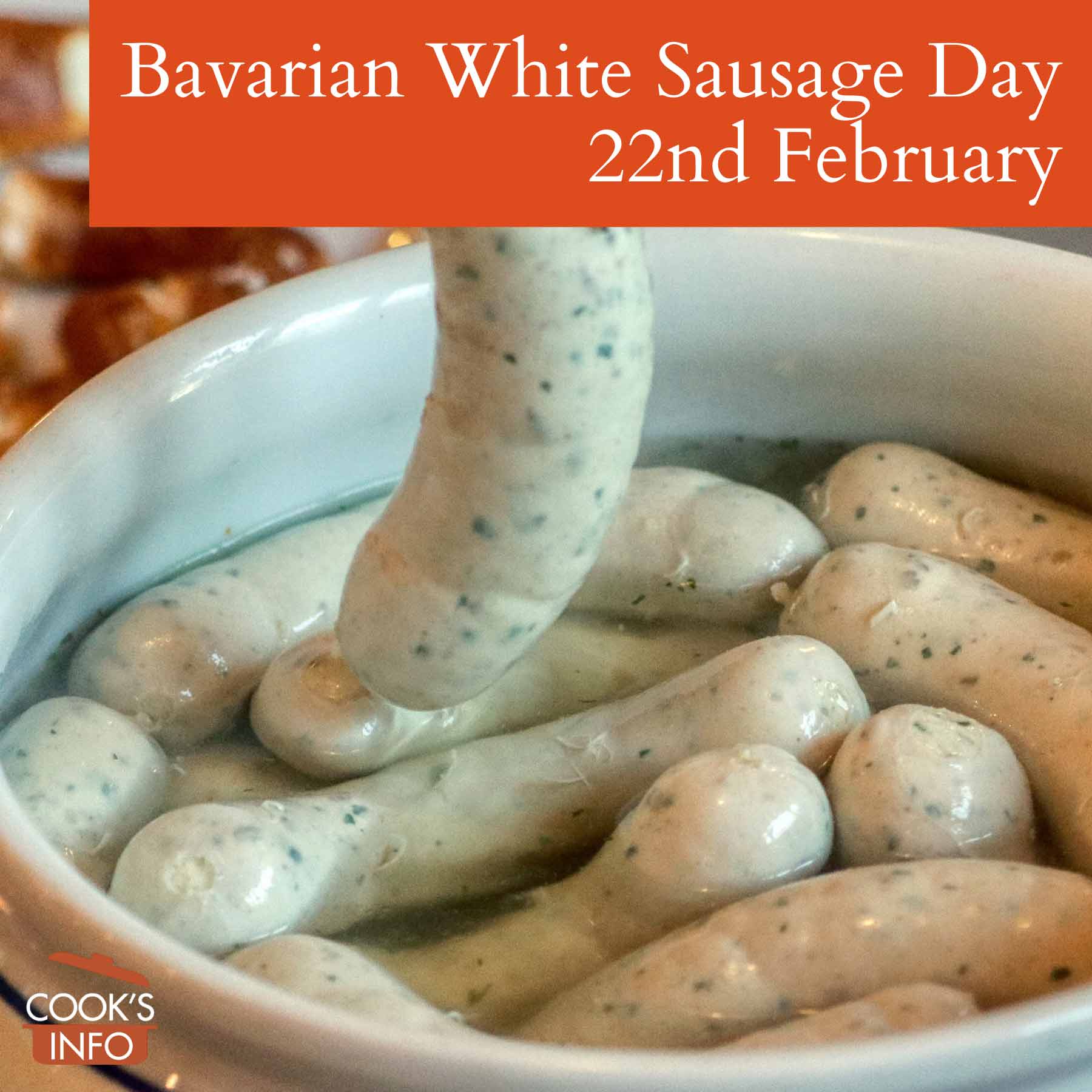 The 22nd of February is Bavarian White Sausage Day.

It celebrates the iconic white simmered veal sausage known as “weisswurst” that is a symbol of Bavarian cuisine.

It is typically served with sweet Bavarian mustard, bread pretzels, and wheat beer.

In Bavaria, white sausage are typically eaten as a mid-morning snack before 12:00 noon. You eat one out of hand, holding the sausage between your fingers, and sucking the insides out of the skin (this is called “zuzeln“), discarding the skin.

You reveal yourself to be a tourist by ordering them later in the day, and using a knife and fork. If you do use a knife and fork, make a cut along the length of the sausage, and then use your knife and fork to separate the peel from the skin. Discard the peel.

The sausage is also known as “white wurst”, or, in German, “weisswurst“. The day in German is known as “Tag der Weißwurst“.

There are also vegetarian and vegan versions now.

If you are outside of Germany, and plan on having some on this day, remember you may need to scout out in advance where you can get them.

The 22nd of February was picked because, reputedly, it’s the exact date that a man, Joseph Sepp Moser in an inn called ‘Zum Ewigen Licht’, on Marienplatz square in the centre of Munich, invented the sausage. The story goes that demand from customers at the time was brisk, as it was Carnival time. He was making sausage to try to keep up with demand, and, having run out of the sheep intestine which he would have typically used for the sausage casing, he used pig intestine instead, which was thinner. And, because he didn’t know how the casing would hold if the sausages were fried, the story continues, he simmered the sausages in water instead.

It was proclaimed by the Arberland butcher’s guild in the Bavarian Forest south of Munich, upon the initiative of the guild master Stefan Einsle. [2]Fritz, Albert. 22. Februar – Tag der Weißwurst. Zwiesel, Bayern: Weißwurst Blog Zwiesel. 21 February 2019. Accessed July 2021 at https://www.weisswurstbayern.de/?p=1273

Some people in Munich asked if they had a right to do that in Bodenmais, as the sausage was actually invented in Munich.

The sausage people in Munich were not happy about having the white sausage hijacked by southern local yokels. [4]Giese, Sven. Tag der Weißwurst in Deutschland am 22. Februar. 21 February 2021. Accessed July 2021 at https://www.kuriose-feiertage.de/tag-der-weisswurst/

According to a Regina Fanderl with Bavarian Radio 2, however, there’s actually little or no basis for any of the weisswurst creation story — including the date. She says it’s possible it’s an adaptation of the French boudin blanc, and, that it existed way before the purported date. [5]Fanderl, Regina. Die ersten Weißwürste werden serviert. Bavarian Radio 2. 22 February 2016. Accessed July 2021 at https://www.br.de/radio/bayern2/sendungen/kalenderblatt/2202-die-ersten-weisswuerste-werden-serviert-100.html

But as for where on earth the notion of an exact date of 22nd February comes from — no one seems to have any idea!

This web site generates income from affiliated links and ads at no cost to you to fund continued research · Information on this site is Copyright © 2023· Feel free to cite correctly, but copying whole pages for your website is content theft and will be DCMA'd.
Tagged With: Sausages