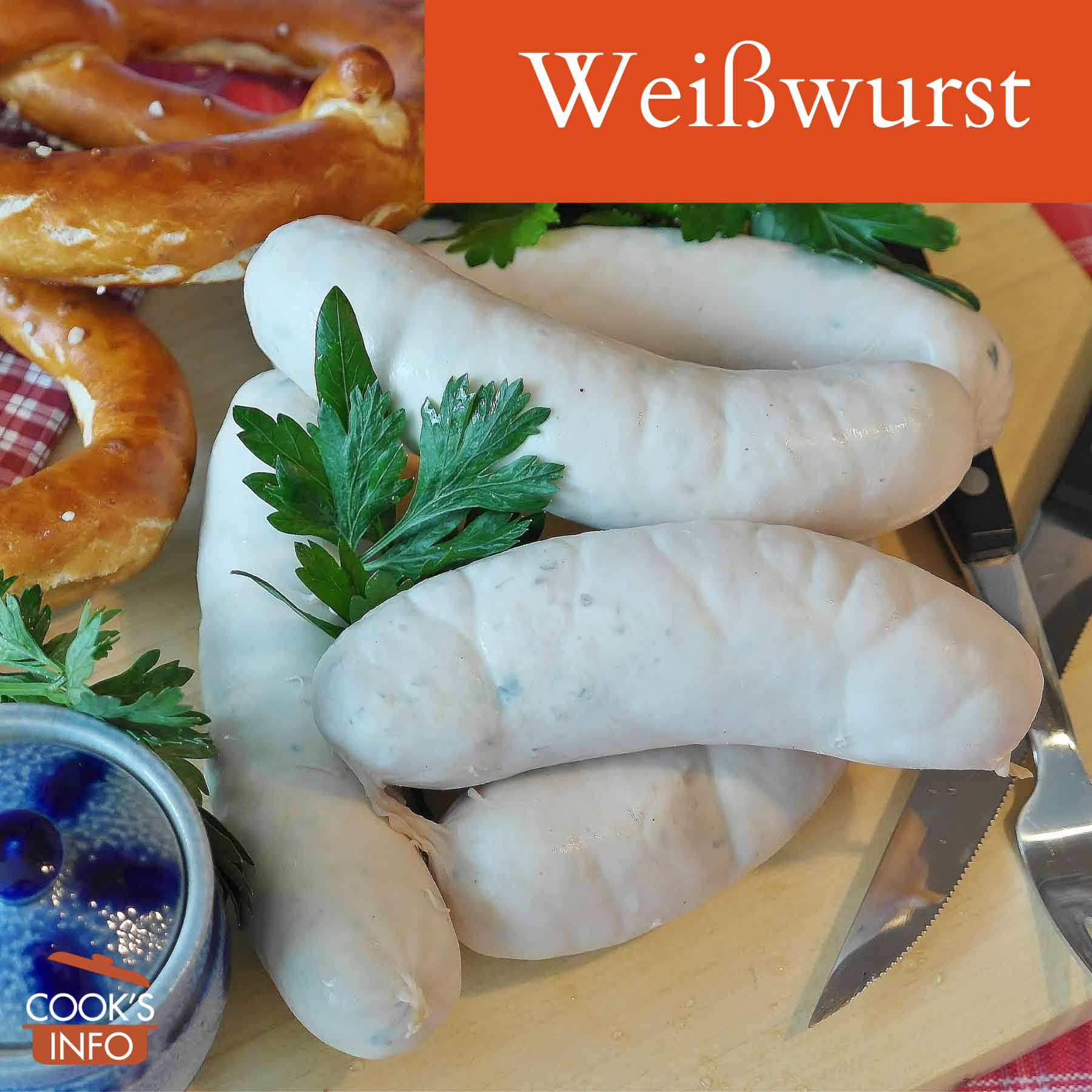 Weißwurst is a Bavarian veal and pork sausage.

The sausages are about 12 cm long x 3 cm wide (4 ¾ inches long and 1 ¼ inches wide). They have a fine, soft, loose texture inside, and are a very pale colour inside and out. The taste is mild, so mild that some people say they are all about the sweet Bavarian mustard that is customary to put them on. When cooked, the skin is tough.

The sausages are cooked by simmering, and traditionally served in the mornings with pretzels and sweet mustard.

There are also vegetarian and vegan versions now.

The meat is chopped finely, then shaved ice added. The fat is chopped and mixed in, then the minced Häutelwerk, and mild seasonings such as salt, lemon, parsley and pepper.

The mixture is packed into thin casings made of pig intestines. Sometimes the ends are sealed with metal clips. The sausages are then scalded or steamed for 25 minutes at 70°C (158 F), then chilled and sold on. Sometimes they are sold in delis in brine. Outside of butcher shops in Bavaria, you can buy them canned or vacuum packed. Occasionally, they are sold raw to buyers who intend to cook them straight away.

Even though they have had a preliminary par-cooking, they still need to be cooked more fully.

They are meant for cooking by simmering them in salted water for 5 to 7 minutes. Sometimes people say boil, but they actually mean simmer — you can’t boil them or the skin will burst open. 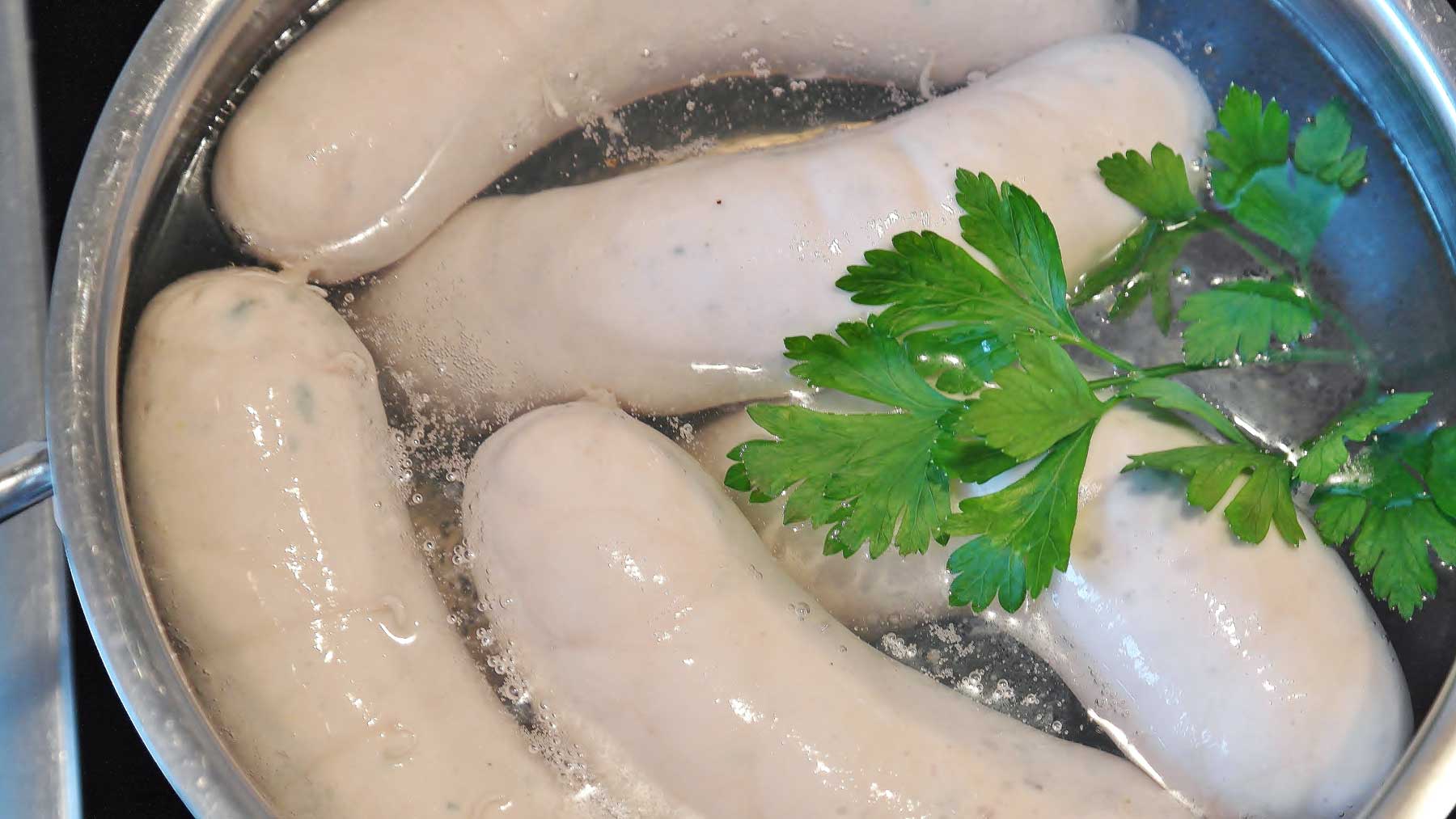 Some North Americans like frying them up in butter and onion. Those in the know are shocked at the thought of anyone frying them.

They are served hot, usually in pairs in a bowl of hot water (you don’t eat or drink the water they are served in). In restaurants, they are always accompanied with sweet mustard and bread pretzels.

The simmering makes the skins very tough. Consequently, you don’t eat the skin. There are two ways to accomplish this. With a knife, you split the sausage along its length. Then, you hold down the sausage with your fork, and use the knife to peel the skin off.

Pros, though, cut off both ends of the sausage, and hold the sausage and suck the meat out. You suck out one side first, then you turn it around and suck out the rest through the other end. This technique is called “zuzeln.”

They are mostly eaten in southern Germany. Some people refer to a “Weißwurstäquator” (“white sausage equator”) — an imaginary line roughly following the course of the Danube River that separates off the north of Germany where Weißwürste is not a common sausage. When it is served in other parts of Germany, though, it is eaten at any time of day. 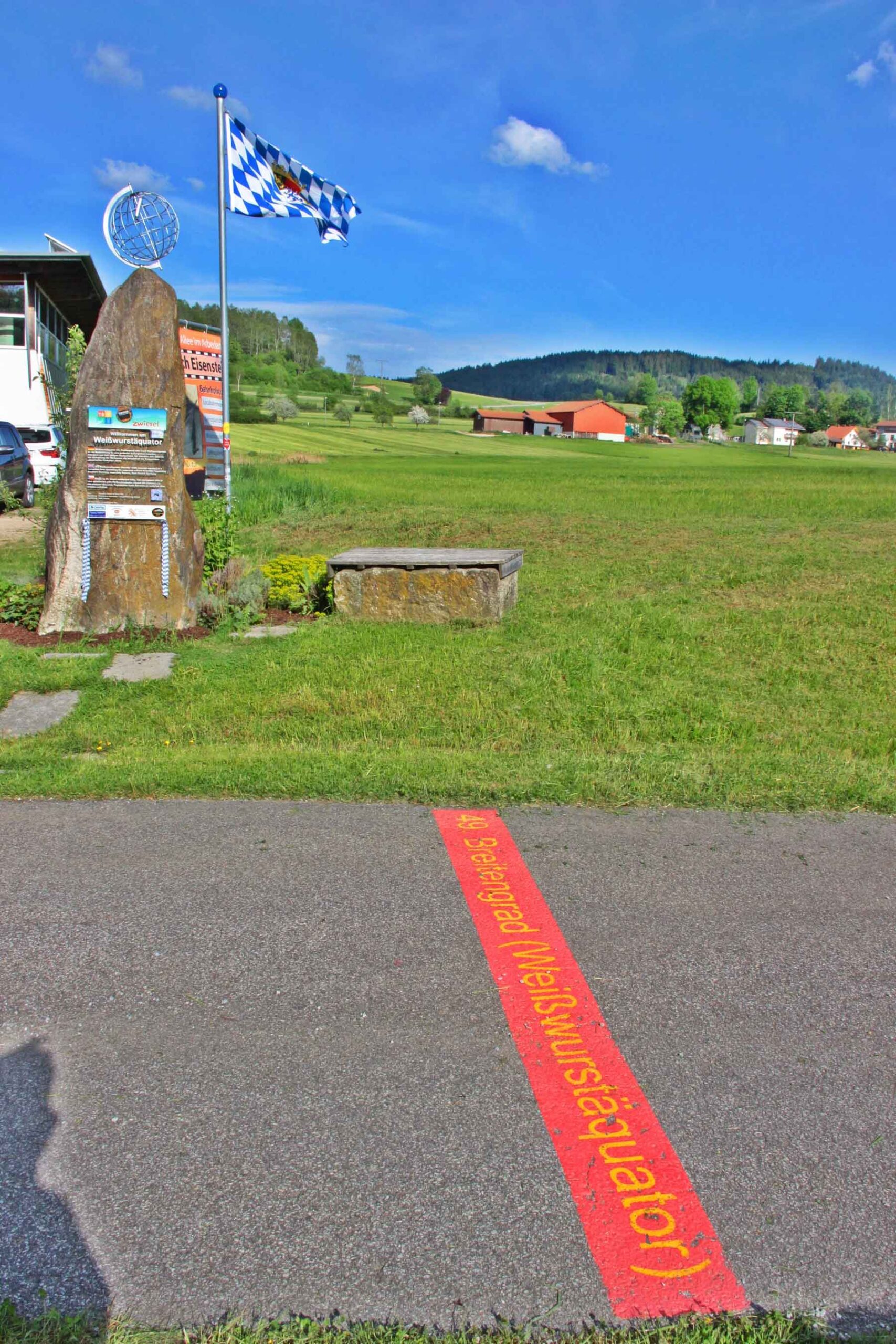 Weißwurst was reputedly invented by a man named Joseph Sepp Moser on 22 February 1857 in Munich at a restaurant / inn called “Zum Ewige Licht” (“At the Eternal Light”) on the Marienplatz. He both worked at the restaurant, and ran a butcher shop next door. He made a batch of sausages with thin skin, as he had reputedly run out of thicker sausage skin. Owing to the thin skins, he decided to boil the sausages for the customers in the restaurant, because he thought they would burst if fried. The dignitaries that he fed the sausages were delighted, and, a new dish was born!

According to a Regina Fanderl with Bavarian Radio 2, however, there’s actually little or no basis for any of the weisswurst creation story. She says in fact it’s possible it’s an adaptation of the French boudin blanc, and, that it existed way before the purported date:

“Somehow the story doesn’t seem very certain. A small inn “Zum Ewigen Licht” has existed on Marienplatz since ancient times, which owes its name to the fact that artificial light had to be constantly on under the dark arcades in old Munich. But the audience was mainly made up of the cab drivers who waited for customers on the main town square. So no talk of dignitaries!…

In addition, research by the long-time Munich city archivist Richard Bauer shows that the white sausage is probably much older than the coincidental product of a Moser Sepp. Bauer discovered an engraving from 1814 that clearly shows how veal sausages are tucked away in the Bockkeller of the Hofbräuhaus. Also, in an older butcher’s manual, it says that the white sausage is nothing more than a lighter variant of the rather thick-bellied Altmünchner Maibockwurst, which was devoured by the thousands during the bucking season in May.

Unfortunately, the opinion propagated in the magazine “Stern” [Ed: Stern magazine (No. 7, 2007)] cannot be ruled out that the supposed Munich specialty is based on a French sausage type, the “boudin blanc“.” [1]Fanderl, Regina. Die ersten Weißwürste werden serviert. Bavarian Radio 2. 22 February 2016. Accessed July 2021 at https://www.br.de/radio/bayern2/sendungen/kalenderblatt/2202-die-ersten-weisswuerste-werden-serviert-100.html

Richard Bauer, a Munich city archivist, says it is doubtful that Moser invented the sausage, but that his inn probably sold it:

“Whether the Moser Sepp at the “Ewigen Licht” was actually the first producer of the [weisswurst] served with strong beer cannot be determined, as there was no city chronicler next to his sausage kettle in Mardi Gras in 1857 and no patent was registered for the name. It is conceivable that at the reason for the creation of the Munich white sausage was not running out of bratwurst skins, but in truth the somewhat stretched skin of the already well-known Maibock sausage. In any case, that would suit the gloomy and ultimately dubious situation of the “Zum Ewigen Licht” pub, which is always inexpensive. In any case, the pub “Zum Ewigen Licht” played an important role in the German and ultimately worldwide acceptance of this Munich sausage specialty: in 1879, the inn was the only one to advertise in the appendix of a guide for the 6th meeting of German restaurateurs in Munich that it offered “fresh goat every day along with homemade sausages, white and pork sausages”. Since the “Ewigen Licht” at Marienplatz can be associated with the special Munich white sausage at an early stage and one cannot definitely say that Moser Sepp did not invent the white sausage, it should basically be left with the year 1857. Good legends also have a right to an anniversary.” [2]Bauer, Richard. Zum hundertfünfzigsten Jubiläum der Münchner Weißwurst. Munich City Archives. Undated. Accessed July 2021 at https://archive.ph/20090611233123/http://www.muenchen.de/Rathaus/dir/stadtarchiv/186762/weisswurst.html

In 2007, the reputed 150th anniversary of the creation, there were efforts in Munich to erect a statue to Moser in the Munich food market (“Viktualienmarkt“) in the centre of the city. But, the city rejected the proposal, as there was no solid proof that Moser had been the inventor of the sausage. [3]Lang, Jacqueline. Die neue Heimat der Weißwurst. Munich, Germany: Süddeutsche Zeitung. 21 February 2019. Accessed July 2021 at https://www.sueddeutsche.de/bayern/mitten-in-bayern-die-neue-heimat-der-weisswurst-1.4340280

In 2009, an application for legal Protected Geographic Indication status for the sausage name as “Munich white sausage” (“Münchner Weißwurst”) was rejected. The makers of the sausage in Munich wanted to legally define “Munich Weisswurst” as something made within Munich only, shutting other producers in Bavaria out. But a court ruled that a sausage with that name had already been broadly made throughout Bavaria for sometime, and that it was now a generic term:

“The Federal Patent Court of Munich has ruled that the term “Münchner Weißwurst” does not meet the requirements for registration as a geographical indication of origin within the meaning of Article 2, Paragraph 2, Letter b) of Council Regulation (EEC) No. 2081/92 of July 14, 1992, replaced by Council Regulation (EC) No. 510/2006 of March 20, 2006 for the protection of geographical indications and designations of origin for agricultural products and foodstuffs. (Ref .: 30 W (pat) 22/06)… The sausage product in question has its undisputed origin in the city of Munich. However, white sausages are offered under the name “Münchner Weißwurst” to a considerable extent outside that defined geographical area all over Bavaria, and especially especially in Old Bavaria and Swabia, as well as other federal states. [4]Der Lebensmittekontrolleur. Ausgabe 2/2009. 09_2_030_g.g.A. Weißwurst

Eventually frustrated with what they saw not only as a lack of interest in promoting the sausage from people in Munich, but also as attempts to grab it for themselves and shut others out, the Arberland butcher’s guild in Bodenmais, Regen, south of Munich, went ahead and proclaimed the 22nd of February each year to be “der Tag der Weißwurst” (Weisswurst Day.)

The sausage people in Munich were outraged about what they saw as a hijacking of their sausage by southern local yokels, but the day has taken off. [5]Giese, Sven. Tag der Weißwurst in Deutschland am 22. Februar. 21 February 2021. Accessed July 2021 at https://www.kuriose-feiertage.de/tag-der-weisswurst/ (See: Bavarian White Sausage Day)

This web site generates income from affiliated links and ads at no cost to you to fund continued research · Information on this site is Copyright © 2023· Feel free to cite correctly, but copying whole pages for your website is content theft and will be DCMA'd.
Tagged With: Bavarian Food, German Food, German Sausages