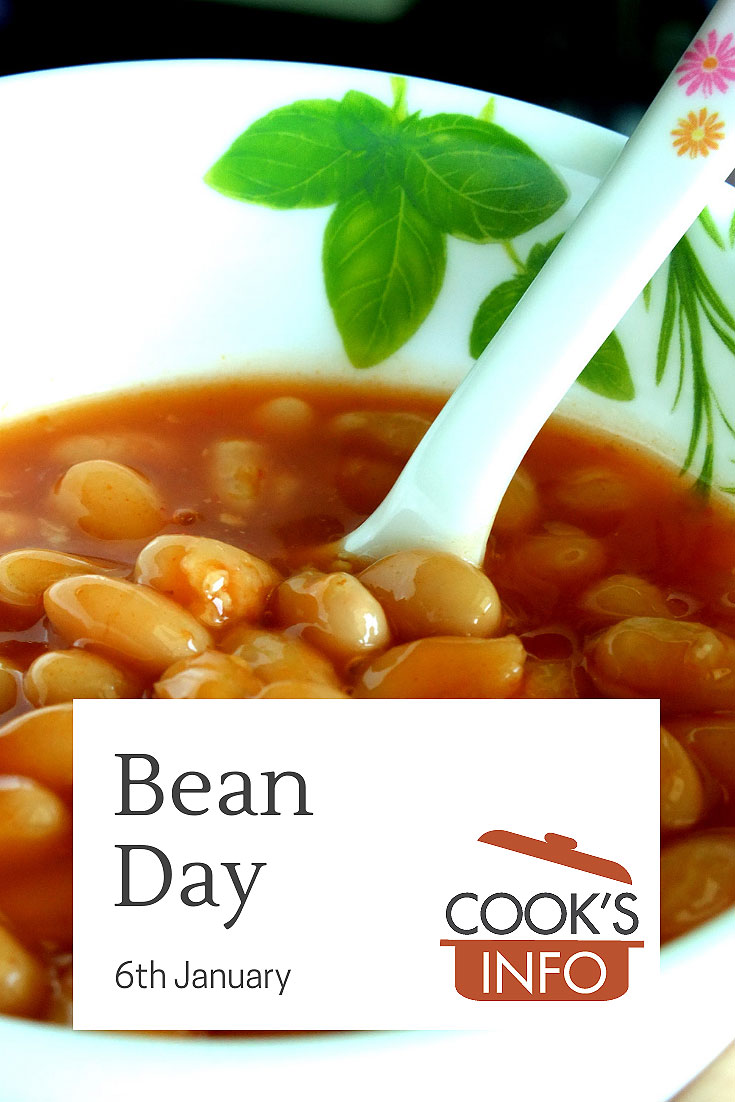 The 6th of January is Bean Day. Queue the musical fruit jokes!

If you’re in a rush today, you could mark the day by having some plain but honourable baked beans on toast from your favourite tin. Or, to be more adventurous, you could cook up a French cassoulet, or sample some bean burritos.

In the 1940s, Americans ate nearly 10 lbs of beans (about 4 kg) per person per year. After that, they went off beans, but now are slowly eating more of them again:

“Annual American consumption of dry beans peaked in the early 1940s at 9.6 pounds per person, before beginning a long decline. But after bottoming out at 5.5 pounds per person in the early 1970s, annual consumption has rebounded steadily and is approaching 8 pounds per person.” [1]Knutson, Jonathan. Trade issues affect dry bean market, too. 14 January 2019. Fargo, North Dakota: AgWeek. Accessed July 2019 at https://www.agweek.com/business/agriculture/4555554-trade-issues-affect-dry-bean-market-too

The top dry-bean producing state in America is North Dakota as of 2018.

Americans consume over 7 pounds of beans each year. Nearly 14% of the population is consuming the legumes on any given day. The top five beans in the U.S., in order of popularity, are pinto, navy, great northern, red kidney, and black beans…

Most of the crop grown in the States are produced in North Dakota, which accounts for 32% of production. The rest are grown in Michigan (17%), Nebraska (11%), Minnesota (10%), and Idaho (7%). This makes the U.S. the sixth leading country in bean production after Brazil, India, China, Burma, and Mexico.” (Figures as of 2018.) [2]AgHires. Americans Consume Over 7lbs. of Beans a Year. 5 January 2018. Accessed July 2019 at https://aghires.com/americans-consume-7lbs-beans-year/

When is Bean Day?

It should be noted that there’s some disagreement about when Bean Day actually is.

April date: Garrison, North Dakota, holds its Bean Day on 15 April. They say it’s held on this day (tax deadline day) because after paying taxes people will be eating beans for a while.

October date: Around the beginning of October each year, in Athens, Alabama, the Fire Department holds a Bean Day dinner every year to raise money for charity. They feed about 3,000 people.

November date: In 2003, the Governor of North Dakota (John Hoeven) declared Bean Day to be 3 November. North Dakota’s claim to authority in the field of beans, as it were, is that has for many years held the title of top producer of dry edible beans in the Union, and still is as of 2018 (see above).

This web site generates income from affiliated links and ads at no cost to you to fund continued research · Information on this site is Copyright © 2023· Feel free to cite correctly, but copying whole pages for your website is content theft and will be DCMA'd.
Tagged With: Beans