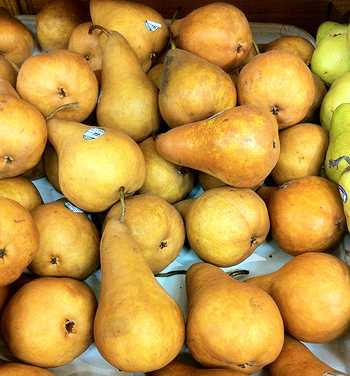 Bosc pears have the classic pear shape — elongated, bird-like neck atop a full, bell-shaped base. Their russetted skin is browny-gold. Inside, the flesh is creamy-white with an almost spicy taste at times.

They are sold firmer than Bartletts or Anjous because they can be harvested and eaten earlier than either. Bosc pears develop their juiciness and flavour very early in the ripening process. Because of this, they hold their shape very well when cooked.

In the United States, they thrive in the Northwest states such as Oregon and Washington.

To tell if a Bosc is ripe, press the stem to see if it goes in a bit. Because they are firmer than other pears, you won’t feel as much give as you would with other pears. Sometimes under the russeting there will be a green cast that will turn more yellowish as the fruit matures, but not always, so colour is not a reliable indicator of ripeness. The best indication of ripeness is to smell them: they should be fragrant.

They are very good cooking pears and hold their shape well.

As with all pears, remove skin before cooking as it will go tough. Dip peeled pears in lemon water to stop the flesh from browning.

Commercially, Bosc Pears are good keepers. They can keep in store houses for up to 6 months. At home, store in a plastic bag in the fridge for up to 5 days.

Clementine Paddleford, food expert for the paper, told in her article how ‘Several of these women put the baked pears up in syrup [with] spices for an outstanding dessert, one that has created so much comment by visitors by the community that a pear grower conceived the idea of selling part of his crop canned in this fashion. This packer borrowed recipes from his neighbors and carried them to Oregon State college to see Professor E.H. Weigand, a pioneer in developing Oregon’s rare fruit specialties.

The professor liked the baked pear idea and undertook a series of tests baking them in every type of oven and in dozens of different ways. The college turned out 150 samples and the packer got up a jury of men and women to decide on the best. The choice was unanimous on one jar, the jar the packer sells today by mail.” — Pears Make Headlines. Corvallis, Oregon: Corvallis Gazette-Times. Tuesday, 1 August 1939. Page 3, col. 4.