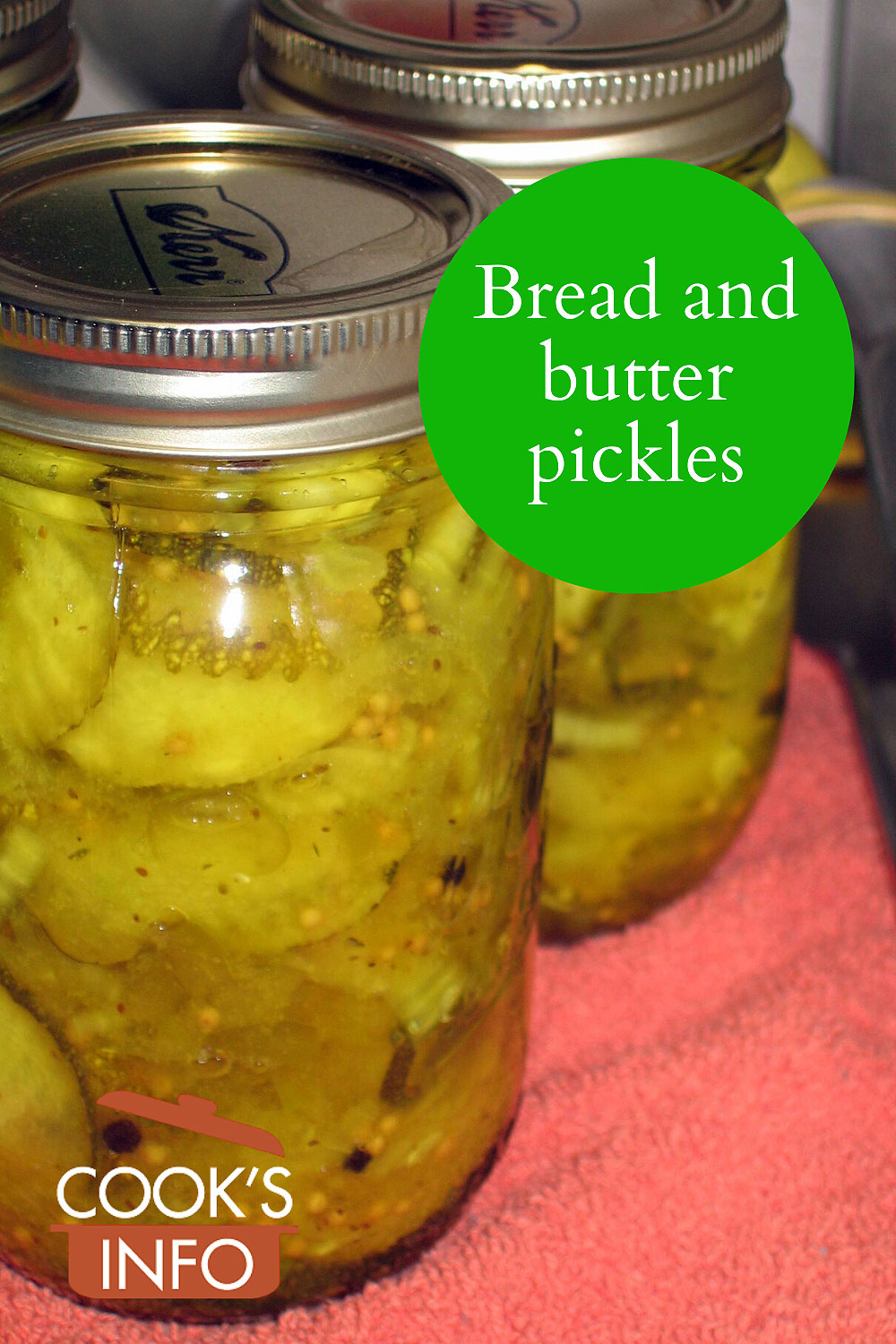 Bread and butter pickles are pickles made from pickling cucumbers about 3 to 4 cm wide (1 ½ inches), sliced thinly cross-cut wise to be 3 to 6 mm thick (⅛ – ¼ inch.)

The pickle slices are shiny green in colour, sometimes with a tinge of yellow. They should be crunchy in texture, with a very sweet taste, which ideally should be balanced with a tangy tartness.

They are popular in hamburgers. They are also used inside sandwiches, or served as sides with sandwiches, or as additions to relish trays. They are used chopped as ingredients in dishes such as potato or other bound salads.

The slices are sometimes referred to as “pickle chips.” Commercial slices are often cut wavy, though Mrs Fannings, the original brand, are not.

Commercial versions are usually made from cucumber. Home-canned versions are as well, though zucchini can be used as well to good effect.

To make bread and butter pickles, the pickles are sliced and mixed with pickling salt (some recipes will add sliced onion at this stage.) The slices are let sit for a few hours or overnight to allow the salt to draw excess moisture out of the slices.

Some recipes have you then discard the juice drawn out, and rinse the salt off the slices; other recipes don’t have you do this.

Other ingredients such as vinegar, sugar, and seasonings are then added. There are now also some sugar-free varieties which use alternative sweeteners.  Seasoning in the pickling mix can include celery seed, mustard seed, turmeric, etc. (In contrast, other sweet pickle recipes tend to use spices such as cinnamon, cloves and allspice.) When home canning, the vinegar used must be 5% acidity or higher.

The vinegar mixture is brought just to a boil, then poured over the pickle slices in jars.

For safe shelf-stable storage at home, the jars must be hot-water bath processed. There are also some “refrigerator” versions of bread and butter pickles that skip the hot water processing step; these are not safe for shelf-storage and must be stored all the time in the fridge.

Bread and butter pickles do not require a long aging time before they can be eaten.

Here is a quality, safe, lab-tested bread and butter pickle recipe on the site for the National Center for Home Food Preservation. 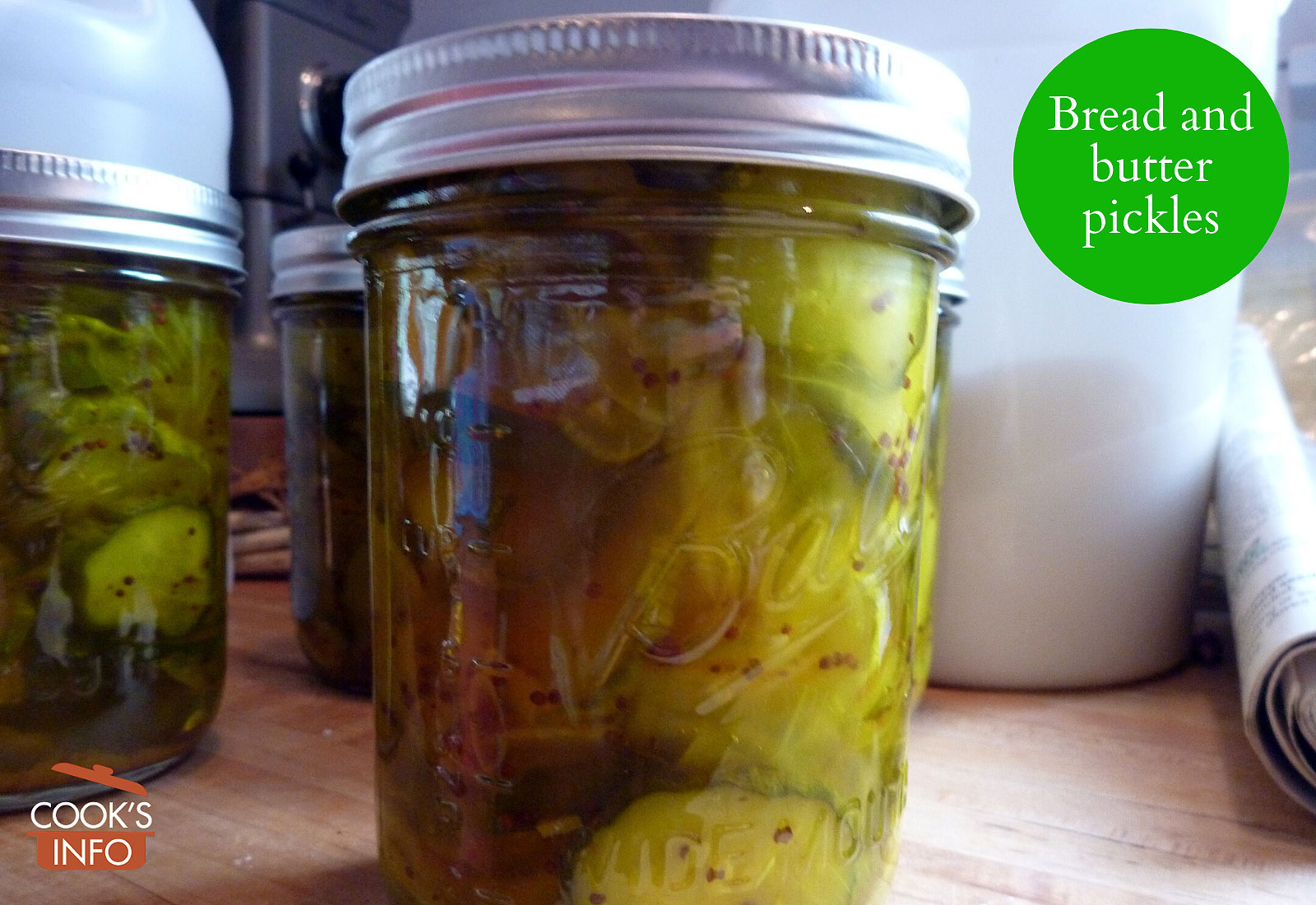 It appears that bread and butter pickles may have originated with an Omar and Cora Fanning in Illinois. They used a recipe which had been in Omar’s family for a few generations, so it may have been a known recipe in their area. Omar and Cora, though, commercialized the pickle with the “Bread and Butter” name in the early 1920s, applying for a trademark on the logo for the pickles in 1923. Bread and butter pickles became quickly popular in the 1920s, alternately being marketed as “old-fashioned” and “the latest thing.” Other brands such as “Home Garden” elbowed their way onto the market as early as 1925.

“In case you have ever wondered where they got their name, GFA Brands, which owns Mrs Fannings, has supplied the background. In the early part of the [Ed: 20th] century Cora and Omar Fanning of Streator, IL found themselves short on cash. What they had going for them, however, was a reliable crop of cucumbers and Mrs. Fanning’s great recipe for sweet & sour pickle chips. Mrs. Fanning worked out an agreement with a local grocer, who gave her groceries — including bread ‘n butter — in exchange for the pickles. The name stuck, and has been used by many companies … Although Mrs. Fanning’s pickles began in the Midwest, they are not widely distributed there, but are more readily found in the Eastern, Southern and Western states.” — Feingold News. Feingold Association of the United States. Alexandria, Virginia. October 1996. Page 5.

“TWIN CITY PEOPLE in Other Cities. Mr. and Mrs. Omar Fanning were here from Streator Thursday, calling on relatives. Mr Fanning will go east today to close a deal with a large corporation for the sale of his pickle business in Streator. Among all the former Sterling people who have succeeded unusually well in other places, Mr. Fanning’s success has been unique. He engaged in the business of raising cucumbers at Streator a number of years ago, and gradually developed a pickle business in order to use the small cucumbers that had been a waste product of his greenhouses. In time the pickle business became the main business and his products have met with immense sales all over the United States. A business regarded as in the millionaire class thus grew out of the thrift that prompted Mr. Fanning to make use of the waste product, and it is said that an old receipt for making pickles that had been in his family for two or three generations had quite a lot to do with the popularity of the “Bread and Butter” pickles which he originated and put on the market.” — Sterling Daily Gazette. Sterling, Illinois. 11 June 1926. Page 2.

“He [Carroll Smith] is making an introductory offer which will appeal when he sells three cans of those delicious Bread and Butter pickles at $1.08, They are the best of the kind, the Market Basket Lady has ever tasted.” — “The Lady with the Market Basket” column. Hutchinson News, Hutchinson, Kansas. 3 July 1925. page 5.

“Pickles – Fanning’s Bread and Butter Pickles. You will like these on any occasion, per jar. 45 C.” — Ad placed by the Brady Street Basket grocery store. Davenport Democrat and Leader. Davenport, Indiana. 17 July 1925. Page 15.

“BREAD AND BUTTER PICKLES – You don’t know what you are missing if you have not tried them. Jar. 41 C” — Ad placed by Freadrich Bros. Master Grocers. The Lincoln Star. Lincoln, Nebraska. 23 October 1925. Page 15.

“Our favorite of the line is a bread-and-butter pickle, a blue-ribbon winner at the Trenton, New Jersey, Fair in 1949. One long, deep whiff and we are linked back with a thousand associations. A Kansas garden among the sprangly cucumber vines, the August sun bathing the body, beating iron-hot on bent shoulders. The little cucumbers are the only ones to go into the basket for Mom’s bread-and-butter pickles. In the shade of the vine-covered back porch, the cucumbers are sliced tissue-thin, each slice like the next. And that’s exactly Mrs. Levinson’s way. ‘So right,’ she tells us when the pickles are used in a sandwich.” — Paddleford, Clementine (1898 – 1967). Food Flashes Column. Gourmet Magazine. July 1951. 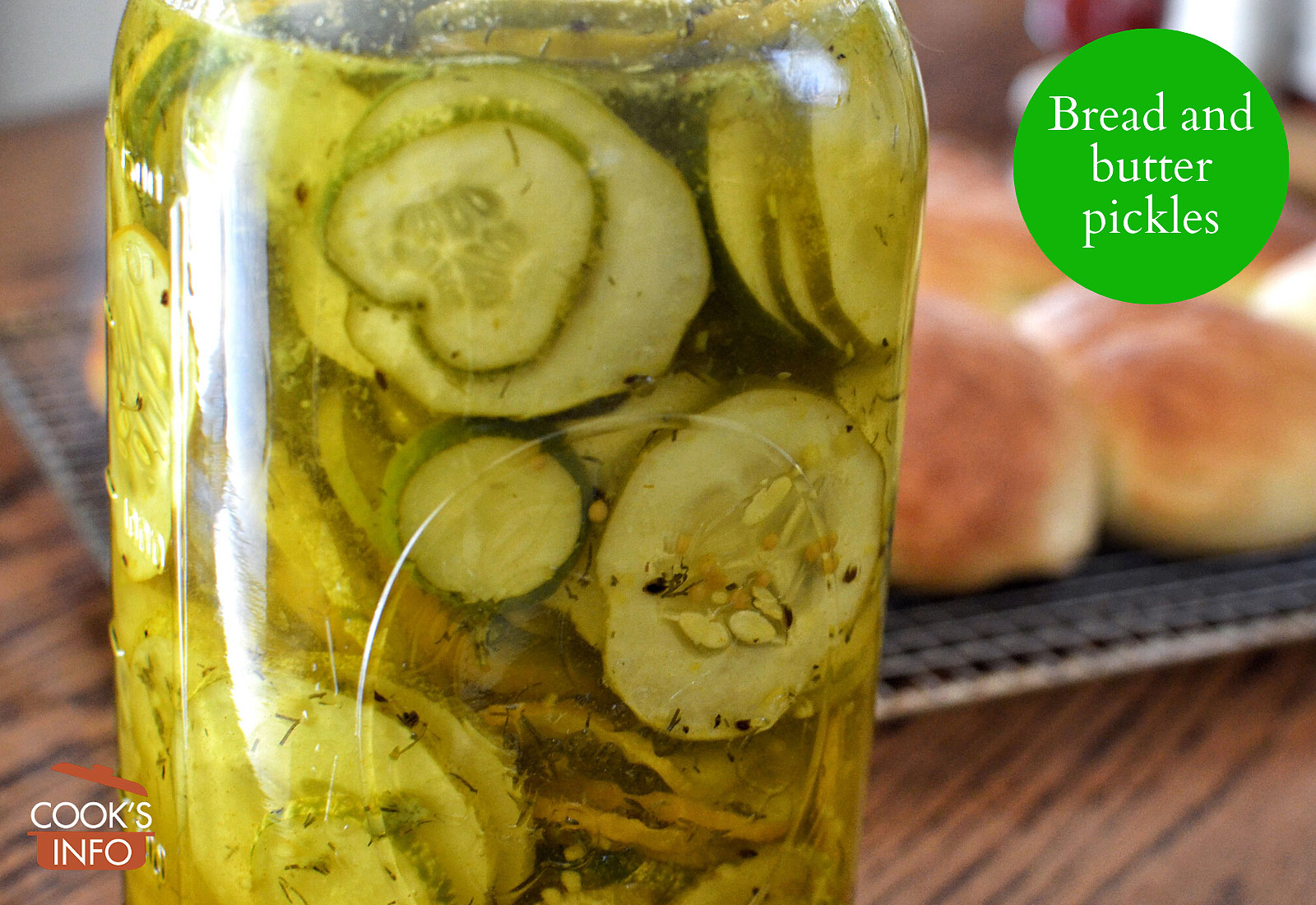