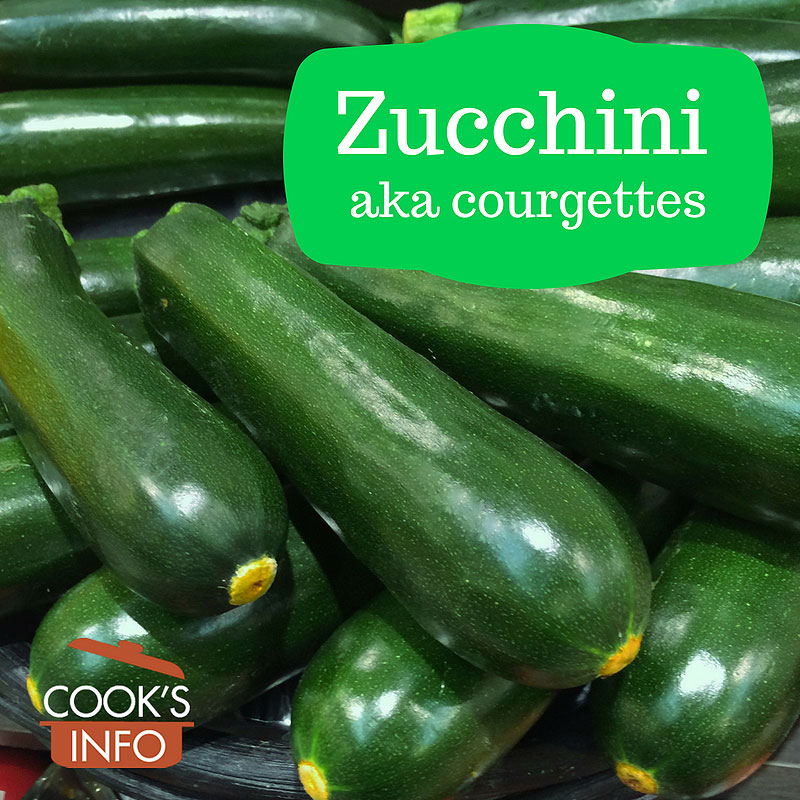 Zucchini (aka courgettes) are a member of the squash family. They are classified as summer squash.

Zucchini don’t really have a great of flavour by themselves; everything hinges on their getting flavour from how you cook them. When people write: “Zucchini’s mild flavour combines well with other flavours”, that’s code for “dig out your best seasoning ideas, Bernice…”

Most zucchini has soft spines along its vines that can irritate most people’s skin. For this reason, people tend to wear long sleeves and gloves while harvesting them. Some varieties have been developed that have practically spineless vines, but some critics say the lack of spines can make the vines a bug highway leading to lower quality zucchinis.

Medium to small zucchini have a more delicate flavour and are the most tender, so buy these whenever possible. The larger, older ones get a bit more of an acrid or bitter after-taste. Not much, so you’d mind, but if you’re looking for it you can detect it, especially as there’s not much of any other taste.

If you are going to be using zucchini raw as crudités or on a veg and dip platter, definitely go for the smallest you can get, as they are more tender, and won’t have any bitter after-taste. If, however, you are doing stuffed zucchini: get medium to large ones. They are easier to work with, and, when cooked, they will taste great.

To prepare for use, scrub your zucchini lightly and rise under cold water. Trim off both ends. There is no need to peel or remove seeds. (If there is a great deal of very mature seeds, then the zucchini might be quite old, and you might need to use it as you would a marrow.) Slice, chunk or grate according to the recipe you are using. 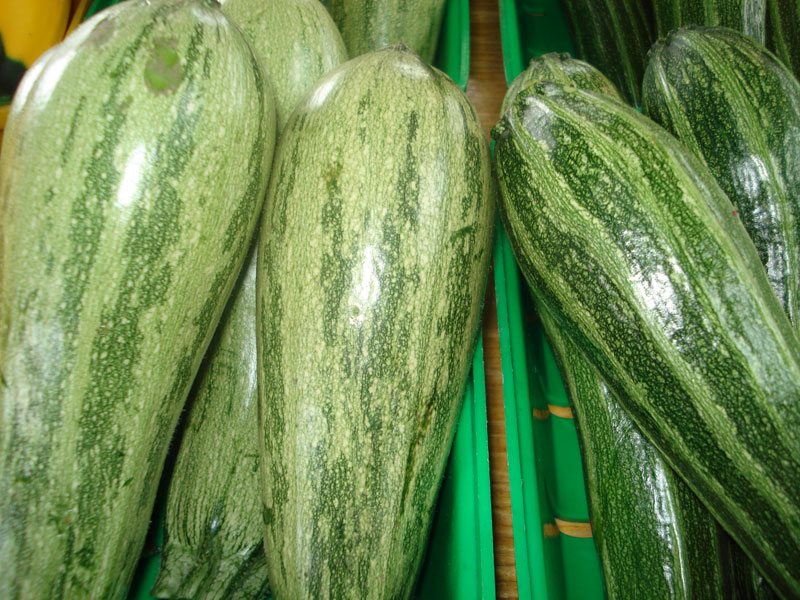 A zucchini is fresh and young if when you bend it, it snaps and breaks rather than just bend.

Occasionally a gardener will have a zucchini plant that produces bitter fruit. Bitterness in summer squashes is not caused by environment, but by a single gene.

It can emerge because of cross-pollination with wild members of the cucurbit family, or it can just be a rare, “occurring on its own” mutation. It won’t be noticeable in the fruit produced that year, but in fruit produced from seeds from that fruit. Discard any zucchini that are really bitter, and don’t bother saving the seed, if you were going to.

Zucchini has a very high water ratio, so it doesn’t need to cook very long. You can boil, steam or microwave it on its own, but normally it is used in combination with other ingredients. 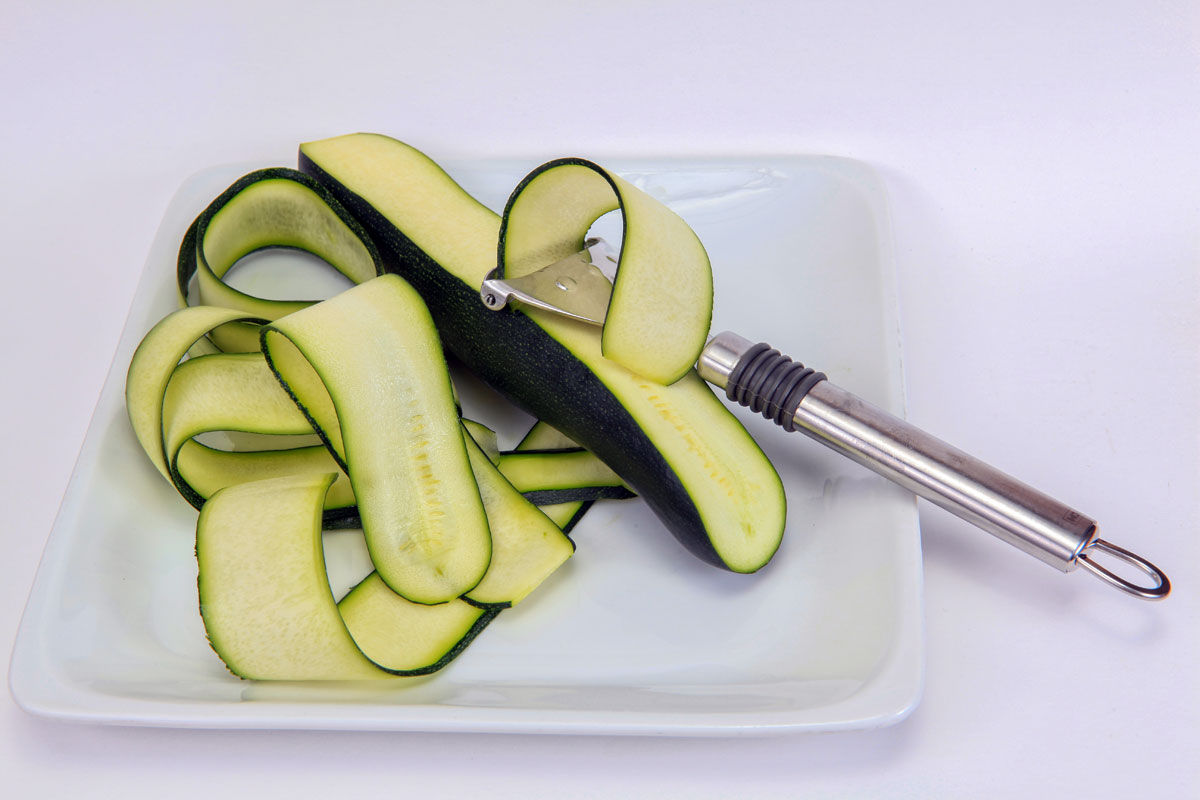 Raw zucchini has 13 calories in half a cup. It also has folic acid, and a good amount of potassium.

Between November 1981 and December 1982, 21 cases of food poisoning were caused in Queensland, Australia by bitter zucchinis. Even a very small amount (about 3 g, less than ¼ oz) was enough to bring on symptoms within 1 to 2 hours. Though no one died from it, it caused stomach cramps and diarrhoea for up to three days. The zucchini in question were probably zucchini from the Blackjack cultivar.

Refrigerate for up to 5 days unwashed in crisper or in a plastic bag (preferably one of those ones with holes in it).

For freezing, there is no need to blanch or peel. Wash. Shred, let drain in colander (even squishing a bit to get excess water out, otherwise it will go very soggy in the freezer.) Place in freezer bags, freeze for up to 6 months.

Zucchini originated in Central America, and were brought back to Europe by the Spanish.

The Italians patiently bred them until the zucchini we know today developed.

They brought their fondness for zucchini when they immigrated to North America, and also to Australia when they began migrating there in the 1950s. [1]”Italian migrants brought zucchinis to Australia in the 1950s…” Zucchini. Victoria State Government: Better Health Channel. Accessed August 2018 at https://www.betterhealth.vic.gov.au/health/ingredientsprofiles/Zucchini

Two women in an airport waiting lounge start chatting while waiting for their flights. One woman says that she’s from such a small town that no one ever locks their cars — except in the summer. The other says, “I suppose crime must increase in the tourist season”. “Oh, no,” says the first woman — “It’s just that otherwise someone might come and fill it with zucchini.”

Italian immigrants brought their liking for zucchini, and their word for it, to North America, and popularized both.

The Italians called a zucchini a “zucchino”. Zucchini is the plural. Zucchini is actually already plural in Italian, but the English plural of it become “zucchinis” anyway, as English-speakers did not realize the word was already plural.

The British and the French call zucchini “courgettes”.

This web site generates income from affiliated links and ads at no cost to you to fund continued research · Information on this site is Copyright © 2022· Feel free to cite correctly, but copying whole pages for your website is content theft and will be DCMA'd.
Tagged With: Italian Food, Summer Squash