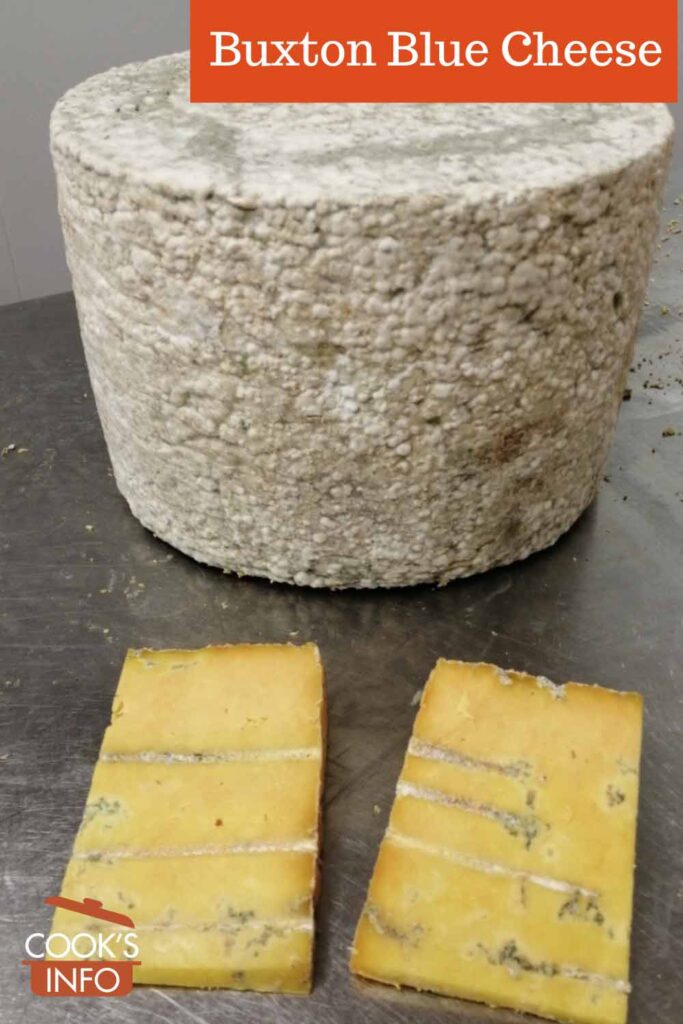 It is cylinder shaped, with a tangy but mild taste. The more the cheese ages, the creamier the texture gets. The rind is edible.

As of the 2020s, the sole maker of it is Mary Button of the Staffordshire Cheese Com­pany in Cheddleton, Staffordshire, who began making it in 2017 when she purchased the Staffordshire Cheese Com­pany in that year. In 2019 she said, “I have a fantastic team. We are the only producers of… Buxton Blue cheeses.” [1]Butterfield, Gareth. Why Mary from the dairy has become the area’s big cheese. Nottingham, Nottinghamshire: Derby Telegraph. 9 May 2019. Accessed October 2022 at https://www.derbytelegraph.co.uk/in-your-area/staffordshire-cheese-company-big-award-2847847

Buxton Blue is made from pasteurized cow’s milk that comes mostly from the areas of Derbyshire, Nottinghamshire and Staffordshire. (The PDO specifications allow the milk to come from Shropshire and Cheshire during shortages.)

To make the cheese, annatto, a starter culture and Penicillium roqueforti are added to the milk. Then a bit later, rennet is added to curdle the milk. When the milk has curdled, the curd is cut and dropped into the curd tray. After stacking and cutting the curd further, it is milled, and salt added. It rests (“dwells”) for 10 minutes to drain and is then milled again.

The milled curd is then packed into cloth-lined stainless steel cylindrical moulds.  The cheeses are then pressed in the moulds for up to 30 minutes. After this, the cheeses are turned out of the moulds, and let age for 5 to 6 weeks. During aging they are turned several times, as well as being pierced up to four times to let air in for blue mould development. After the aging, they are then moved into refrigeration and are ready for distribution.

Theories came fast and furious at Food File’s cheese tasting to mark the launching of the East Midlands’ newest delicacy, Buxton Blue cheese. And in a way the tasters were right. Buxton Blue is a bit like all three. Most of us ranked it with Blue Stilton, but without the strong aftertaste. Buxton Blue’s aftertaste is mild, creamy and unobtrusive.

The cheese is actually made at the Hartington Creamery in Dovedale and owes its name to the fact that makers J.M. Nuttall have a Stilton creamery at Buxton in Derbyshire. Seventeen gallons of milk, years of experience, and a couple of months’ conscientious attention go into each 8kg cheese.

Milk is first pasteurised then poured into vats where a starter culture and rennet are added. Curds form from the milk solids and after a couple of hours these are cut and laid in troughs to allow the liquid whey to drain away. The curds are milled, weighed, salted, and placed in stainless steel cylindrical moulds for three or four days. and further draining reduces the cheese. Moulds are removed to reveal the traditional truckle of cheese which is smoothed down and bandaged. It’s also turned regularly in a coating room to ensure even temperature. During the ripening, those blue veins appear to give the cheese its distinctive look. 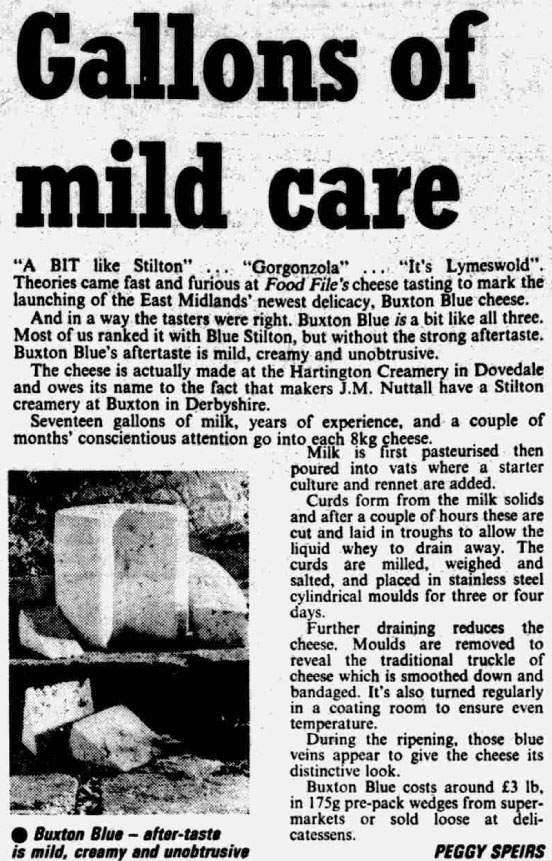 “Buxton Blue was launched at the Nantwich Show in 1990 and is now nationally available. This mild-tasting cheese is hand made at the Hartingdon Creamery in Dovedale, Derbyshire to a traditional recipe and has full and smooth texture with warm russet colour and delicate blue veining.” — Cheddar, the cheese of style. Grimsby, Lincolnshire, England: Daily Telegraph. 15 October 1991. Page 5, col. 3.

At an unknown date, the Staffordshire Cheese Com­pany in Cheddleton, Staffordshire (founded 1994) added Buxton Blue to its product line. The cheese was preserved by Mary Button when she purchased the company in 2017, and as of 2022, was still producing it.

Some previous producers would wrap the cheeses in cloth (aka “bandage them”) during aging.

“The cheese is actually made at the Hartington Creamery in Dovedale and owes its name to the fact that makers J.M. Nuttall have a Stilton creamery at Buxton in Derbyshire.” — Speirs, Peggy. Gallons of mild care. Nottingham, England: Nottingham Evening Post. Wednesday, 29 May 1991. Page 8, col. 3.

This web site generates income from affiliated links and ads at no cost to you to fund continued research · Information on this site is Copyright © 2022· Feel free to cite correctly, but copying whole pages for your website is content theft and will be DCMA'd.
Tagged With: British Cheeses, Protected Designation of Origin