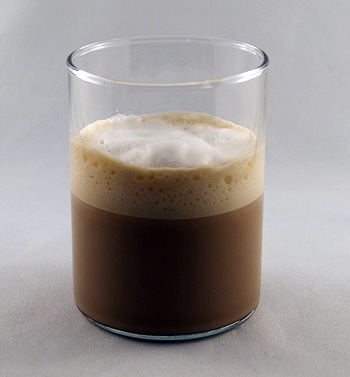 Cappuccino is an Italian milky coffee drink, made from espresso coffee and hot milk, topped with a generous amount of foamed milk with very fine bubbles in it. It often has a small amount of sugar added to it by the drinker.

It is, classically, served in a squat coffee cup with a handle. In Italy, a dusting of cocoa powder may be offered. In North America, you may be offered either cocoa powder, or cinnamon (purists say no to the cinnamon.)

In Italy, cappuccino is sold at bars and latterie (dairy stores.) There, it is drunk in the morning for breakfast, often with a croissant, a brioche or another sort of pasticcini for a light breakfast.

Anyone drinking a cappuccino after 11 am in Italy stands out as a tourist. In North America, cappuccino is served any time of day. Recently, Europeans outside Italy, especially northern Europeans, have started to adopt the North American habit of drinking it whenever.

Ratio of coffee to milk in Cappuccino

The World Barista Championship Official Rules and Regulations state that cappuccino is prepared with one (1) single shot of espresso, textured milk and approximately 1 centimeter (½ inch) of foam depth (assessed vertically), and that a traditional cappuccino is a beverage between 150 to 180 mL in total volume (5 to 6 fl. oz.). [1] Their definition follows that of the classic one, with proportions of 1 part espresso to 5 parts milk. If you see elsewhere suggested proportions other than that, they reflect either a writer’s personal preferences, or misconceptions.

North American coffee chains usually serve the drink as a 12 to 13 oz drink or larger. The criticism with them is that there is too much milk in them, and not enough espresso and not enough foam for the amount of milk. Some critics say that the Starbucks coffee chain makes their cappuccinos so large, because larger drinks carry higher profit margins. Starbucks does offer a cappuccino with less milk in it, called a “short”, at a total size of 240 ml / 8 oz, but you have to ask for it; it’s not on the menu. It offers a taste closer to the original; it’s also a bit cheaper.

Some say full-fat milk is the best to use, but once you get the hang of frothing, a semi-skimmed milk will work just as well. It always takes a few attempts at frothing to get the hang of it. It is best to keep the nozzle just below the surface of the milk. This is more effective than plunging the nozzle halfway into the milk, which is a mistake often made by beginners. Don’t try to froth a full jug of milk, because as it froths it will expand out of the jug and make a mess. Have the jug of milk about half full.

To make cappuccino, you must have access to an espresso machine to make it, so you can dismiss any myths about the coffee’s origins before 1900.

Cappuccino existed in its current form by the 1950s.

By the mid-1990s, North American coffee chains had adopted Cappuccino as a mass drink to sell, and freely adjusted the proportions / idea of what a Cappuccino was.

A Cappuccio in Italian is a hood. Cappuccini is the Italian word for the Capuchin monks, who wear hoods. The word cappuccino might be referring to the colour of their habits, which is similar to the colour of the espresso and milk mixture. Other people think that it might be referring to the way these monks shave their heads (the tonsure) — how on top of the coffee you often see the dark ring of the coffee (the hood folded down), around the white foam (their bald spot.)

This web site generates income from affiliated links and ads at no cost to you to fund continued research · Information on this site is Copyright © 2022· Feel free to cite correctly, but copying whole pages for your website is content theft and will be DCMA'd.
Tagged With: Espresso, Italian Food