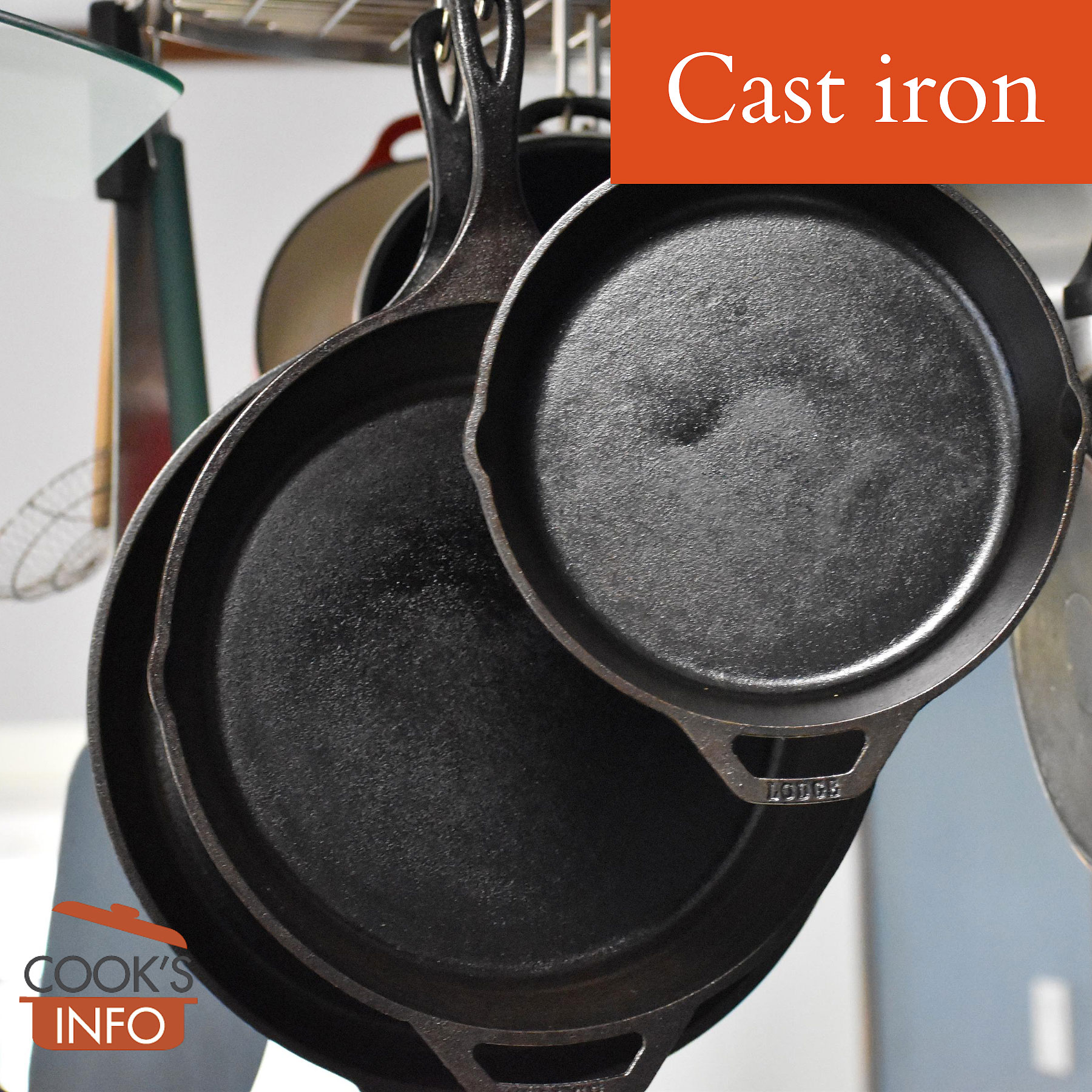 Cast iron has a place in the hearts of North Americans, because it’s what the pioneers carried with them across the continent. It’s not the lightest material to make cooking utensils out of, but it was indestructible.

What is cast iron

Cast iron is actually an iron and carbon alloy, with anywhere from 2 to 4 ½ percent carbon in it, 5 to 3 percent silicon, and small amounts of manganese, phosphorus and sulphur. The carbon makes the alloy brittle, which is why it can’t be wrought, as iron often is, but must be cast instead to shape it. It is poured into sand moulds, then when solidified, the sand coating is blasted off and the rough edges removed.

Typical cast iron cookware utensils include frying pans, griddles, and Dutch ovens. Some cast-iron frying pans are made up to 60 cm wide (2 feet).

The type of plain cast iron popular with Americans and Canadians is somewhat less popular in the UK. There, when some people think cast iron, they automatically think coated or enamelled cast iron, as in the “le Creuset” brand of cookware.

Non-enamelled cast iron becomes non-stick after it is seasoned. When cast iron items are brand new, they are grey. Ideally, a well-seasoned one after many years ends up being slicker than black ice. If stuff sticks, it just means it is not seasoned properly. When the finish is damaged on non-stick pans, they are garbage. When the finish is damaged on a cast iron item, you just re-season it.

The classic cast-iron cooking vessel that exemplifies the category is the cast-iron frying pan. Fans of cast iron say that however many other kinds of frying pans they have, it’s the cast iron they always reach for first. Many feel that cast iron “grows and develops” with them in the kitchen over the years. It has just about the longest lifespan of any cookware that we know of so far. It only rarely turns up at yard sales; it seems to get handed down to other relatives instead. Yet, despite its longevity, cast iron is very inexpensive.

Cast iron can be used both on the stove top and in the oven. Don’t, however, put pieces with wooden handles in the oven. Handles made of cast iron will get very hot whether on the stove or in it, so always handle them with pot holders.

The future of cast iron

As of 2000, cast iron was falling out of fashion and was only 10% of the cookware sold in America. This may have meant it was going out of fashion, or that newer Americans didn’t have the affinity for it, or, it that there were a lot of cast iron pans out there that just didn’t need replacing. Owing to falling sales and competition from abroad, the only cast-iron cookware maker left in America, as of 2007, was the Lodge Manufacturing Company in South Pittsburg, Tennessee. Smaller craft ones have since sprung up again.

People think of cast iron cookware items as indestructible, and they are close to it. But extreme heat or extreme changes of temperature can crack cast iron.

Seasoning is the process done to new cast iron frying pans to help them start their life journey on the road to becoming non-stick. Describing it that way, though, as most sources do, is misleading. That is just the start of the seasoning process: it then continues as you cook with the pan. After you do the initial seasoning step, it is very important to cook the right kinds of things in the pan the first few times out (more below.) When a cast iron frying pan is seasoned, it will be jet black.

“Preseasoned” (as in “already seasoned”) pans are meant to give you a head-start on seasoning them, though they can’t compare to pans that have been in use for sixty years. Cast iron with enamel surfaces (e.g. Le Creuset) don’t need seasoning.

The principle behind seasoning is that cast iron surfaces are porous with microscopic cavities in the surface. Fat fills these cavities, making the surface smooth so food has a hard time clinging to it. It also prevents water from getting in and causing it to rust. On top of that, a layer of polymerized oils forms.

Some people have a very hard time getting cast iron frying pans seasoned and get frustrated. They get it part way there, and then the seasoning comes off again, leaving the bare metal, even when they follow the rules, and even if they don’t wash it at all.

It could be that, the first few times out, these people are trying to cook quite light things in it — say a pork chop or scrambled egg — at a time when the polymerized surface still needs reinforcement from the items being put in the pan. Some speculate that for the seasoning to really take hold, for the first few times you actually use it, you need to cook in it the traditional cast iron fare such as sausages, or bacon, etc. — foods high in fat or grease, recipes that start off calling for “½ pound of lard.” Or, use it for sautéing.

Another reason that seasoning can disappear is it’s a young seasoning, still vulnerable to what you put in it, and if you cook something acidic in it, such as something with a lot of lemon juice, vinegar or tomatoes in it. This can cause a young, thin seasoning layer to dissolve.

Before you start seasoning a pan, remove any labelling attached to the pan. Then scrub the pan to get rid of any surface coating designed to stop it rusting during shipping, storage, in the stores, etc, then make sure the pan is bone dry before you start to season it (both these stops are only necessary if the pan is “new new”, as in, from the store.)

There are two seasoning methods, stove top and oven. Don’t season cast iron frying pans with wooden handles with an oven method, unless the handles come off easily (if so, then you may remove the handle and do oven seasoning.)

Most seasoning methods call for oil these days. This may be a modern, overly health-conscious voice speaking. Old timers just say use lard or bacon fat, and it won’t leave a sticky surface as oil can.

Some say for any of these methods, bake the pan upside down.

Heat a burner on the stove. Place pan on it for 1 to 2 minutes, until it is pretty hot. While still on stove burner, and stove burner still on, brush the inside of the pan lightly with an oil (corn oil, canola, safflower, vegetable), or lard, shortening, bacon fat or dripping. Leave pan on burner for a few more minutes. Remove from burner; let cool; wipe off excess oil.

Many people say to never wash or even rinse cast iron with water; that you should just wipe clean with paper towel instead. Others say there’s nothing wrong with a rinse of water, and that even a little detergent is fine for a well-seasoned pan. Some like to compromise and say rinse with hot water, scrape as needed. Many grandmothers who cooked in the cast iron long before anyone either side of the debate was born would have blanched at the thought of not washing their cast iron pans; they got washed like everything else, and with plenty of soap. It’s only recently that some people have started to say not to use soap, but generations have.

Some people like to oil their cast iron pans after each use, put them on a burner of the stove, heat for a few minutes, let cool, wipe off excess oil with a paper towel, then store. But it’s certain that grandmothers didn’t have time to put such effort into cleaning and putting away a frying pan. They washed it, dried it, and stuck it in the oven.

If anything does stick, and you don’t want to use a detergent, you can try using table salt as a “scouring powder.”

Cleaning no no’s that everyone agrees on: no dishwasher, no soaking, no cleaning with steel wool pads. And don’t put them away until completely dry, unless you have a gas oven with a pilot light and store them in there.

Sometimes people get a cast iron perfectly seasoned and then someone else cooks something in it, and the black seasoning starts to flake off.

The black flakes that come off aren’t seasoning, they’re food crud that was burnt on. It was the change in what was cooked in the pan (say, a tomato sauce) that finally dissolved the bond enough to cause them to come off.

To eliminate the loosened black flakes, put a coat of oil in the pan, heat it gently till warm, let cool till you can work with it, then wipe out oil and any more black flakes with a paper towel or dish brush, trying to get off any more black flakes that are going to come off anyway. Repeat a few times if you’re not satisfied yet; you can even try, when you go to clean out the oil, sprinkling in some table salt first to act as an abrasive. Then reseason.

Or, put the pan in then oven on high heat for 45 minutes. Turn off oven, let the pan cool in the oven. When cool enough to handle, scrape off any loose black flakes, then coat with a vegetable oil inside, then let dry. Season again before using.

A favourite place to store cast iron pans was inside a gas oven — the pilot light would help them to dry thoroughly and avoid rusting. Some people still store theirs in electric ovens, just out of habit because that is what their family did.

Sand them with steel wool or a copper scouring pad until smooth; feel free to use scouring powder to help. Get all the burnt crud and rust off.

Some people have taken theirs to their friendly-neighbourhood monument maker, and had them sandblast the pans clean.

Don’t put directly in a fire for a long time; it may crack (some people have tried this as a way to clean very old ones in bad shape.)

While it’s true that cast iron pans impart some trace amounts of iron to the food cooked in them, it’s not certain yet that it’s actually in a form easily absorbed by the body. Consequently, the recommendation is that if you are iron-deficient, don’t necessarily think the cast-iron frying pans are doing much to help you.

Iron skillets were common in rural homes in Tuscany (Italy) and Burgundy (France) in the 1300s.

One of the many things Reuben’s Delicatessen in New York was famous for was its Apple Pancakes. They made them in 30 cm (12 inch) cast-iron skillets, which they never washed.

This web site generates income from affiliated links and ads at no cost to you to fund continued research · Information on this site is Copyright © 2022· Feel free to cite correctly, but copying whole pages for your website is content theft and will be DCMA'd.
Tagged With: Frying Pans, Pans