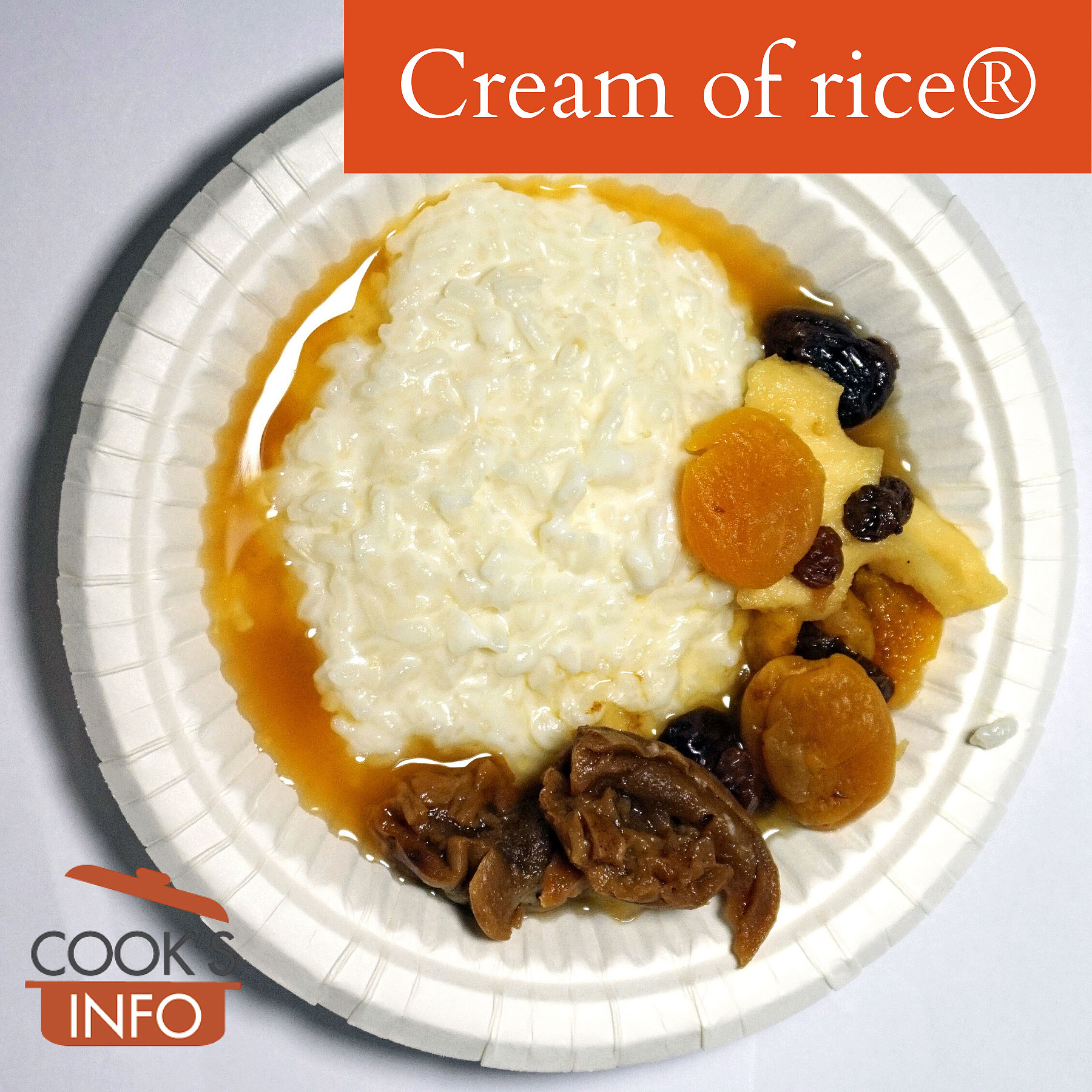 Cream of rice is best known today as the trademarked name of a breakfast cereal. However, it is also the name of a soup, and a dessert.

“Cream of Rice®” is the trademarked name of Nabisco’s version of  a bland, coarse flour made from ground, uncooked rice.  It’s enriched with ferric phosphate (iron source), niacin, thiamine mononitrate (vitamin B1), and riboflavin (vitamin B2.)

Uncooked, it has the consistency of fine sand.

To prepare it, you cook it with water to the consistency of a porridge. There’s a regular 10-minute version, and an instant ½ minute version. The instant version is made from already-cooked rice.

In North America, it is used as a hot cereal for infants and people with gluten allergies. Many other people profess to dislike it intensely — but someone’s buying it.

There are generic versions of this, known under various names such as coarse rice flour and ground rice. (They won’t of course necessarily have the vitamin fortification of the trademarked product.)

In southern India, they will refer to this grind of grain as sooji (aka rava), which can be ground from rice or wheat. Fans of another Indian dish, uppuma, say the best uppuma is made with the rice version of sooji (i.e. rice flour.)

Cream of rice is also the name of a generic soup that uses rice as a starch thickener. Here’s a recipe from 1893:

“Cream of rice soup: One pint of chicken stock, 2 tablespoonfuls of rice, 1 stalk of celery, a slice of onion. Cook slowly for 2 hours. Put through a sieve and add a pint of hot milk and a little butter, pepper, and salt.” — Sandusky Daily Register. 16 May 1893. Page 3, col. 6.

Cream of rice can also be used as the name of a dessert. One such dessert was a moulded, chilled pudding described thusly in 1910:

“Heat one cupful of steamed rice in one cupful of rich milk, sweetened with one-third cupful of sugar. Add one-third box of gelatine soaked until soft in one-quarter cupful of cold water, and stir until dissolved. Add one-eighth tablespoonful of salt. When the mixture is cold, but before it has begun to thicken, beat in one cupful of cream whipped stiff. Turn into a mold and set on ice. Serve with crushed strawberries, sweetened or any slightly tart sauce.” — Cream of rice pudding. Household Hints Column. The Fargo Forum and Daily Republican. 21 October 1910. Page 8, col. 4. 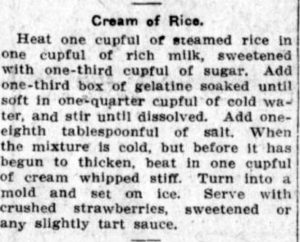 Another cream of rice dessert was an unmoulded pudding, with no gelatine, that could be served hot or cold:

“Cream of Rice Pudding – Three cupfuls of milk, three tablespoonfuls of rice, one-half cupful of sugar, and nutmeg or vanilla flavoring. Wash the rice, put it with two cupfuls of cold water on back of stove until it comes to boiling point, then add the three cupfuls of milk, the sugar, and flavoring, and place pan in slow oven for three or four hours. Every time a crust forms on top stir it until just before taking from the oven. Eat hot or cold and without sauce.” — Rice recipes. Prince Rupert Journal. Prince Rupert, British Columbia. 22 July 1910. Page 4, col. 4. 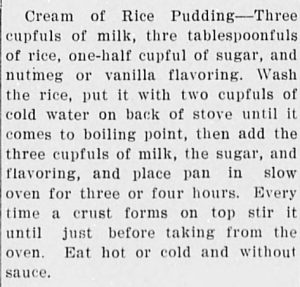 No doubt there were many other variations of cream of rice meaning a dessert based on sweetened, flavoured rice starch.

You can use Cream of Rice® breakfast flour as a substitute for rice flour in many dishes.

CooksInfo is not clear on when Cream of Rice® was first launched, however we are aware of it appearing in grocery store ads as early as 1913. 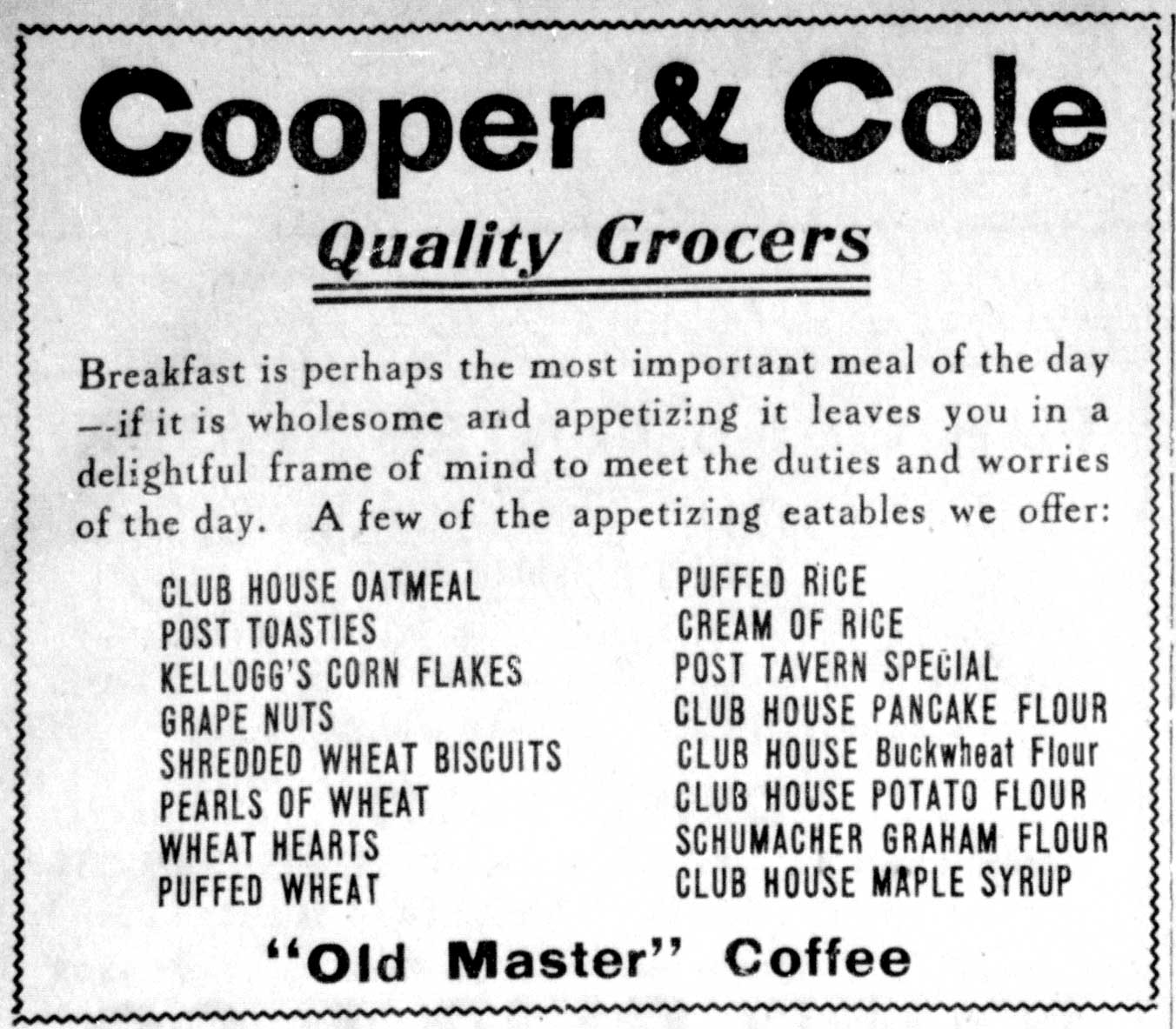 Advertisement of Cream of Rice for sale, along with other breakfast cereals. Bryan Daily Eagle. 18 February 1913. Page 2, Col. 1.

Cream of Rice® flour is sometimes referred to as “semolina made from rice.”

This web site generates income from affiliated links and ads at no cost to you to fund continued research · Information on this site is Copyright © 2022· Feel free to cite correctly, but copying whole pages for your website is content theft and will be DCMA'd.
Tagged With: Porridge, Rice