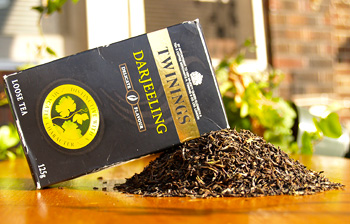 Darjeeling is the name for tea grown in the Darjeeling area of West Bengal, India.

The term is more a geographic designation of where the tea is from, than the type. The tea leaves are usually from the Camellia sinensis var. sinensis bush, which has small leaves, but a grower might decide to try another bush. The leaves are usually processed to make a black tea, but they could be processed into green or even white tea.

The tea has to be both grown and processed there. [1]

The first first harvest is in March; the second in May and June; third in the summer and fourth in the fall. From December to February, there is no harvest.

Fans recommend drinking Darjeeling without sugar, either black or with a bit of milk.

[1] “is cultivated, grown or produced in the 87 tea gardens in the defined geographic areas and which have been registered with the Tea Board; • has been cultivated, grown or produced in one of the said 87 tea gardens; • has been processed and manufactured in a factory located in the defined geographic area;” — Tea Board of India. About Darjeeling Tea. Retrieved September 2010 from http://www.teaboard.gov.in/inner1.asp?param_link_id=610&mem_link_name=About%20Darjeeling%20Tea