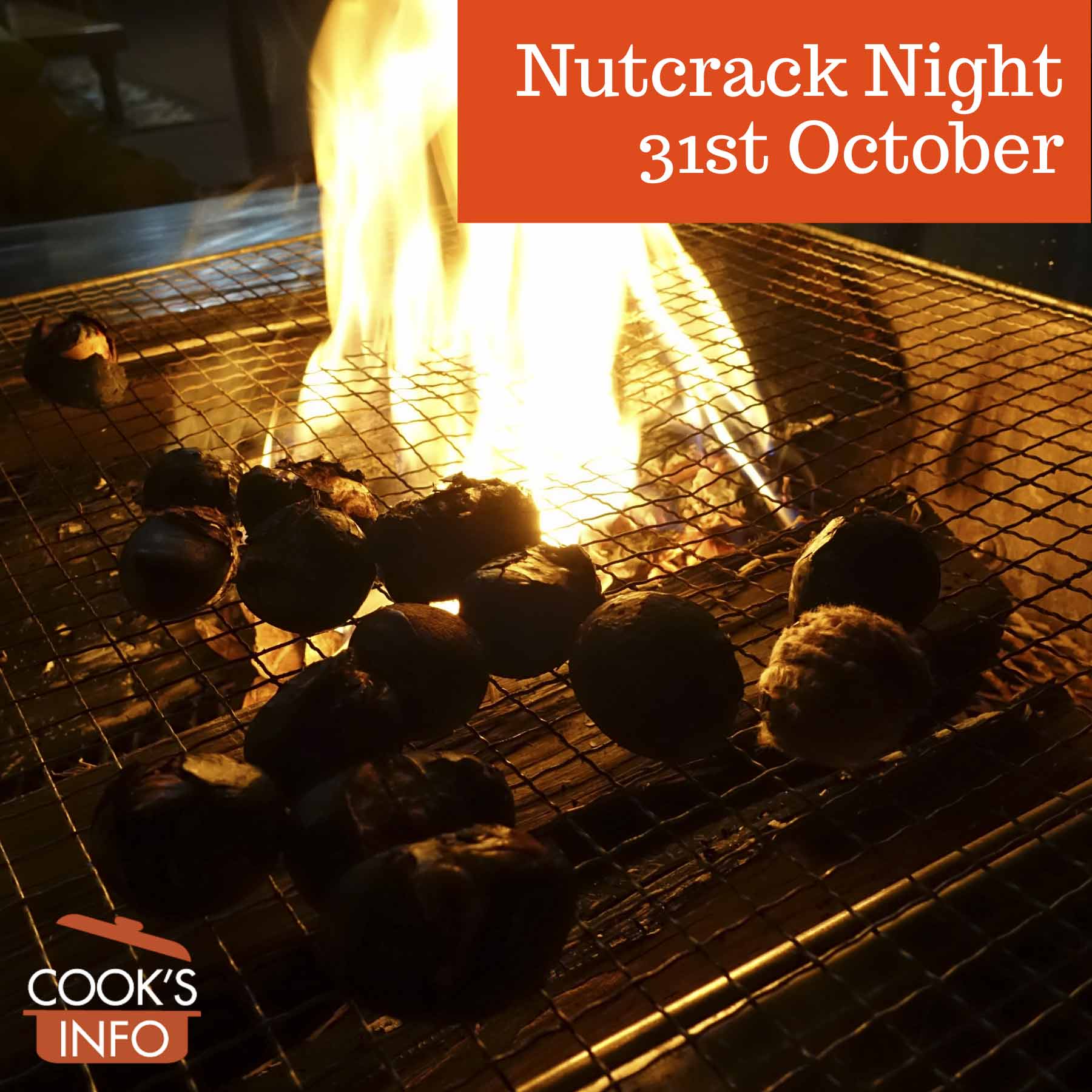 The 31st of October is Nutcrack Night.

This being All Hallows’ Eve, also known as Hallowe’en, traditionally many food related activities were taking place tonight such as apple games, carving of turnips, special Samhain bannock being baked, etc. In Scotland and Ireland, there was also the “nutcrack” tradition of fortune telling tonight.

Tonight, amidst all the other snacks and activities going on, you would roast nuts to snack on by or over the fire, because this was after all the time of the year when newly-harvested nuts were in abundance.

But while doing so, you would put a few very close to the fire, or right in it, to watch how they burned. How they burned would tell a fortune. You’d name both nuts: typically one would be yourself, and another a love interest of yours. If one popped and jumped away, or rolled away, from the other, then that was a bad omen: it meant one sweetheart moving away from the other. If both nuts stayed side-by-side and burned steadily, then the flame represented passion and true love. Presumably nothing prevented you from giving the nuts the names of another couple you knew, so that you and your friends could know how their story was going to end up.

The nuts used could be be hazelnuts or chestnuts, but Celtic tradition attached a particular mysticism to hazelnuts.

The minor English poet John Gay wrote a poem about this custom in 1714:

“Two hazel-nuts I threw into the flame,
And to each nut I gave a sweet-heart’s name.
This with the loudest bounce me sore amaz’d,
That in a flame of brightest colour blaz’d.
As blaz’d the nut, so may thy passion grow,
For ’twas thy nut that did so brightly glow. ”

There was a further wrinkle. If the nuts caught fire, and burned with a blue flame, it indicated that spirits were nearby. This was All Hallows’ Eve after all, when the veil between the worlds of the living and the dead was thin. At bedtime, the hearth ashes might be raked smooth, and then in the morning examined for telltale footprints of spirits who had passed through during the night.

Anyone born on this evening had double-sight and might even be able to command spirits.

Two two hazelnuts. Give each a name: one your name, and other the name of someone you fancy. Put them side by side in a frying pan, and put the pan over heat. Wait to see what they do. If the nuts stay together, that’s a sign of true love. If they fly apart, or one flies away from the other, that is an ill-fated omen for the love.

“Some merry, friendly, countra folks,
Together did convene,
To burn their nits [nuts], an’ pou their stocks,
An’ haud their Halloween
Fu’ blythe that night…
The auld guidwife’s weel hoordet nits [nuts]
Are round an’ round divided;
An’ monie lads’ an’ lasses’ fates
Are there that night decided:
Some kindle, couthie, side by side,
An’ burn thegither trimly;
Some start awa’ wi’ saucy pride,
And jump out-owre the chimlie
Fu’ high that night. ” — Robert Burns (1759 – 1796). Halloween (1785).

The tradition also pervaded the north of England:

“In the north of England the night of this vigil is called NUT CRACK NIGHT. Goldsmith, in his ‘Vicar of Wakefield’, relates of a farmer’s family that they “religiously cracked nuts on Allhallow Eve.” Nuts, at this season, are made the means of divination in matrimonial affairs. We learn from Burns that in Scotland “burning the nuts is a favourite charm They name the lad and lass to each particular nut as they lay them in the fire and accordingly as they burn quietly together or start from beside one another the course and issue of the courtship will be.” Brand relates that it is a custom in Ireland, when the young women would know if their lovers are faithful, to put three nuts upon the bars of the grates naming the nuts after the lovers. If a nut cracks or jumps, the lover will prove unfaithful; if it begin to blaze or burn he has a regard for the person making the trial. If the nuts named after the girl and her lover burn together, they will be married. A writer in the ‘Gentleman’s Magazine’ for May 1784 says he has often met with lamb’s wool in Ireland, where it is a constant ingredient at a merry making on Holy Eve, or the evening before All Saints Day; and it is made there by bruising roasted apples and mixing them with ale, or sometimes with milk. Formerly, when the superior ranks were not too refined for these periodical meetings of jollity, white wine was frequently substituted for ale. To lamb’s wool, apples and nuts are added as a necessary part of the entertainment and the young folks amuse themselves with burning nuts in pairs on the bar of the grate, or among the warm embers to which they give their name and that of their lovers, or those of their friends who are supposed to have such attachments and from the manner of their burning and duration of the flames, &c. draw such inferences respecting the constancy or strength of their passions as usually promote mirth and good humour. This sacrifice of nuts on Allhallows Even is also practised in England and is thus prettily described by the poet Gay:

“Two hazel-nuts I threw into the flame,
And to each nut I gave a sweet-heart’s name.
This with the loudest bounce me sore amaz’d,
That in a flame of brightest colour blaz’d.
As blaz’d the nut, so may thy passion grow,
For ’twas thy nut that did so brightly glow.”

The Dublin poet Charles Graydon wrote, at the turn of the 1800s:

“These glowing nuts are emblems true
Of what in human life we view;
The ill-matched couple fret and fume,
And thus in strife themselves consume;
Or from each other wildly start,
And with a noise forever part.
But see the happy, happy pair,
Of genuine love and truth sincere;
With mutual fondness while they burn,
Still to each other kindly turn;
And as the vital sparks decay,
Together gently sink away;
Till life’s fierce trials being past,
Their mingled ashes rest at last.”

Post World War Two, in 1951, an English home economist wrote that the term “Nutcrack Night” was not heard much anymore, but that she still encouraged people to partake of nuts for their “nutritive value”:

“Nut meals: The new nuts are on the stalls. Nutting Day and Nutcrack Night (Halloween) are terms now seldom heard, but the spirit of them is retained in the nutritive value of nuts in the diet.” — A Housewife’s Log. Leeds, West Yorkshire: Yorkshire Evening Post. Thursday, 11 October 1951. Page 4, col. 3.

This web site generates income from affiliated links and ads at no cost to you to fund continued research · Information on this site is Copyright © 2022· Feel free to cite correctly, but copying whole pages for your website is content theft and will be DCMA'd.
Tagged With: Nuts