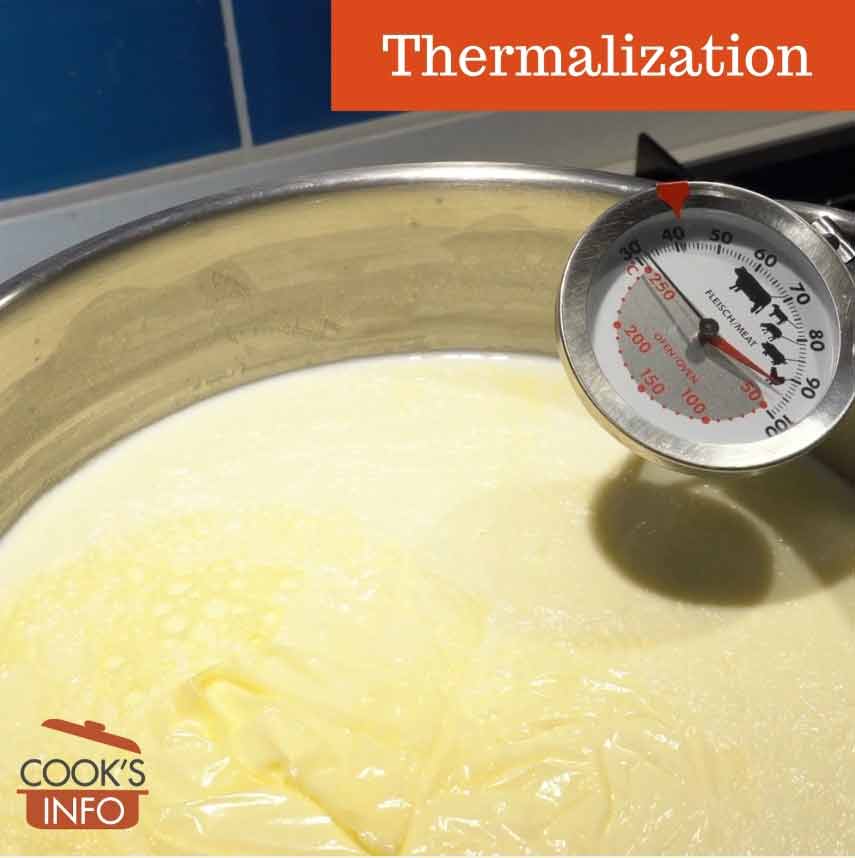 Thermometer inside pot of milk being heated. Ugurhan / Getty Images via Canva Pro.

Thermalization (aka “Thermization”) is a procedure of treating milk with heat.

The process is a harm-reduction step to reduce the bacterial loads in milk, while leaving alive some of the enzymes which some cheesemakers want to preserve. As far as strict food safety, goes, though, it doesn’t go very far: the process is “not intended to destroy any pathogens of concern.” [1]Koutchma, Tatiana. Novel Preservation Applications of UV Light. In: Preservation and Shelf Life Extension. Chapter 7. Academic Press. 2014. Pages 45-51.

The process doesn’t qualify as pasteurization because it doesn’t reach the temperature required to reliably kill Listeria which as a rough rule of thumb is 72 C / 73 C and above.

Some people also use the term “thermalization” to mean “reheating.”

The American Food and Drug Administration (FDA) regards thermalized milk as unpasteurized, and still requires cheeses made with it to be aged for the standard 60 days that unpasteurized milk cheeses must be aged for.

On the other side, some cheese purists object to cheeses made from it being called unpasteurized milk cheeses. They say the process inactivates some of the desirable bacteria, affecting the taste of the cheese. They maintain that any temperature above the body temperature of the cow is detrimental.

Some cheeses in France that are supposed to be made with raw milk according to their AOC designation are made with thermalized milk.

This web site generates income from affiliated links and ads at no cost to you to fund continued research · Information on this site is Copyright © 2022· Feel free to cite correctly, but copying whole pages for your website is content theft and will be DCMA'd.
Tagged With: Pasteurization