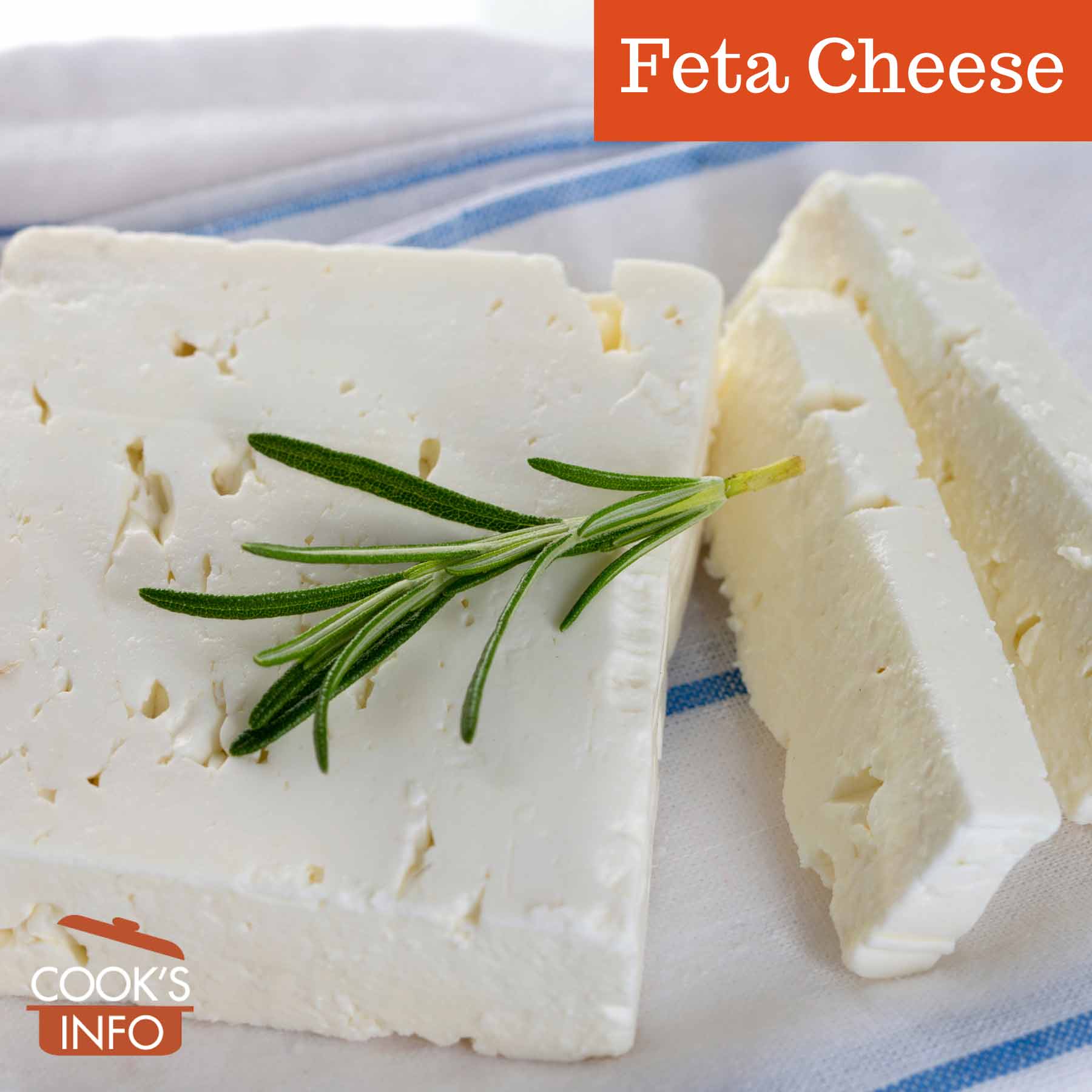 Feta is a soft, rindless white cheese with holes in it.

Feta has a salty, clean taste. It doesn’t slice well; it is meant to be crumbled. You can buy feta in brine or cubed in oil. At deli counters in stores, it is usually sold in brine.

Genuine feta is made either from 100% sheep’s milk, or sheep’s milk with up to a maximum 30% goat’s milk added.

An issue with genuine Greek feta is that though Greece produces approximately 123,000 metric tons of feta cheese annually (as of 2018, up from 115,000 in 2005), [most of that goes] for domestic use, leaving Greece unable to supply the world with genuine feta. [1]Defining a Name’s Origin: The Case of Feta. World Intellectual Property Organization. Accessed April 2022 at https://www.wipo.int/ipadvantage/en/details.jsp?id=5578 [2]Cornall, Jim. Everything you wanted to know about Feta. Dairy Reporter Magazine. 3 January 2020. Accessed April 2022 at https://www.dairyreporter.com/Article/2020/01/03/Everything-you-wanted-to-know-about-Feta

Feta made from cow’s milk

In areas that don’t recognize the legal definition of the term “feta cheese”, it is mass-produced with partially-skimmed cow’s milk.

In Greece, feta cheese made with cow’s milk has another completely different name: Telemes.

While the milk is being curdled with rennet, no heat is applied. The temperature is kept between 24 and 36 C (75 and 97 F ). The whey is drained off, the curd cut into large cubes, and put into moulds to drain further. Then it is salted, let rest a while, then placed in brine to age for at least two months. The heavy salting in the brine stops all activity of the microsobila and other bacteria in the cheese. [3]Davidson, Alan. The Oxford Companion to Food (Oxford Companions) (p. 164). OUP Oxford. Kindle Edition.

The Oxford Companion for Food suggests that owing to the brining, feta could be thought of as a “pickled cheese”. [4]Ibid. P. 164

Hard feta is crumblier and not as moist as regular feta; you can grate or slice hard feta. It also has a stronger and saltier taste and smell. “Hard”, though, is a bit of a misleading adjective; it’s actually semi-firm.

In France, the cheese is sold under other names such as “Valbreso”.

Be careful about salting any dish or salad that you are using feta in — with the saltiness of the cheese, you may not need much if any salt at all. Some food writers say that it melts well, but for the most part, the opposite is true — that it retains its crumbled shape well.

If you find your feta too salty, some people suggest that you can rinse it, but saltiness is the point of this cheese. If you find it too salty, you should be buying a different cheese.

Mexican cotija cheese, well-aged chèvre (granted both of these are likely going to be harder to find than feta which is everywhere these days, which means you probably shouldn’t need a substitute.)

Feta won’t store for a long time, so keep in refrigerator and use within a few days.

The brine to store feta in should be 1 part salt to 3 parts water, and should cover the cheese completely.

Beware of the following quote from Homer being hauled out to show that feta is thousands of years old:

“… and he milked the sheep and bleating goats, let half of the white milk coagulate and set it away in tightly woven baskets for settling and firming”
— Homer, The Odyssey.

Homer makes no mention of the salting which is essential to feta; and no doubt thousands of different types of now-forgotten cheeses have been made this way throughout history.

In 1992, the European Union began consideration of giving “protected status” or “Protected Designation of Origin” (PDO) to the name “feta”, so that it would only apply to feta cheese made in Greece. The EU changed their mind after intense lobbying. One of the countries that fiercely lobbied against it was France; the irony will not fail to strike anyone who knows how vigorously the French work at getting protected monopoly status for their own products.

Greece hauled out its lawyers, dug out (dubious) references to cheese in Homer, and on 14 October 2002, the EU granted PDO status to feta. The new rules state that not only can feta only be made in Greece, but also that the milk used for genuine Greek feta must come from either Macedonia, Thrace, Thessaly, Central Mainland Greece, the Peloponnese or Lesbos.

Of course, French farmers by the thousands hit the streets in protest — probably the same ones that routinely protest when someone outside of France tries to appropriate a French cheese name. Nevertheless, the EU ruling stood, and EU members other than Greece were given until 2007 to call their feta another name, or stop making it altogether.

Despite Greece’s drawing on thousands of years of history to define the feta tradition to which they claim ownership, storing the cheese in brine appears to be a recent innovation, possibly as recent as 1898, as a way of preserving the cheese long enough to ship.

When you think feta, you likely think Greek salad. What most people don’t know is that while Greek salad does have feta cheese in it, genuine Greek salad has no lettuce in it — that’s an American adaptation.

Feta in Greek means slice, which is pretty much the last thing you can successfully do with most feta, but the name actually refers to either the curds being sliced or how the cheese is sold in the market.

It is related to the Greek (modern, not ancient) word “tyripheta”, which means cheese slice, which in turn possibly derived from the Italian word “fetta”, meaning a slice of any food.

Defining a Name’s Origin: The Case of Feta

This web site generates income from affiliated links and ads at no cost to you to fund continued research · Information on this site is Copyright © 2023· Feel free to cite correctly, but copying whole pages for your website is content theft and will be DCMA'd.
Tagged With: Greek Cheeses, Greek Food